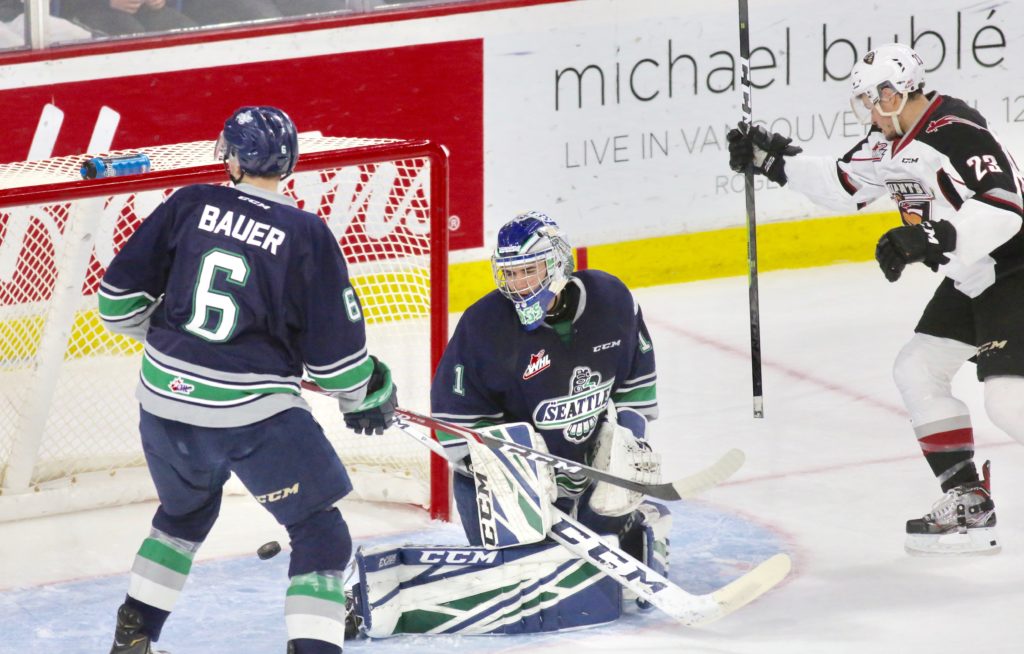 The Vancouver Giants have pushed the Seattle Thunderbirds to the brink of elimination. Friday night at the Langley Events Centre in front of 4627-strong the Vancouver Giants defeated the Seattle Thunderbirds 3-2 in Game 5. Dallas Hines broke open a 2-2 tie early in the third period to help lift the Giants to their second home victory of the series. Dylan Plouffe and Jadon Joseph scored in the first period for the G-Men who received a strong performance between the pipes from Trent Miner who made 25 saves. Matthew Wedman and Noah Phlip answered with power play goals for the Thunderbirds while Roddy Ross made 30 saves in the Seattle net.

VAN – 7:06 into the first the Giants went up 1-0 when Dylan Plouffe raced wide on a Seattle defender down the left-wing and roofed his fourth of the season over the glove of Roddy Ross. Owen Hardy and Dawson Holt earned the assists.

VAN – Then at 12:58 the Giants made it 2-0 on a power play when Jadon Joseph parked himself in front of the Seattle net, and deflected his fourth of the series up and over Ross. Dylan Plouffe added the second assist.

SEA – Back came the Thunderbirds at 14:14 on a power play of their own. Matthew Wedman skated in close on Trent Miner and tucked home a feed from Andrej Kukuca for his third of the series and his third in as many games.

SEA – 3:57 into the middle frame Seattle tied the score when Noah Philp (2) one-timed an Jarret Tyzska pass through Trent Miner from the left-wing circle. Andrej Kukuca posted his second assist of the game as well on that play.

VAN – With a delayed penalty on the way to Seattle the Giants ended up securing the game-winning goal at 4:43. Owen Hardy fed Bowen Byram at the point. Byram beat the defender wide down the right-wing, cut to the front and placed a low shot on the Seattle goal. Roddy Ross made the save but the rebound came right to Dallas Hines who pinched from the left-wing point and stuffed it home for his second goal of the series. That goal would stand as the game-winner giving the Giants the 3-2 win and the 3-2 series lead.

Seattle: 2/5 on the Power Play

Next Game: Tomorrow night at 6:05 PM at the ShoWare Center in Seattle. The Giants can advance to the second round with a victory.