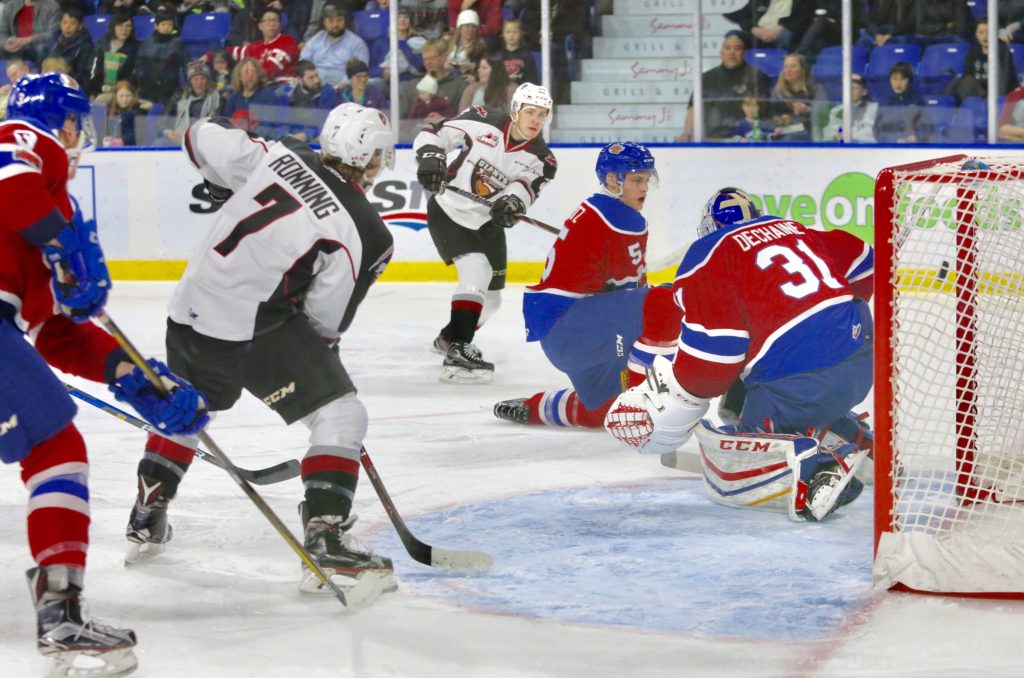 Friday night at the Langley Events Centre in front of 3484 strong, the Vancouver Giants earned their fifth straight home-ice victory with a 2-1 decision over the visiting Edmonton Oil Kings. Tyler Benson scored once and added an assist in the first 3:04 of the game to stake the Giants to a lead and goaltender David Tendeck and a young defense-corps held the fort, surrendering only one goal against on 31 shots against. Brayden Watts’ power play goal at 3:04 of the first stood as the game-winner as the Giants have now won back-to-back games this week.

The Giants caught a break 14 seconds into the action when a clearing attempt from Oil Kings goaltender Josh Dechaine took a favorable hop off the stanchion along the boards and right to Tyler Benson in the right-wing circle. Benson took two strides and slid a low shot past Dechaine and home for his 20th of the season and an early 1-0 Giants lead.

Brayden Watts then increased the Giants lead to 2-0 when he ripped home his 14th of the season on the final stages of a power play chance. Watts’ goal was set up by both Tyler Benson and Bowen Byram.

Vancouver outshot Edmonton 15-6 in the opening period, and held a 2-0 lead.

Edmonton answered with an early strike of their own in the second when Brett Kemp parked himself in front of David Tendeck and shovelled home a Conner McDonald rebound for his 14th at 1:05.

The Oil Kings dominated the shot clock in period two, outshooting Vancouver 11-6, but thanks to David Tendeck the Oil Kings were kept off the scoresheet for the remainder of the period and the game.

Edmonton outshot Vancouver 14-2 in the final period, but when it mattered most in the waning stages of the game, the Giants kept the Oil King hemmed in their own zone, not allowing Dechaine to leave his net for the extra man until there was 19 seconds remaining in the third.

The final shots were 31-23 for Edmonton but the Giants prevailed 2-1 in the end. The Giants penalty kill went three-for-three and the power play went one-for-four.

With the victory the Giants overall record improves to 31-18-5-3. Their 70 points places them just three back of second placed Victoria and 14 points up on fourth placed Kamloops for a top-three playoff spot in the B.C. Division.

Fittingly the Giants will return to action tomorrow night against the Victoria Royals (34-21-3-2) who have dropped three straight.

–       Rookie defenceman Kaleb Bulych was named the game’s first star for Vancouver. He finished the game with a +1 rating and two shots on goal.