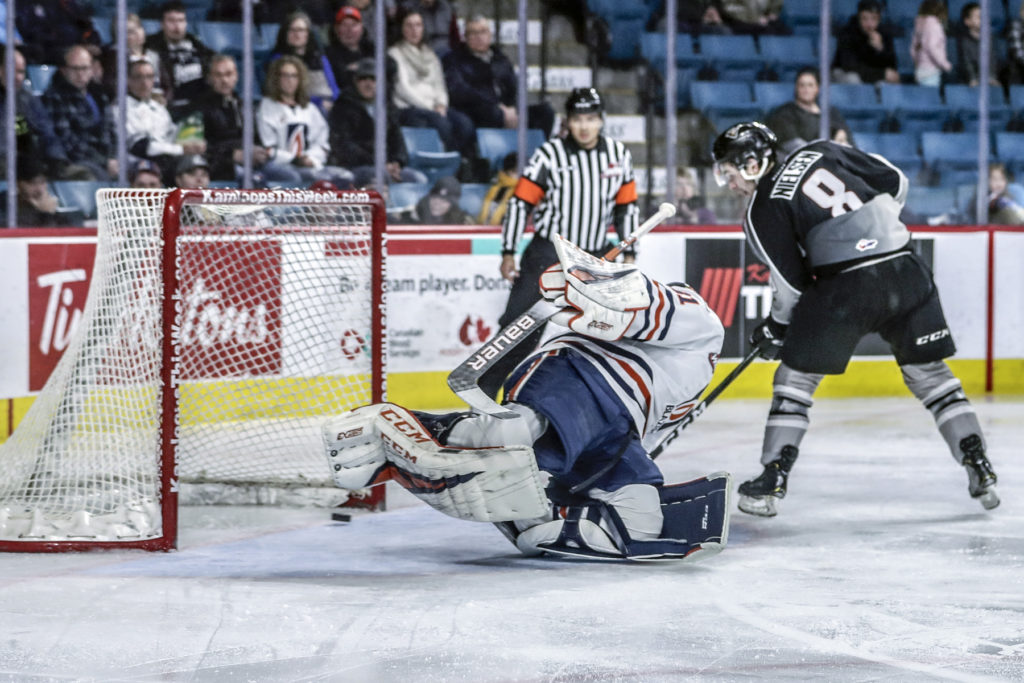 The Vancouver Giants have climbed back into the top three of the B.C. Division standings. Saturday night in Kamloops, the Giants completed a weekend sweep of the B.C. Division leading Kamloops Blazers with a 3-2 victory. Tristen Nielsen scored twice in a three-goal second period for the Giants and goaltender David Tendeck stopped 40 shots in a first-star performance. Josh Pillar and Connor Zary responded with goals for Kamloops who received 23 combined saves from Dylan Garand and Rayce Ramsay. The Giants power play continued its recent surge, going two-for-four while the penalty went three-for-three.

KAM – For a second straight night, Josh Pillar (14) opened the scoring for Kamloops. Pillar followed up a Ryan Hughes rebound and knocked it past David Tendeck at 15:21.

VAN – Tristen Nielsen (21) potted his first of two goals on the night on a breakaway at 8:49 to tie the score. Justin Sourdif and Milos Roman both assisted.

*Kamloops goaltender Dylan Garand left the game at 16:01 of the second period after a collision with Tristen Nielsen. Blazers defenceman Quinn Schmiemann tripped Nielsen on his way to the net, which caused the collision. Schmiemann was penalized and Rayce Ramsay entered the game for Kamloops.

VAN – Tristen Nielsen (22) one-timed an Eric Florchuk feed by Ramsay on a five-on-three power play, giving the Giants a 2-1 lead.

VAN – 31 seconds later Justin Sourdif (16) took a pass from Cole Shepard, skated into the slot and stuffed a low shot past Ramsay’s right pad to give the Giants a 3-1 lead.

KAM – Connor Zary (31) moved Kamloops back within one when he tipped home a cross-ice pass from Inaki Bargano at 10:46.Ryan Hughes added the second assist on Zary’s third goal of the weekend.

Next Game: A Tuesday home showdown against the Tri-City Americans at 7:00 PM.