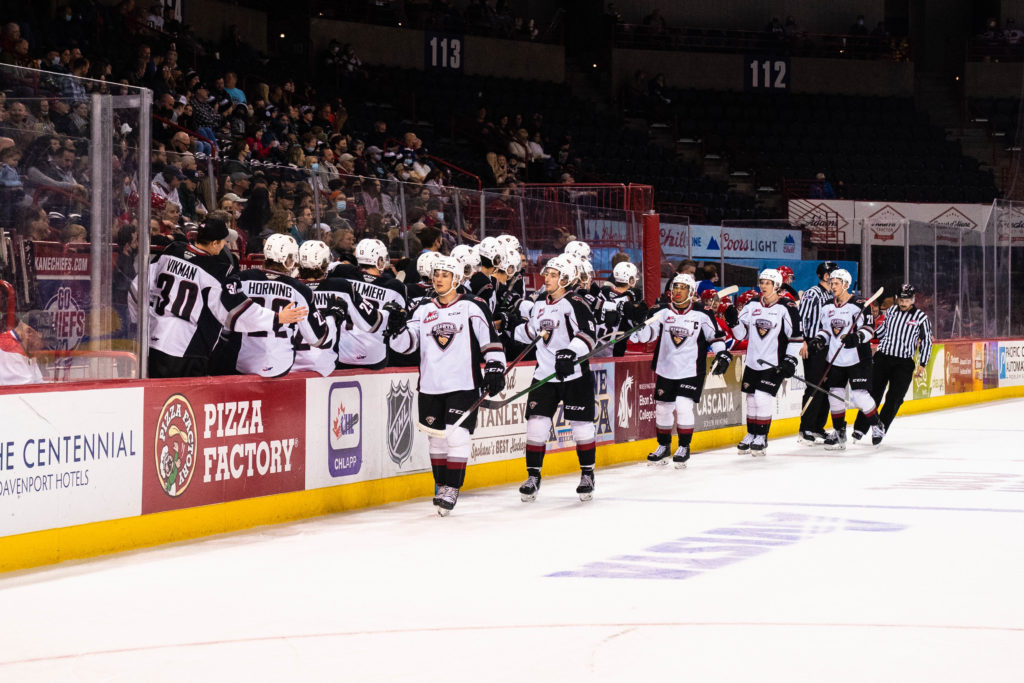 The Vancouver Giants are coming home with six of six available points from a three-game road swing down South. Saturday night at the Spokane Arena the Giants (10-7-1-0) earned a 3-1 victory over the Spokane Chiefs (4-10-2-1). Ty Thorpe (1G, 2A) and Fabian Lysell (1G, 1A) combined for five points and Will Gurski stopped 22 Spokane shot attempts to earn his second win of the season. Spokane’s lone tally came from defenceman Graham Sward on a second period power play.

GIANTS TAKE 6/6 POINTS ON THE ROAD

VAN – At 14:02, the trio of Fabian Lysell, Ty Thrope and Justin Sourdif picked up right where they left off from a night ago. It resulted in a tic-tac-toe passing play and a tap-in goal for Fabian Lysell (6) beside the left post of the Spokane goal.

VAN – Three minutes and 23 seconds later the Giants tacked on a second one. Defenceman Connor Horning took the puck behind the Spokane goal, wrapped around and slid a perfect feed in front of the net to Ty Thorpe who hammered it home for his seventh of the season. Fabian Lysell earned the second assist giving him his second point of the period.

SPO – Graham Sward put the Chiefs on the board at 2:20 of the second period off a point shot on a power play. Sward’s third goal of the season was set up by Cordel Larson and Bear Hughes and came as a result of Jack Finley screening the Giants goal.

VAN – The insurance for Vancouver came on a late power play goal courtesy of Alex Cotton. The Detroit Red Wings prospect followed up a Ty Thorpe rush and whacked a loose puck past the left pad of Manny Panghli. For Ty Thorpe it marked his third point of the game and for Cotton, his eighth goal (and fourth as a Giant).

Will Gurski: 22/23 Saves for Vancouver

Next Giants Game: Wednesday, December 1st in Kelowna against the Rockets