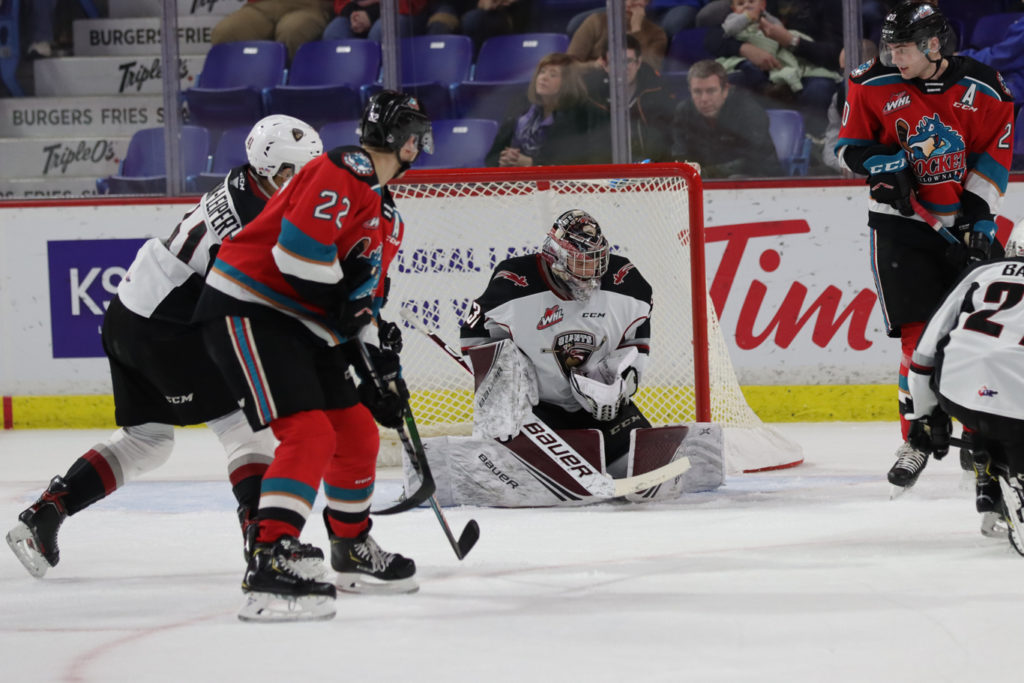 Saturday night at the LEC the Vancouver Giants (19-20-3-2) earned a single point in a 3-2 overtime loss to the visiting Kelowna Rockets (23-20-1-2). Kaedon Korczak’s power play goal at 1:58 of overtime helped the Rockets to their second victory in a row. The Giants got second period power play goals from Milos Roman (14) and Tyler Preziuso (17). Trent Miner stopped 29 of Kelowna’s 32 shots while Roman Basran made 30 saves in the Kelowna net. The win moved Kelowna six points ahead of Vancouver in the B.C. Division standings.

KEL – Matthew Wedman (12) got the offense started for Kelowna at 4:37 of the first. Wedman’s low shot from the high-slot snuck through the pads of Trent Miner off a setup from Sean Comrie.

VAN – Milos Roman tied the game for Vancouver at 6:33 on a power play. Tristen Nielsen earned the lone assist on Roman’s fourth marker of the season against Kelowna.

VAN – Tyler Preziuso then made it 2-1 for Vancouver on a power play goal that came just over two minutes later at 8:54. Preziuso took the puck from the right-wing corner and tried to center a pass across the crease, but the puck deflected off a Rockets defender and past Basran. Bowen Byram and Eric Florchuk earned the assists.

KEL – Jonas Peterek’s 12th goal of the season for the Rockets came at the 11-minute mark off a left-wing feed from Kyle Topping. Sean Comrie added his second assist of the night on the goal that made the score 2-2.

*At 18:03 of the third period, Giants forward Tristen Nielsen was assessed a five-minute major penalty for interference.

KEL – Kaedon Korczak (8) helped the Rockets clinch victory with a power play goal at 1:58 of overtime. His blast from the right-wing point was set up by both Trevor Wong and Jake Lee.

Next Giants Game: Tomorrow at 5:05 PM in Kelowna