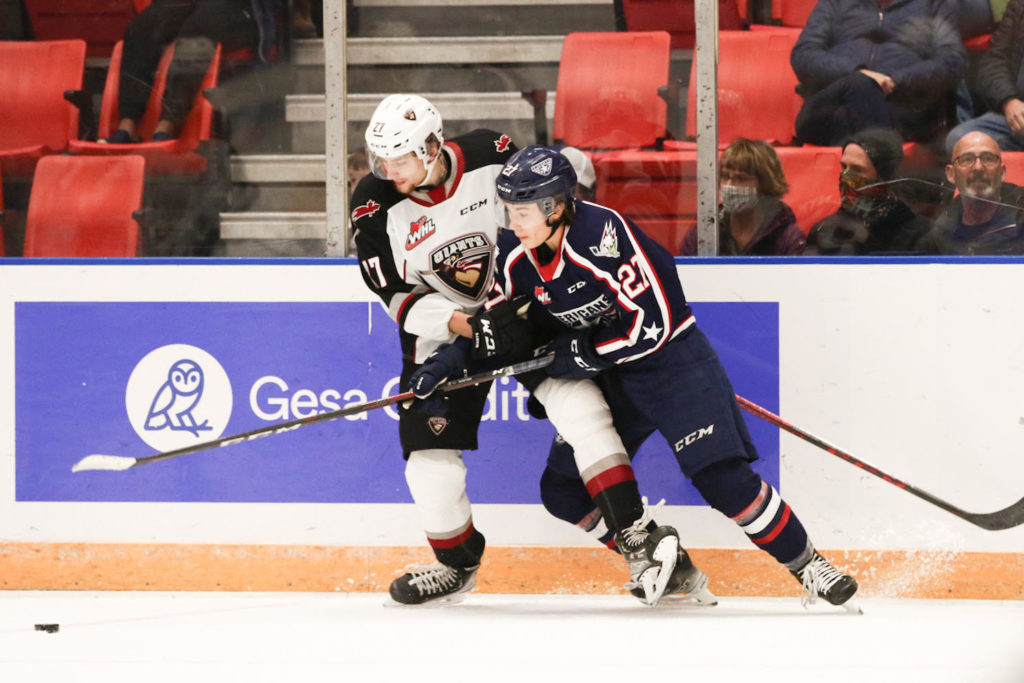 Friday night at the Toyota Center in Kennewick, WA the Vancouver Giants (9-7-1-0) earned a 3-1 victory over the Tri-City Americans (4-10-2-0). The Giants erased a 1-0 first period deficit with three unanswered goals from Ty Thorpe, Justin Sourdif and Fabian Lysell. Alex C otton added a pair of assists and Jesper Vikman made 21 saves to earn his eighth win of the season. Sasha Mutala had Tri-City’s lone goal while goaltender Tomas Suchanek made 33 saves.

TC – In just his second game of the season, Colorado Avalanche prospect Sasha Mutala opened the scoring for Tri-City by deflecting a Carson Haynes point shot through the legs of Jesper Vikman from in close. Mitchell Brown provided the second assist.

VAN – Ty Thorpe answered for Vancouver on a power play at 7:00. Alex Cotton’s initial point shot was stopped by Tomas Suchanek, but the rebound popped perfectly to Ty Thorpe in the slot and he did the rest. Justin Sourdif earned the second helper on Thorpe’s sixth goal of the season.

VAN – The Giants took the lead at 2:30 when captain Justin Sourdif took a feed from Ty Thorpe, powered his way through the slot and snapped home his eighth of the season over the glove of Tomas Suchanek. Fabian Lysell notched the second assist.

VAN – With time winding down in the third period, Fabian Lysell provided the Giants with the insurance marker at 17:06. He snuck past the defense, took an Alex Cotton feed at the Tri-City blueline and ripped a shot through Tomas Suchanek’s legs and in for his fifth of the campaign.

Next Giants Game: Tomorrow night in Spokane at 7:05 PM.