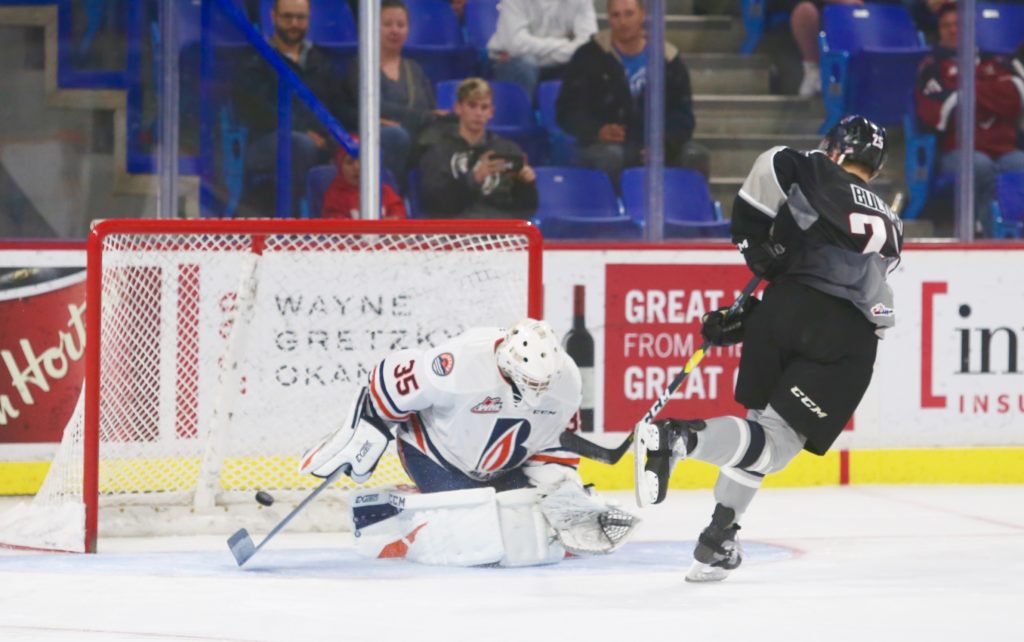 Friday night at the Langley Events Centre the Giants earned the fifth straight victory and set a new franchise record in the process. After late goals from Davis Koch and Milos Roman helped tie the game in regulation, Kaleb Bulych scored in the 13th round of the shootout to help the Giants earn a 4-3 victory over the Kamloops Blazers. Giants Goaltender David Tendeck stopped 12 of the 13 Kamloops shootout opportunities he faced in what ended matching the longest shootout in franchise history. Luc Smith countered with two goals for the Blazers.

Giants captain Jared Dmytriw opened the game’s scoring just a minute and 31 seconds into the first period. He raced down the right wing and wired a high shot up and over the right shoulder of Blazers starter Dylan Garand to secure his second goal of the season.

With under a minute remaining in the first, Kamloops tied the game when forward Zane Franklin snuck a forehand deke past the left pad of David Tendeck off a shorthanded breakaway chance. Shots were 10-8 Kamloops after one.

20-year-old Luc Smith gave Kamloops a 2-1 lead at 12:51 of the second period off the rush. He found an opening along the left-wing and one-timed home a feed from Kobe Mohr past the glove of Tendeck for his first of the season and two on the night. Kamloops outshot the Giants 9-7 in the middle period and took a 2-1 lead into the second intermission.

Late in the third, Smith helped the Blazers extend their lead to 3-1 when he hammered home his second of the game off a one-timer at 15:33.

Exactly two minutes later though the G-Men kicked off their comeback attempt.

Davis Koch moved the Giants back within one when he snuck his second of the season past the glove of Garand and under the crossbar from in close. Then, with time winding down and the net empty, Mlios Roman parked himself in front of the Kamloops goal and tipped Dylan Plouffe’s point shot home to send the 3066 fans at the Langley Events Centre into a frenzy. Roman’s second goal of the campaign came with 10.7 seconds remaining in regulation time.

Five additional minutes of overtime solved nothing, but each team had good chances. Dylan Garand denied quality looks from James Malm and Bowen Byram, while Nolan Kneen nearly ended the game for Kamloops off a re-direct that just whizzed past David Tendeck’s right goal post.

For a second time this season the Giants needed a shootout to determine their outcome, but the end result was anything but quick.

Connor Zary gave Kamloops  the 1-0 shootout lead with a goal in Round 2, which meant that Bowen Byram had to score for Vancouver in Round 3 to keep the game going. The 2019 NHL Draft prospect did exactly that, snapping a shot past Garand to give the Blazers their first of 10 opportunities to win the shootout.

Nine full shootout rounds came and went without a single player scoring from either team.

That changed in Round 13 when Giants defenceman Kaleb Bulych skated in close on Garand and stuffed a shot between his legs and in to give the Giants the 2-1 shootout advantage.

David Tendeck stopped Quinn Schmiemann’s attempt in Round 13 to clinch the victory for the Giants who finished the night zero-for-three on the power play. Their penalty kill went five-for-six. The Blazers did add a shorthanded goal.

With the win, the Giants improve their season record to 3-1 at home and 7-1 overall. They’ve won five straight games and will now head to Victoria tomorrow for a battle with the WHL’s lone undefeated team, the Victoria Royals at 7:05 PM.

– Friday night’s 13-round shootout matched the longest in Giants franchise history. They also went 13 rounds with the Saskatoon Blades on January 16, 2008.

– With 14 of a possible 16 points secured so far, the Vancouver Giants sit atop the Western Conference. Only the Prince Albert Raiders have more points than the Giants.