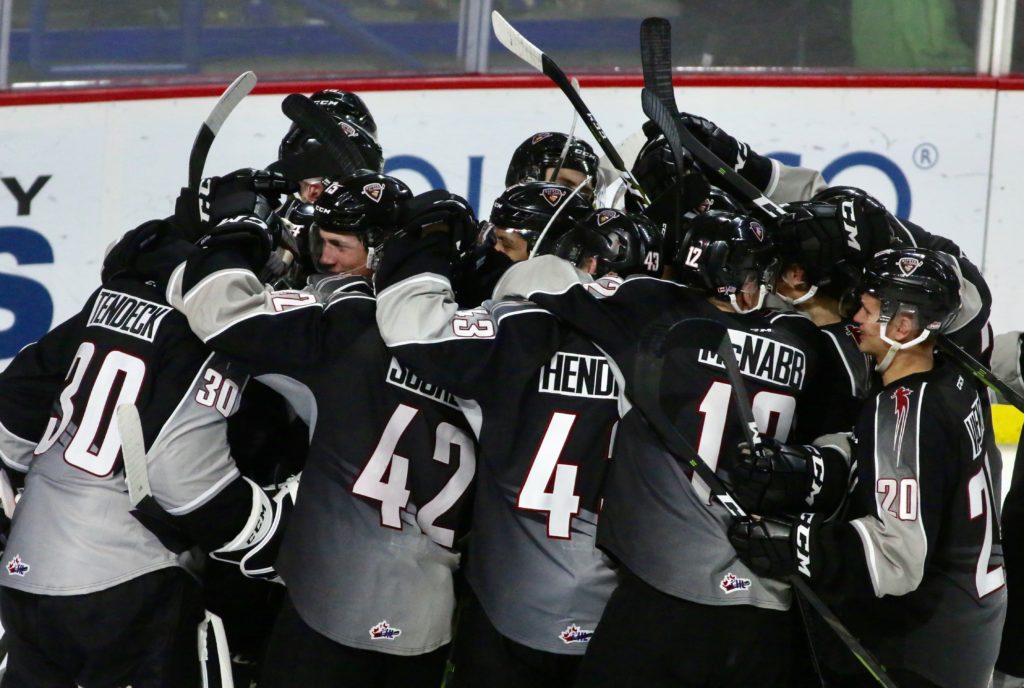 The Vancouver Giants are heading into the month of October with a 3-1 record. Sunday night at the Langley Events Centre the Vancouver Giants earned a 5-4 come-from-behind shootout victory over the Spokane Chiefs. Giants forward Brayden Watts tied the game with less than a minute to play in the third and then notched the shootout winner in Round 4 to help lift the Giants to their third win on the young season. Watts added two assists on a pair of second period markers from Bowen Byram and Kaleb Bulych. James Malm added his fourth of the season for Vancouver while goaltender David Tendeck made 20 saves on 24 shots faced. Adam Beckman responded with two goals for the Chiefs while defenceman Ty Smith chimed in with a pair of assists. Chiefs netminder Dawson Weatherill made 23 saves in defeat.

Full credit to the Spokane Chiefs who despite playing their third game in their third city in a span of three days, jumped out to a 2-0 lead within the first 12:01 of the game. Langley native Bobby Russell opened the scoring for the Chiefs off a two-on-one rush at 3:42, then rookie Adam Beckman potted his first of two on the night at 12:01 to put the Giants behind.

James Malm answered though with his fourth goal in as many games at 14:57. Malm’s tally was assisted by both Jared Dmytriw and Justin Sourdif and came mere seconds after a Spokane penalty had expired.

Shots were 9-6 after one for the Giants but they trailed 2-1.

Each team struck twice in the middle frame with the Chiefs scoring both the first and last goals. The visitors regained their two-goal cushion at 11:18 when Beckman potted his second of the night on a power play.

Late in the period Spokane restored their lead when rookie Jack Finley beat David Tendeck with a high, fluttering shot from outside the left circle. Finley’s goal came with 39 seconds remaining in the second. Shots were 15-14 Giants through two periods.

Fortunately the Giants had some late period heroics up their sleeve on Sunday. With under a minute remaining in the third period, Brayden Watts snuck into the slot, took a corner pass from James Malm and ripped his first of the season past the glove of Weatherill. Milos Roman added his second assist of the night on Watts’ game-tying tally.

60 full minutes came and went without a winner, and five additional minutes of overtime solved nothing. The Chiefs were awarded a late power play with 8.1 seconds left, but their one attempt at a goal was thwarted by a diving shot-block courtesy of defenceman Alex Kannok Leipert.

A shootout would be needed for the first time in 2018-19 and after James Malm and Riley Woods missed for their respective teams, Davis Koch put the Giants ahead 1-0 with a goal in Round 2. Adam Beckman’s attempt in Round 2 was denied by David Tendeck.

Dawson Weatherill denied Bowen Byram’s attempt to win the game for the Giants in Round 3, then Eli Zummack extended the game for Spokane when he scored on his Round 3 attempt.

Brayden Watts regained the shootout lead for the Giants in Round 4 when he snapped home a shot past the glove of Dawson Weatherill.

David Tendeck ended all hopes of a Spokane victory when he denied Carter Chorney’s shootout opportunity. Seconds later he was mobbed by his teammates.

Final shots were 27-24 for the Giants who went scoreless on their lone power play attempt. Spokane went one-for-four on their power play chances.

Next week the G-Men will take to the road for three games beginning Wednesday in Kelowna against the Rockets. That road-trip will also include back-to-back games in Prince George on Friday and Saturday night.