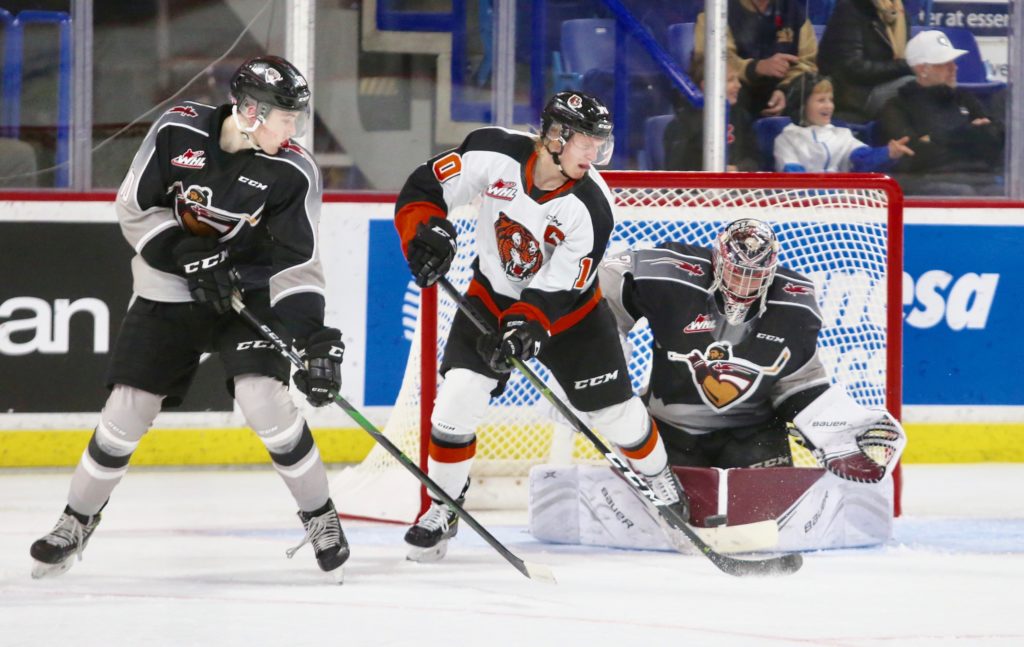 Sunday night at the Langley Events Centre the Vancouver Giants (9-8-1-0) secured their second victory in as many days. Led by a first-star performance by goaltender Trent Miner, the Vancouver Giants earned a 5-2 victory over Willie Desjardins’ Medicine Hat Tigers (10-5-1-0). Trent Miner stopped 33 shots to earn his fourth win of the season. Offensive Milos Roman and Lukas Svejkovsky each had a goal and an assist. Nick McCarry and Trevor Longo responded with goals for the Tigers.

MINER’S 33 SAVE EFFORT LEADS THE GIANTS TO VICTORY

VAN – Tristen Nielsen opened the scoring for the Giants at 13:13 when he knocked his own rebound past Tigers starter Mads Søgaard. Milos Roman had the lone assist. For Nielsen it was his ninth of the season.

MH – Nick McCarry (3) tied the game at 1:17 of the second period off a slick feed from Brett Kemp.

VAN – Rookie Zack Ostapchuk (2) restored the Vancouver lead at 16:45 when he re-directed home a shot from Lukas Svejkovsky.

VAN – Dylan Plouffe ripped home his third goal of the weekend and his fifth goal of the season at 3:02 to extend the Giants lead to 3-1. Evan Patrician extended his point-streak to three games with the assist.

MH – The Tigers crept back within one when Trevor Longo converted on a power play at 15:17.

VAN – Lukas Svejkovsky picked off a pass at the Giants blueline, and buried his fourth of the season into an empty-net.

VAN – Milos Roman then ended all hopes of a Tiger comeback with a shorthanded marker into the empty net at 19:37.

Medicine Hat: 1/6 on the Power Play

Next Giants Game: Friday night at home against the Portland Winterhawks at 7:30 PM.

cole shepard holden katzalay
A Season of Firsts: Recapping The FIrst WHL Goals for the 2019-20 Giants
11 hours ago