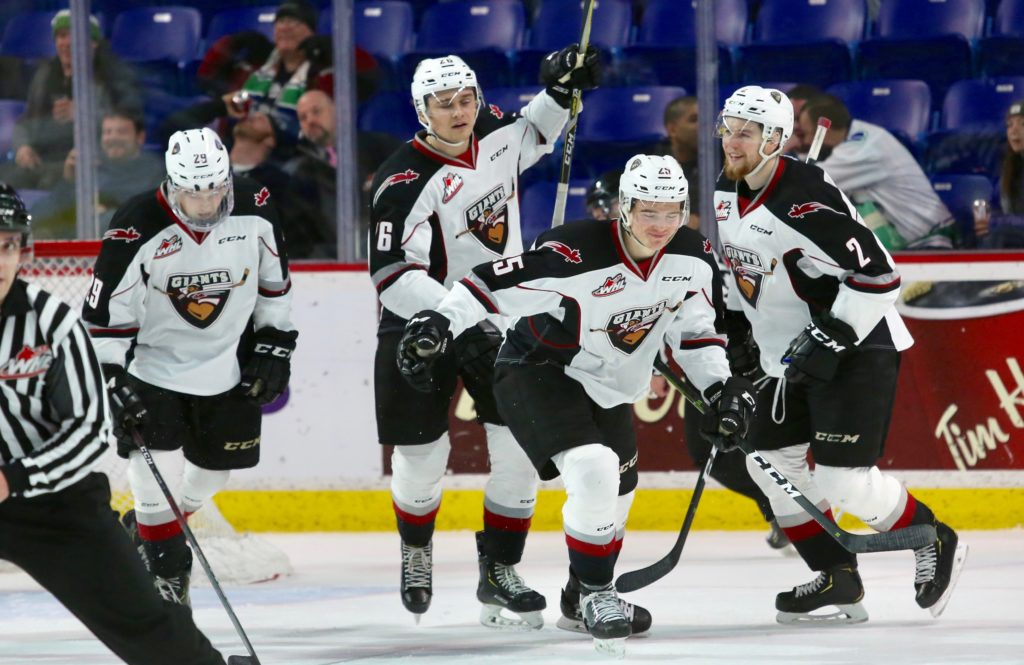 For seventh time in the 18-year history of their franchise, the Vancouver Giants have won 40 games in a single season. Friday night in front of 3900-plus at the Langley Events Centre the Vancouver Giants (40-14-2-1) earned 4-0 victory over the Victoria Royals (30-25-1-2). Kaleb Bulych, Seth Bafaro, Lukas Svejkovsky and Justin Sourdif all scored for the Giants while Arizona Coyotes prospect David Tendeck stopped all 26 shots fired his way en route to his 20th win of the season, the 50th win of his WHL career and his seventh career shutout. Royals goaltender Brock Gould stopped 30 of the 34 shots fired his way in defeat. The win moves the Giants to within one point of clinching the B.C. Division banner.

VAN – 11:15 into the second period the G-Men got on the board when Kaleb Bulych (3) wired home a shot from the right-wing point. Dallas Hines had the lone helper.

VAN – With 15 seconds remaining in the period, Seth Bafaro (5) extended Vancouver’s lead when his shot from the right-wing point appeared to tip off a Royals defender and past Brock Gould.

VAN – At 5:36 of the third, Lukas Svejkovsky made it 3-0 for the Giants when he left the penalty box, accepted a pass from Davis Koch and raced in on a two-on-one. Gould stopped Svejkovsky’s initial attempt, but the rookie followed up on his own rebound and knocked home his seventh of the season.

VAN – Justin Sourdif grabbed the game’s final goal at 16:26 of the final period of a feed from Milos Roman. Sourdif’s 18th goal of the season moves him two goals shy of becoming just the third Giants 16-year-old to reach 20 goals in his rookie season.

Vancouver: 0/3 on the Power Play

Victoria: 0/5 on the Power Play

Next Giants Game: Tomorrow night in Victoria against the Royals at 7:05 PM.