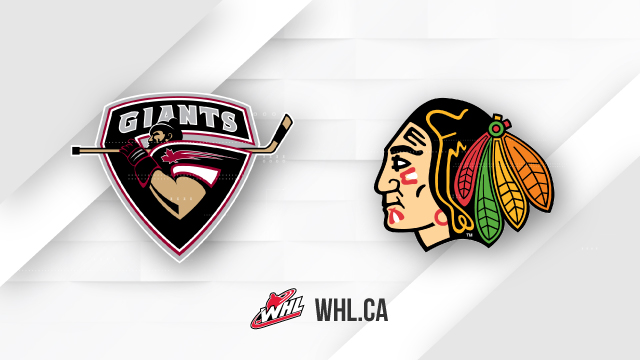 Saturday afternoon in Everett, WA the Vancouver Giants (1-1) secured a 4-3 shootout victory over the Portland Winterhawks. The Giants clawed back from three separate deficits en route to their first win of the exhibition season. Brayden Watts had two goals in regulation and Justin Sourdif had the lone goal of the shootout. Trent Miner stopped 25 of the 28 shots fired his way to earn the victory in goal. Tyson Kozak led all Winterhawks with a goal and an assist.

GIANTS GRAB THEIR FIRST WIN OF THE 2019 PRESEASON

POR – Mason Mannek opened the scoring for Portland at 5:14. Jonah Bevington and Tyson Kozak had the assists.

VAN – Just a minute and 29 seconds later the Giants answered when Jacob Gendron snapped a shot home from the top of the right-wing circle. John Little assisted on the play.

POR – Jaydon Dureau responded with an unassisted marker for Portland at 10:06.

VAN – Brayden Watts moved the Giants back even at 8:08, converting off an Alex Kannok Leipert rebound.

POR – 43 seconds later Tyson Kozak gave Portland their third lead of the afternoon off a pass from Cross Hanas.

VAN – Brayden Watts wasn’t done. He snapped home his second goal of the day over the right shoulder of Dante Giannuzzi on a power play. Alex Kannok Leipert and Tristen Nielsen had assists.

Vancouver: 1/8 on the Power Play

Portland: 0/4 on the Power Play

Next Game: The Giants wrap up their weekend tomorrow afternoon with an 11:30 AM clash with the Spokane Chiefs.