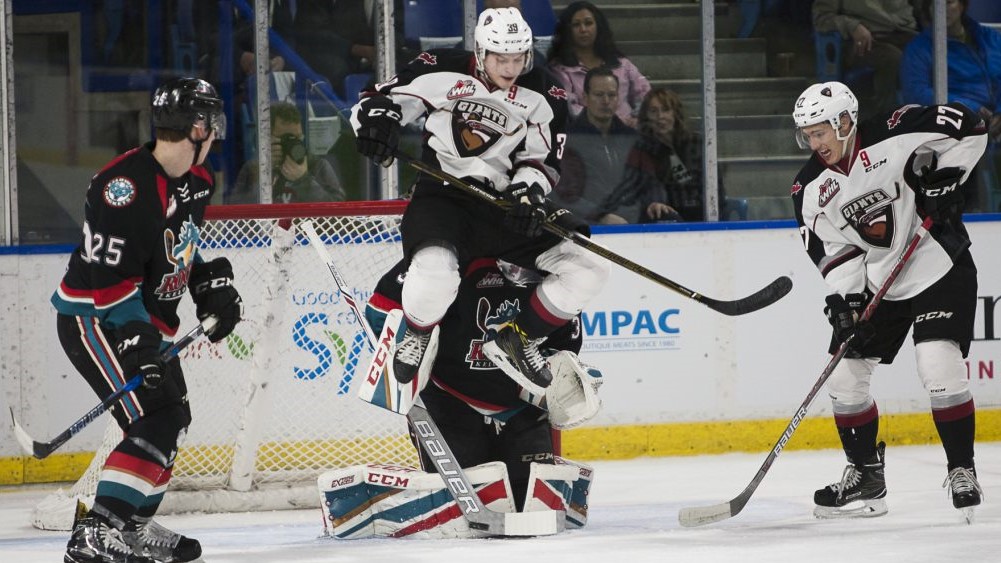 The Vancouver Giants lost their final home game of the season, dropping a 5-2 decision to the Kelowna Rockets on Saturday evening at the Langley Events Centre. Calvin Spencer and Jordan Borstmayer scored for Vancouver.

The G-Men got out to a strong start and took the lead just over seven minutes into the game when Spencer scored from the slot on a power play after a nice setup by James Malm. Kole Lind responded for Kelowna, scoring on a breakaway just 26 seconds after the Vancouver goal to tie the game. Borstmayer put the Giants in front again, answering back only 23 seconds after the Kelowna goal, when he beat Rockets goalie Michael Herringer with a shot from the left circle. Nolan Foote scored a power play marker later in the stanza to even the score again, and Leif Mattson bagged the eventual game winner with under four minutes remaining in the first period.

The Rockets extended their lead with two goals in an 11 second span in the middle frame. Devante Stephens beat Giants goaltender Ryan Kubic off the rush from the right wing before Reid Gardiner bulged the twine from the slot. Kubic was chased from the Vancouver goal after two periods. He conceded five goals on 25 shots.

David Tendeck stopped all 7 shots that he faced in the third period.

Both teams were 1-for-5 on the power play.

The G-Men will play their final game of the season against the Seattle Thunderbirds at the ShoWare Center on Sunday afternoon. Puck drop is set for 5:00pm.