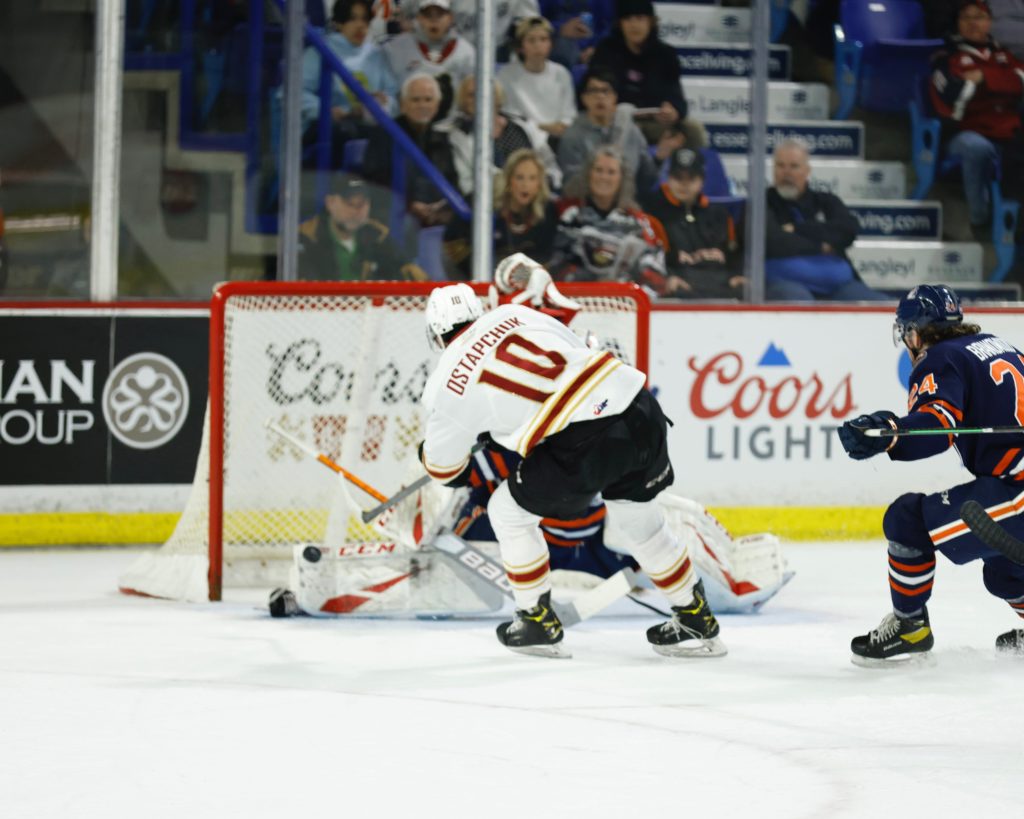 Thursday night at the Langley Events Centre in front of a spirited crowd of over 4100-strong, the Vancouver Giants dropped a nail-biting 4-2 score to the Kamloops Blazers. Logan Stankoven scored twice in the third period, including the game-winning goal on a power play with under three minutes to go in regulation time. Both Giants goals came from captain Zack Ostapchuk (2G) and both goals were set up by Fabian Lysell (2A). Jesper Vikman stopped 39 of 42 for the Giants while Dylan Garand turned away 18 of 20 for Kamloops. The Kamloops Blazers now hold a 3-1 stranglehold on the best-of-seven series with Game 5 looming tomorrow night.

VAN – 4:22 later the Giants responded when Fabian Lysell sent a breakaway pass down center ice to an open Zack Ostapchuk (4). The Giants captain outraced two defenders, skated in close and went back-hand, fore-hand before snapping a shot past Dylan Garand.

KAM – Caedan Bankier (4) opened the scoring in the second frame for Kamloops at 12:59 when he converted off a Daylan Kuefler rebound.

VAN – At the 13:39 mark in the third period, Zack Ostapchuk (5) tied the game off a deflection that came off a pass from Fabian Lysell from the right-wing. Adam Hall notched the second assist.

KAM – With 2:37 remaining in the final frame, Logan Stankoven (8) regained the lead for Kamloops on the power play as he found himself open in the left-wing circle and ripped a one-timer past a diving Jesper Vikman. The assists came from Quinn Schiemann and Luke Toporwski.

KAM – With seven seconds remaining the in the third Logan Stankoven (9) scored his second goal of the night on a power play empty-netter. The lone assist came from Quinn Schmiemann.

Next Game: The Giants and Blazers meet again for game five tomorrow night in Kamloops. Puck drop goes at 7:00 p.m.