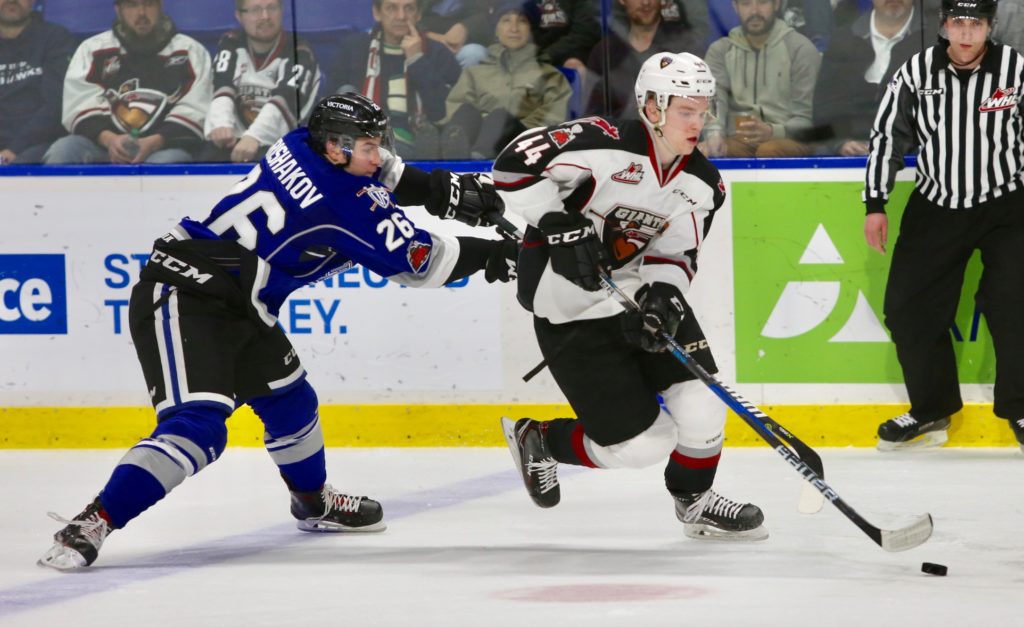 A seventh and deciding game will be needed to decide the Vancouver Giants – Victoria Royals first-round series. Monday afternoon at the Langley Events Centre in front of 4344 strong, the Giants dropped a 4-3 overtime decision. Noah Gregor’s fourth goal of the series came at 7:06 of the first overtime period, securing Victoria a Game 7 on home ice. Matthew Phillips factored in on all four Victoria goals, finishing the game with two goals and an assist. Tyler Benson had two goals in response for the Giants while Ty Ronning grabbed his first goal of the series for Vancouver. The Giants fell in Game 6 despite outshooting the Royals 42-20.

Vancouver came out flying in the opening minutes, testing Royals starting goaltender Griffen Outhouse early and often. The G-Men eventually solved Outhouse on their ninth shot of the period when captain Tyler Benson swooped into the slot, grabbed a Davis Koch pass and wired his second of the series up and over the right shoulder of Griffen Outhouse to stake the Giants to a 1-0 lead. The first period ended with the Giants up 1-0 and leading 15-9 in shots.

Jason McKee’s team outshot the Royals 12-3 in the middle period, but came up empty on four consecutive power play chances. Victoria had a good chance to tie the score at 8:36, but rookie Tarun Fizer missed wide on a penalty shot attempt which kept the game at 1-0 for Vancouver.

At 14:57 the Royals evened the score when Dante Hannoun found some open ice down the right-wing, snuck past a defender and redirected a Matthew Phillips pass up and over David Tendeck for his third of the series.

Victoria exploded for two quick strikes within the first 2:15 of the final period. Royals captain Matthew Phillips struck twice in a span of a minute and 57 seconds to vault the Royals to a 3-1 cushion. Phillips’ second goal game courtesy of the Royals first power play of the game. They’d finish the night one-for-two while the Giants went zero-for-five.

Down two goals and needing a spark, Ty Ronning picked an ideal time to bury his first goal of the 2018 Playoffs. At the 6:10 mark he skated into the right-wing circle, took a feed from Bowen Byram and placed a perfect wrist-shot through traffic and past the stick of Outhouse to make it a 3-2 game.

With time winding down in the third the Giants got back even at 14:37 when Tyler Benson spun off a check along the right-wing boards, skated to the half-boards and snuck a shot through a maze of bodies and home for his third of the series and second of the night sending the crowd of over 4000-plus into a frenzy.

The final 5:23 came and went without a goal and overtime was needed for the first time in the series. Shots through 60 minutes were 37-19 for the Giants.

Vancouver continued to carry the play in overtime, outshooting the Royals at one point 6-0. But Victoria’s first shot of overtime would be the only one they’d need.

After they finally cleared their zone after a lengthy Vancouver offensive shift, the Royals came back with speed. Matthew Phillips crossed the Giants blueline, paused and delivered a pass to the middle for Noah Gregor who skated into the left-wing circle and snapped home his fourth of the series past the stick of David Tendeck and in, cementing the Royals Game 6 victory. Gregor’s OT winner came on their 20th shot of the game.

Next up for Vancouver: A trip back to Vancouver Island for Game 7 which takes place on Tuesday, April 3rd at 7:05 PM at the Save on Foods Memorial Centre. The winner of this series will start Game 2 at home against the Tri-City Americans.