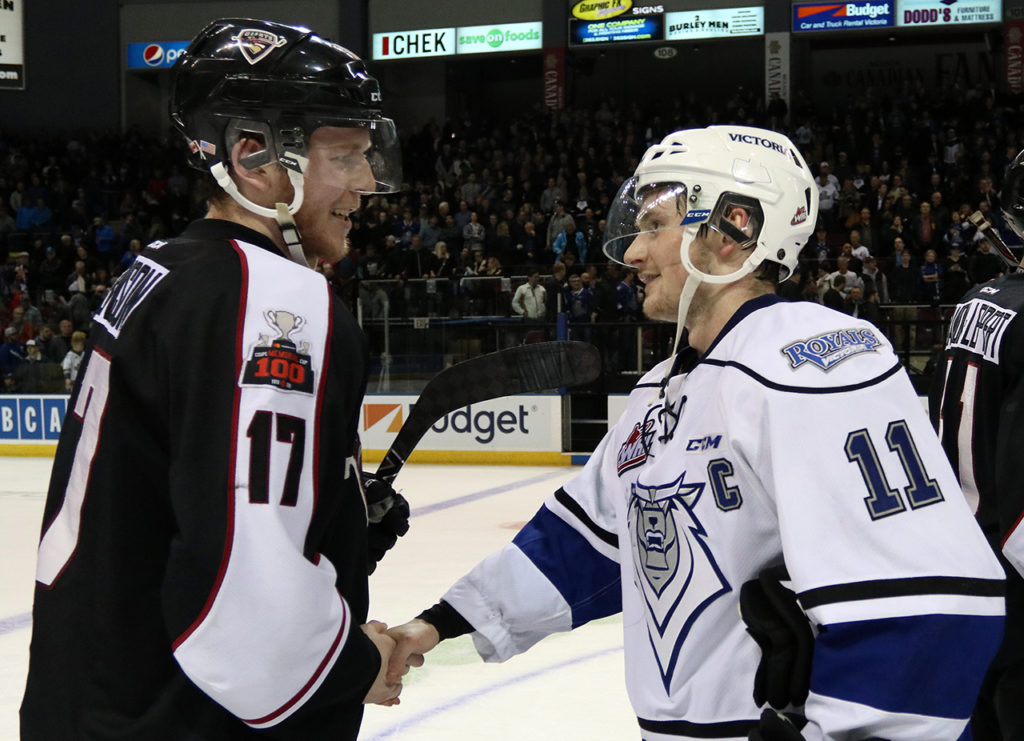 Tuesday night in Victoria the Vancouver Giants had their 17th season in the Western Hockey League come to an end after a 4-3 defeat in Game 7 to the Victoria Royals. Matthew Phillips paced the Royals attack with two goals and an assist for the Royals and Griffen Outhouse made 30 saves to help guide the Royals to victory. Tyler Popowich, Matt Barberis and Brennan Riddle responded with goals for the Giants while Tyler Benson added two assists. Final shots were 33-24 for the Giants.

Victoria took a 1-0 lead into the first intermission thanks to a late power play strike from Chaz Reddekopp. The LA Kings prospect parked himself in front of Giants starter David Tendeck and deflected home a Noah Gregor shot from the right-wing circle for his first of the playoffs. Victoria finished the night one-for-two on the power play – The Giants went without a power play for the entire game. Shots were 11-8 for Vancouver in the first period.

Lane Zablocki extended Victoria’s lead to 2-0 early in the second period when he raced wide down the right-wing and snuck his first of the series past David Tendeck a minute and 17 seconds in. Matthew Phillips then knocked home a feed from Dante Hannoun at the left side of the Giants net for his first on the night at 6:01 to make it a 3-0 Royals advantage.

David Tendeck was pulled from the Giants net at that point in favor of rookie Trent Miner.

Tyler Popowich kick-started the Giants comeback attempt at 7:49 of the second period when he snuck a backhand shot past Griffen Outhouse for his first ever WHL playoff goal.

Less than two minutes later though the Royals scored what would end up being the game-winning goal. After Davis Koch was robbed at one end of the ice by Griffen Outhouse the Royals skated back with speed. Matthew Phillips carried the puck across the blueline from the right-wing, and placed a perfect shot past the blocker of Trent Miner and in to restore the Royals three-goal lead.

Giants head coach Jason McKee opted to put David Tendeck back in the net with the score 4-1, and from then on the Royals were unable to capitalize.

Late in the second the Giants struck twice to move back within a goal. Matt Barberis made it 4-2 at 14:27 when he snuck into the slot and deflected a Tyler Benson pass by Outhouse for his second of the series.

Then with a minute and 20 seconds remaining in the period Brennan Riddle moved Vancouver back within a goal when he took a Tyler Benson feed at the left point, skated into the left circle and roofed home his second of the series over Outhouse. A 4-1 lead had quickly become 4-3 for the Royals and time expired in the middle period with the Giants holding full momentum.

That momentum carried on into the third as the Giants outshot Victoria 10-7. Large chunks of time were spent in the Victoria zone and Griffen Outhouse came up big on numerous occasions. His best save came point-blank off Dawson Holt who placed a hard, low shot to his glove side, that he managed to swat out of the way. Outhouse also got some help from the crossbar as Tyler Benson dinged a shot off the iron with time winding down in the final period.

With time winding down in the final minute, Royals forward Matthew Phillips dove in front of a Dylan Plouffe point shot, clearing the puck across the blue line, thus eliminating the Giants from the playoffs when the final horn echoed through the Save on Foods Memorial Centre.

The crowd of 6467 strong applauded both teams as they shook hands at center ice. 20-year-olds Darian Skeoch, Brennan Riddle and Ty Ronning were named the 3 Stars of the game – A classy gesture from the Victoria Royals organization who will now host the Tri-City Americans in Round 2 beginning on the weekend.

For the Giants it marks the end of a successful 2017-18 season which saw them return to the playoffs after a three-year absence.

The Vancouver Giants wish to congratulate the Victoria Royals on a successful series victory and would also like to recognize their fans, volunteers, billets, and sponsors for their unwavering support throughout the 2017-18 season.

– Tuesday’s game marked the final WHL game for 20-year-olds Darian Skeoch, Brennan Riddle and Ty Ronning. More will be revealed in the days to come about their future hockey plans for the 2017-18 season. The Giants could not be more thankful to those three individuals for representing the organization with the utmost class.

– Tuesday’s game also (likely) marked the final WHL game for Giants captain Tyler Benson. The Edmonton Oilers prospect finished the playoffs as the Giants leading scorer with three goals and eight assists for 11 points. He had at least a point in all seven games in the series. The Giants are incredibly thankful for Tyler Benson’s contributions to the Giants throughout his four-year career.

*Season-ending media availability for players and management will be announced in the days to come.