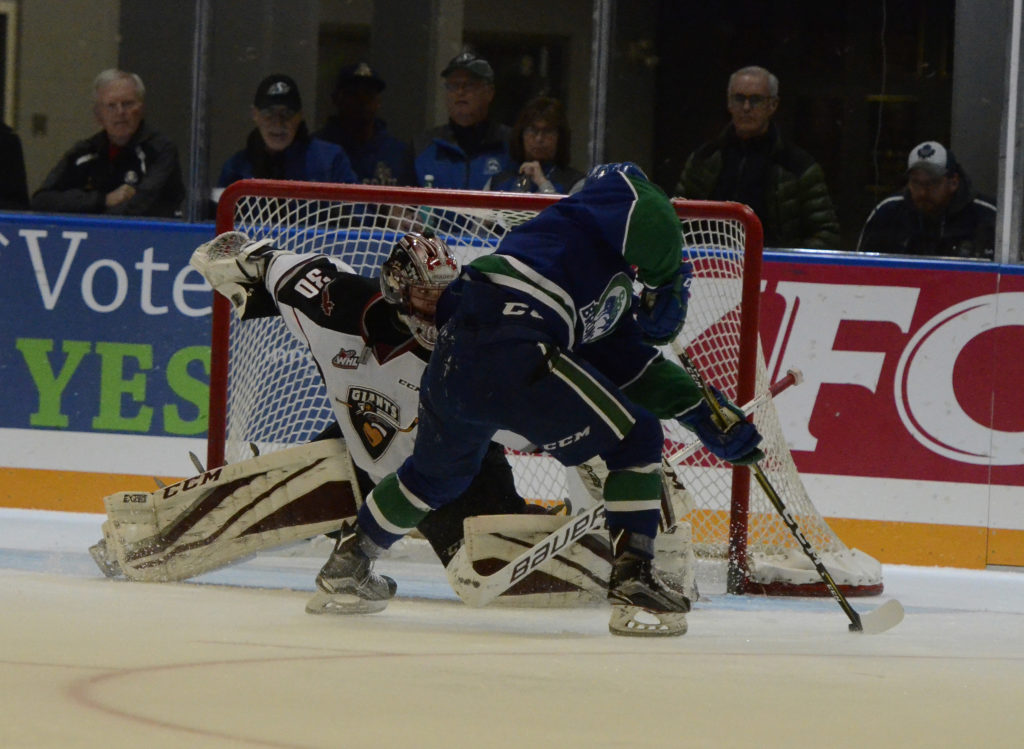 Giants head coach Jason McKee called it one of the best overall efforts he’s seen from his team since he started the job last season. The Giants threw 38 shots onto the Swift Current net and at times were dominant against the league’s top team who remain without a loss thanks to their 1-0 victory against the Giants Friday night. The league’s leading scorer Tyler Steenbergen snagged the game’s lone goal at 11:54 of the second period spoiling what was otherwise another terrific goaltending performance from Giants starter David Tendeck. At the other side veteran Logan Flodell was equally as strong stopping all 38 pucks fired his way.

Fresh off a shootout loss Tuesday, the Giants played aggressive and inspired hockey from the initial drop of the puck. They outshot the Broncos 17-12 and did a great job of containing the Broncos top trio of Tyler Steenbergen, Aleksi Heponiemi and Glenn Gawdin. David Tendeck’s first key save of the night came off a point-blank chance from Glenn Gawdin. Vancouver continued to win puck battles, force turnovers and played a strong transition game that gave them some good looks on Logan Flodell, but the 20-year-old stood his ground as well keeping the game scoreless after one.

After a back-and-forth start to the second the Broncos finally solved Tendeck when Steenbergen raced up the ice down the right wing, beat the defense wide before sneaking home a low shot home for his league-leading 16th goal of the season. The Giants pushed back and nearly tied it in the later stages, but Logan Flodell denied Matt Barberis on a pair of chances and the home side took a 1-0 lead into the final period despite being outshot 25-23.

Jason McKee’s crew kept the pedal down in the third, and Flodell made a number of clutch saves early. His best sequence of saves came off Ty Ronning who ‘just’ missed the top left corner after a desperation glove save from a diving Flodell. To his credit, David Tendeck kept his team within striking distance when he denied Tyler Steenbergen on a breakaway.

Unfortunately for the Giants they couldn’t solve Flodell and the Broncos held on to earn their eighth straight victory to start the season. The final shots were 38-30 for the Giants who killed off all three of their penalties. They finished the game zero-for-one on the power play.

The Giants record now sits at 2-4-0-1 and they’ll look to earn their first road victory of the season when they clash with the Moose Jaw Warriors Saturday night at 6:00 PM local time.