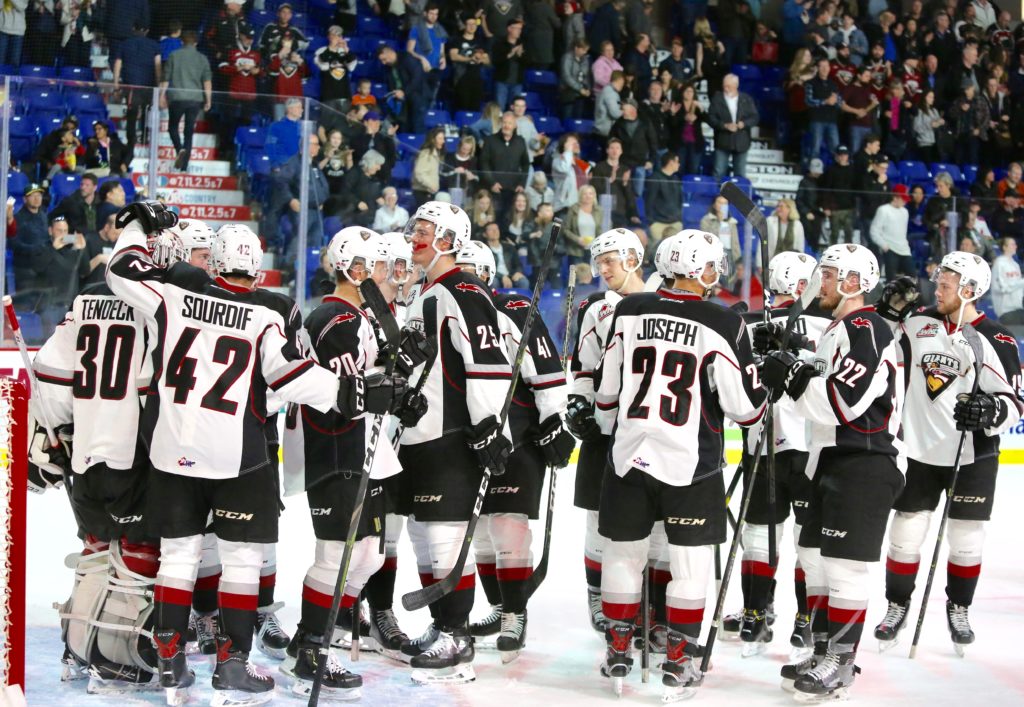 In front of the largest home crowd of the season (4917) the Vancouver Giants earned their seventh consecutive victory in the 2019 WHL Playoffs. Friday night at the LEC the G-Men earned a 4-1 victory over the Spokane Chiefs. Owen Hardy paced the Giants attack with a goal and two assists while Dawson Holt, Lukas Svejkovsky and Bowen Byram added the other markers. Arizona Coyotes prospect David Tendeck was phenomenal making 30 saves on 31 shots faced between the pipes. Adam Beckman had Spokane’s lone goal while goaltender Bailey Brkin stopped 26 of the 29 shots fired his way. It was the first road loss of the playoffs for the Chiefs.

VAN – Lukas Svejkovsky (4) got the Giants on the board with a power play marker at 6:25. His shot from the top of the right-wing circle made its way through traffic and past Brkin to put the G-Men on the board. Dylan Plouffe and Tristen Nielsen earned assists.

VAN – Just over two minutes later at 8:37, Dawson Holt (3) padded the Giants lead to 2-0 when he pounced on an Owen Hardy rebound and lifted a backhand shot over Brkin’s stick. Hardy started the play by throwing a hard check on the Spokane defender at the side of the Chiefs goal.

VAN – 57 seconds into the middle frame, Owen Hardy (4) extended his goal-scoring streak to three straight games when he one-timed home a feed from Dawson Holt off the rush. Jared Dmytriw added the second assist to give the Giants a 3-0 cushion.

SPO – The lone goal of the night for Spokane came at 5:30 when they caught a huge break off a dump-in. Ethan McIndoe started the play when he shot the puck into the Giants zone along the right-wing boards. David Tendeck left the net to try and slow the puck down behind the goal, but instead of arriving there, it took an unexpected bounce, deflected off the Giants goal-post and right to Adam Beckman who potted it home for his sixth of the playoffs.

VAN – Bowen Byram ended all hopes of a Spokane comeback at 18:06 when he placed his fifth of the post-season into the empty net to make it a 4-1 game. Owen Hardy had the lone assist on the goal giving him three points on the night.

Next Game: Game 2 of the Western Conference Championship Series goes tomorrow night at 7:00 PM from the Langley Events Centre.