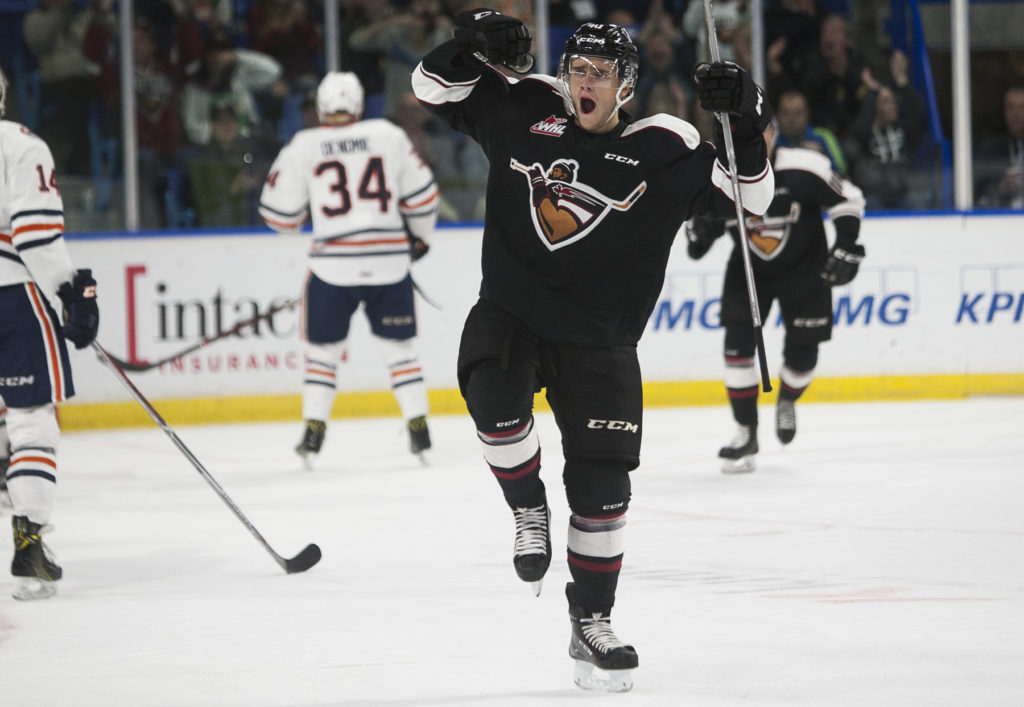 The Vancouver Giants cracked the win column for the first time in 2017-18 Friday with a 6-3 victory in front of 3240 strong at the Langley Events Centre. Milos Roman paced the Giants offense with a goal and three assists while his linemates Ty Ronning (two goals) and Brad Morrison (a goal and three assists) also made big contributions. Between the pipes David Tendeck turned aside 43 shots on 46 faced to help guide the Giants to victory. Garrett Pilon had two goals in response for Kamloops.

Jason McKee’s team struck pay dirt just 1:21 into the first when Owen Hardy crashed the net off the left wing and converted a Bowen Byram pass for his first of the season. That lead for Vancouver lasted all of 18 seconds.

Nic Holowko answered for Kamloops on the next shift when he slid a backhand shot past David Tendeck for his first of the season.

Late in the first the Giants answered with two quick tallies to restore their lead. At 16:34 Brayden Watts scored his first of the season on the power play and just over two minutes later Milos Roman snagged his first ever WHL goal to increase the Giants lead to 3-1. After 20 minutes Vancouver held a 21-15 lead in shots.

Milos Roman with his first in @TheWHL! 3-1Giants!

Kamloops answered back with a strong second period, outshooting Vancouver 16-2. But each team scored once in the middle frame starting with the Giants at 10:47. Ty Ronning rifled home his second of the season off a right-wing feed from Milos Roman. Brad Morrison also assisted on Ronning’s goal which would eventually stand as the game winner.

Garrett Pilon answered for Kamloops with a shorthanded breakaway goal at 15:09. Fortunately though the Giants managed to keep the Blazers in check for the final moments of the second and took their 4-2 lead into the final stanza.

1:28 into the final frame, Kamloops inched back within a goal when Garrett Pilon shovelled home his second of the game off a broken play in front of the Vancouver goal.

That’s as close as the Blazers would get though as the Giants rattled off two more goals in the third to cement their victory. Ty Ronning one-timed home his second of the night and third of the season at 5:30 to make it 5-3, and Brad Morrison capped the game’s scoring with his first of the season at 15:07. Morrison’s goal was assisted by Milos Roman and Dylan Plouffe.

Next up for the G-Men: A Friday-Saturday double-header at home against the Tri-City Americans. Friday’s game goes at 7:30 PM from the Langley Events Centre.