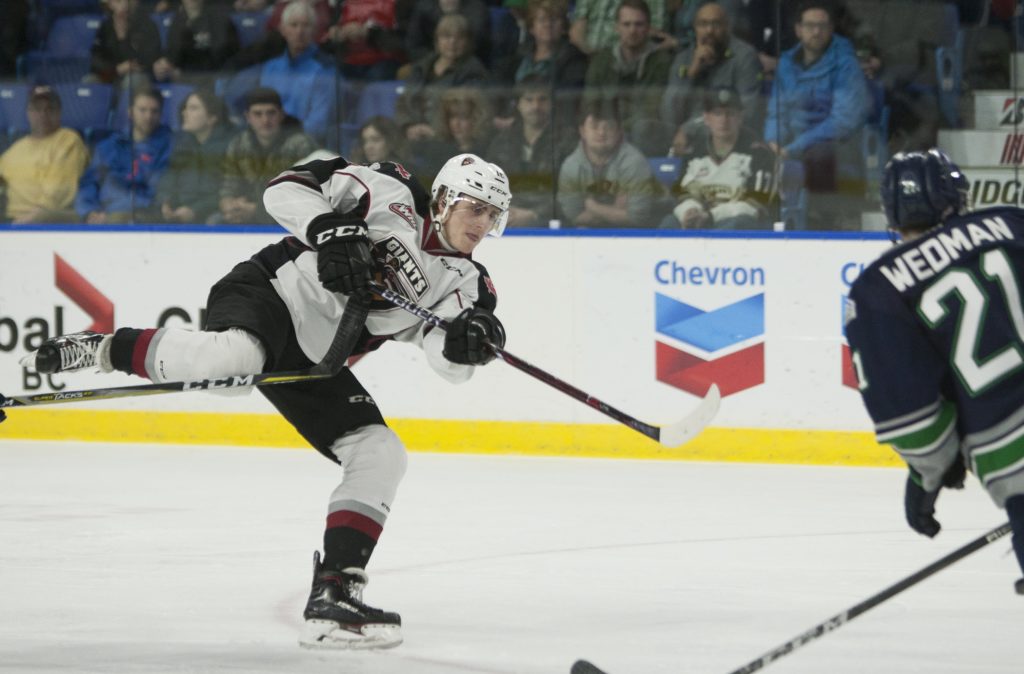 Friday afternoon in Everett, WA the Vancouver Giants kicked off the 2018 exhibition season with a 4-2 victory over the Seattle Thunderbirds. Milos Roman and Cyle McNabb each scored twice for the G-Men while the goaltending tandem of Trent Miner and Drew Sim combined to make 22 saves. Graeme Bryks and Cade McNelly supplied the goals for the Thunderbirds.

53 seconds into the first period Seattle struck first when forward Graeme Bryks knocked his own rebound past Trent Miner off the rush. Zack Andrusiak and Andrej Kukuca added the assists.

Vancouver’s power play would get them back even at 10:17 when Calgary Flames prospect Milos Roman whacked home his first of two goals on the afternoon. Roman’s goal was assisted by both Jared Dmytriw and Alex Kannok Leipert.

The power play wasn’t done. With under a minute to go in the first frame, Cyle McNabb parked himself in the slot and one-timed a feed from Matt Barberis by Seattle goaltender Cole Schwebius to make it a 2-1 game.

Shots after one period favored Vancouver 9-4.

Giants starting goaltender Trent Miner was far busier in the second period as he faced a handful of quality Seattle chances early on. Miner’s best sequence of saves came on Seattle’s third power play of the game. The offense would thank him shortly.

Cyle McNabb notched his second goal of the game at 9:57 when he converted off a Justin Sourdif pass. McNabb’s marker came right as a Seattle penalty had expired to move the Giants lead to 3-1.

Under-ager Drew Sim replaced Trent Miner in goal for Vancouver at the 10:55 mark of the second period. He played the remainder of the game. Shots were 20-16 for the G-Men through two periods.

Defenceman Cade McNelly moved Seattle back within a goal at 10:41 of the third period when his shot from the point found its way past Sim. But that’s as close as they’d come on Friday afternoon.

Some key shot blocking late from the likes of Matt Barberis and Bailey Dhaliwal, coupled with an empty-net goal from Milos Roman at 19:55 helped secure the Giants the 4-2 victory. The final shots were 26-25 for Vancouver who are now 1-0 on the pre-season.

Vancouver’s power play went two-for-six on the afternoon while Seattle power play was scoreless on all five of their chances.

Up next for the Giants: A battle with the Spokane Chiefs tomorrow afternoon at 3 PM from Everett, WA.