Giants Double Up The T-Birds Wednesday In Seattle 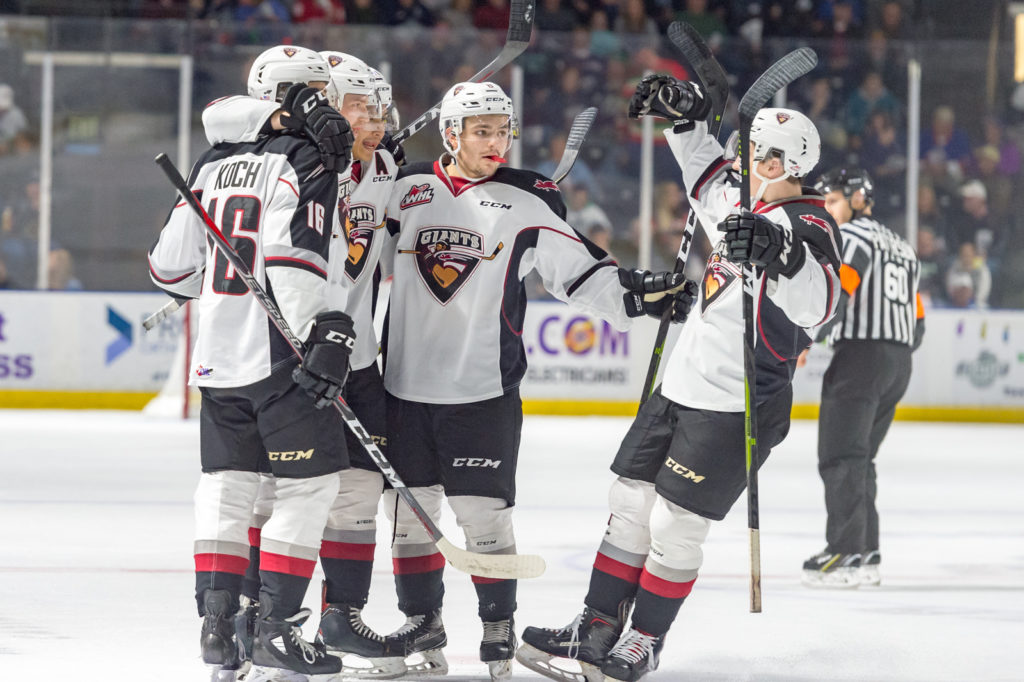 Wednesday night in Kent, WA the Vancouver Giants (15-6-2-0) earned a 4-2 victory over the Seattle Thunderbirds (8-10-3-0). Michael Dyck’s team scored the first three goals of the game and never looked back, outshooting Seattle 41-25, earning their sixth road win of the season and their first win in three tries against the Seattle Thunderbirds this season. Four Giants recorded multi-point games while Trent Miner earned his seventh win of the season in goal stopping 23 of Seattle’s 25 shots. Nolan Volcan and Zack Andrusiak responded with goals for Seattle.

Bowen Byram wasted little time getting the Giants on the board. At 5:01 he parked himself in the right-wing circle and one-timed a Davis Koch feed past Seattle starter Liam Hughes and home for his seventh of the season. Byram’s marker came on the power play. Dylan Plouffe extended the Giants lead at 14:28 when off a faceoff victory he ripped a shot through traffic and by Hughes for his third of the season. Shots were 13-7 for the Giants after one period.

Vancouver’s power play clicked again at 3:54 mark of the second period. Calgary Flames prospect Milos Roman tipped home a feed from Davis Koch for his team-leading 11th goal of the season to make it a 3-0 game. The Giants power play finished two-for-six on the night. Later in the period a Giants power play would result in Seattle’s first goal of the night. Off a miscue at the Seattle blueline, T-Birds captain Nolan Volcan raced down the right-wing on a two-on-one and placed his fifth of the season past Trent Miner at 14:37. The Giants outshot Seattle 17-10 in the middle stanza.

Lukas Svejkovsky helped the Giants regain their three-goal lead when he beat Liam Hughes on a backhand deke from in close off a failed Seattle clear. Svejkovsky’s second goal of his WHL career came at 14:13 and was set up by Owen Hardy. Zack Andrusiak scored a late power play marker for Seattle at 17:03, but that’s as close as they’d come on Wednesday night.

Vancouver Giants: 2/6 on the power play

Next Giants Game: Saturday at home against the Victoria Royals at 7 PM.