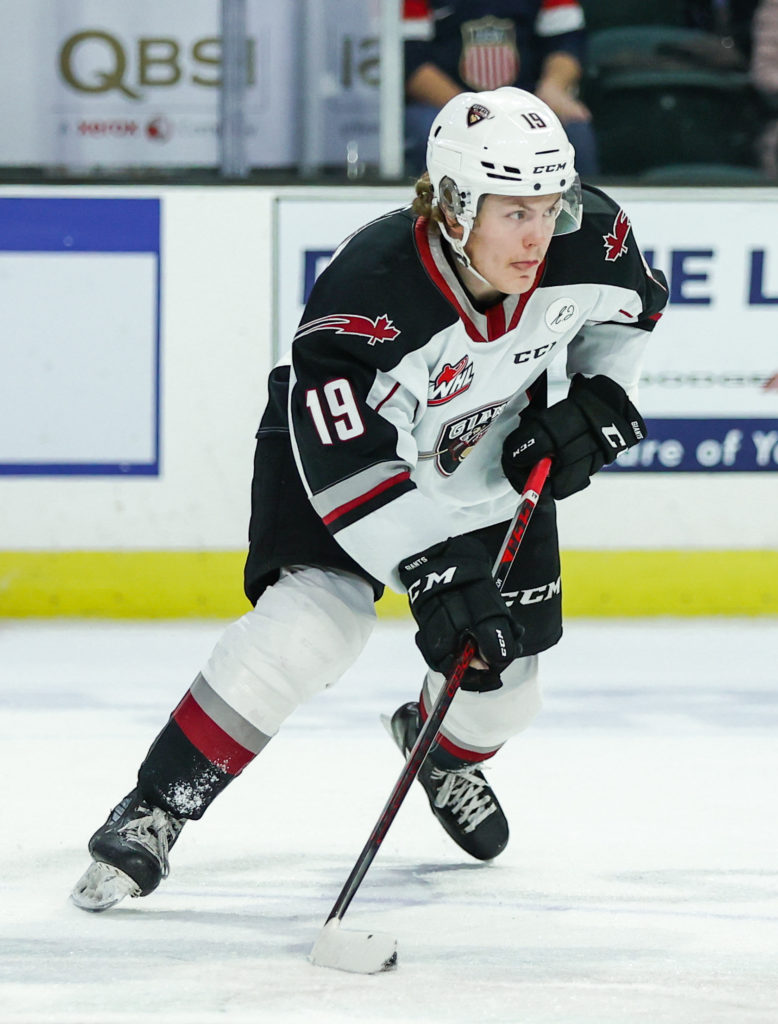 The Vancouver Giants have taken down division leaders in back-to-back nights. Saturday night in Everett, WA the Vancouver Giants (13-7-1-0) earned their sixth straight win, and their fifth straight win on the road thanks to a 6-5 come-from-behind victory over the Everett Silvertips (18-2-1-1). The Giants trailed three different times, including by a 3-1 score at the end of one, but fought their way back each time. Zack Ostapchuk (2G, 2A), Fabian Lysell (1G, 2A), Alex Cotton (1G, 2A) and Justin Sourdif (3A) all had three point efforts for Vancouver while Jesper Vikman made 43 saves between the pipes. Niko Huuhtanen had three points in response for Everett who received 23 combined saves from Koen MacInnes and Braden Holt.

EVT – Matthew Ng sent the teddy bears flying in Everett just one minute and 54 seconds into the game. Ng slid into the slot, went undetected and wired home a feed from Hunter Campbell for his fifth of the season. Michal Gut also assisted.

VAN – Ty Halaburda answered for the Giants at 6:45. Connor Horning’s original point shot was stopped by Koen MacInnes was stopped, but Halaburda pounced in the rebound and slid a backhander home for his third of the season. Fellow 16-year-old Ethan Semeniuk also assisted.

EVT – Ben Hemmerling restored the Everett lead off a faceoff victory in the Giants zone at 9:12. The puck squeezed free to Hemmerling into the left circle, and a quick shot to the glove side found its way in for his fifth goal of the season.

EVT – Jackson Berezowski extended the Everett lead to 3-1 at 15:28 when he knocked home a Niko Huuhtanen rebound for his team-leading 14th goal. The second assist on the play came via Ryan Hofer.

*Julian Cull was assessed a five-minute major penalty and a game misconduct for checking from behind at 18:38.

VAN – 20 seconds into the second, Ty Thorpe moved the Giants back within one while at four-on-four. Thorpe took the puck from his own zone, raced wide down the left wing and snapped a shot past the glove of Koen MacInnes. Alex Cotton and Evan Toth both assisted.

VAN – Fabian Lysell then moved the Giants back even at 10:35 when he finished off a Justin Sourdif rebound from at the left side of the slot. Zack Ostapchuk earned the second helper on Lysell’s ninth goal.

EVT – Jackson Berezowski gave Everett their third lead of the night on a breakaway at 12:17. His second of the night and 16th of the season was set up by Niko Huuhtanen and Alex Swetlikoff.

VAN – 42 seconds later Alex Cotton raced down the right wing and evened the score for the Giants off a shot from inside the right-wing circle that snuck past the stick of MacInnes. Cotton’s ninth was set up by Justin Sourdif and Fabian Lysell.

VAN – On their lone power play opportunity of the game, the Vancouver Giants took their first (and final) lead of the night. Zack Ostapchuk parked his big body in front of the Everett goal and deflected an Alex Cotton point shot home for his fifth goal of the season. Justin Sourdif drew the second assist.

VAN – Ostapchuk wasn’t done. He secured his second of the night and sixth of the season off a power move down the right-wing side of the ice. From there, Ostapchuk maneuvered his way to the front of the Everett net and tucked the puck home. Assists came courtesy of Fabian Lysell and Connor Horning.

EVT – Niko Huuhtanen got Everett back within one goal at 15:30 off a low shot from the left-wing circle, but that’s as close as Everett would get. The Giants kept the door shut from there, to secure the 6-5 victory.

Next Giants Game: A Wednesday night road tilt in Kamloops against the Blazers at 7:00 PM.