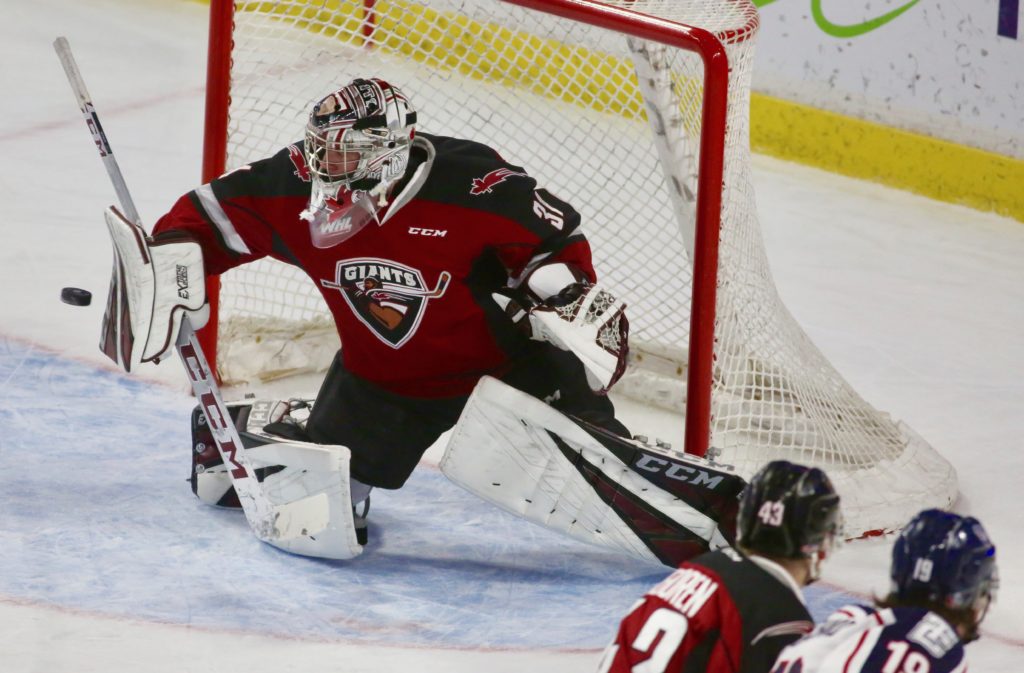 Sunday night in Langley the Vancouver Giants (20-6-2-0) became the third team in the WHL to secure their 20th victory. Aidan Barfoot, Davis Koch and Milos Roman all scored unanswered goals in the third period to help the G-Men complete a comeback from a 2-1 deficit en route to a 4-2 victory over the Tri-City Americans (14-11-1-0) at the Langley Events Centre. Jared Dmytriw also scored for the Giants while Trent Miner turned aside 24 of the 26 shots he faced in goal. Blake Stevenson and Isaac Johnson responded with goals for Tri-City who have now dropped three straight games. For the Giants it was their sixth consecutive victory and their second in as many days against the Americans.

The lone goal in the first period came at 12:15 of the first period from Tri-City rookie Blake Stevenson while shorthanded. His fifth of the season came as a result of a two-on-one rush with Riley Sawchuk. Tri-City outshot Vancouver 16-10 in the first and controlled a majority of the play.

Giants captain Jared Dmytriw netted his sixth of the season at 5:26 off a low shot from the left-wing circle to tie the game 1-1. But just over two minutes later Tri-City regained their lead when Isaac Johnson one-timed home a Samuel Stewart pass from the left circle on a power play to restore Tri-City’s 2-1 advantage. From then on, the Giants controlled the play in the second period and ended up outshooting Tri-City 15-7. Yet the score remained 2-1 Tri-City after two.

Aidan Barfoot kick-started the Giants comeback at 7:26 when he pounced on an Alex Kannok Leipert rebound and roofed his second of the season past Tri-City starter Beck Warm. Then at 13:49 on the power play, Davis Koch extended his point-streak to nine straight games for the Giants when he snuck his ninth of the season past Warm off a feed from Milos Roman. Bowen Byram added an assist on Koch’s marker. Then at 15:16, Milos Roman extended his goal-scoring streak to six-straight games when he beat Beck Warm with a shot from the left-wing circle. For Roman it was his team-leading 16th goal. Justin Sourdif and Brayden Watts both earned assists.

Tri-City:1/4 on the Power Play (Plus a shorthanded goal)

Next Giants Game: Chevrolet Teddy Bear Toss on Saturday night against the Victoria Royals at the Pacific Coliseum. Puck drops at 7:00 PM.

CUNNINGHAM ADDED TO THE WALL OF HONOUR:

Prior to puck drop tonight, the Vancouver Giants added former captain Craig Cunningham to the Wall of Honour at the Langley Events Centre. The Giants warmed up in commemorative Craig Cunningham jerseys with an “All Heart” emblem on the front. Those jerseys have all been autographed by both Craig Cunningham and the individual player and are now for sale via online auction. All proceeds from this auction go towards supporting Craig Cunningham’s “All Heart Foundation.” The auction deadline is December 6th at 1 PM.