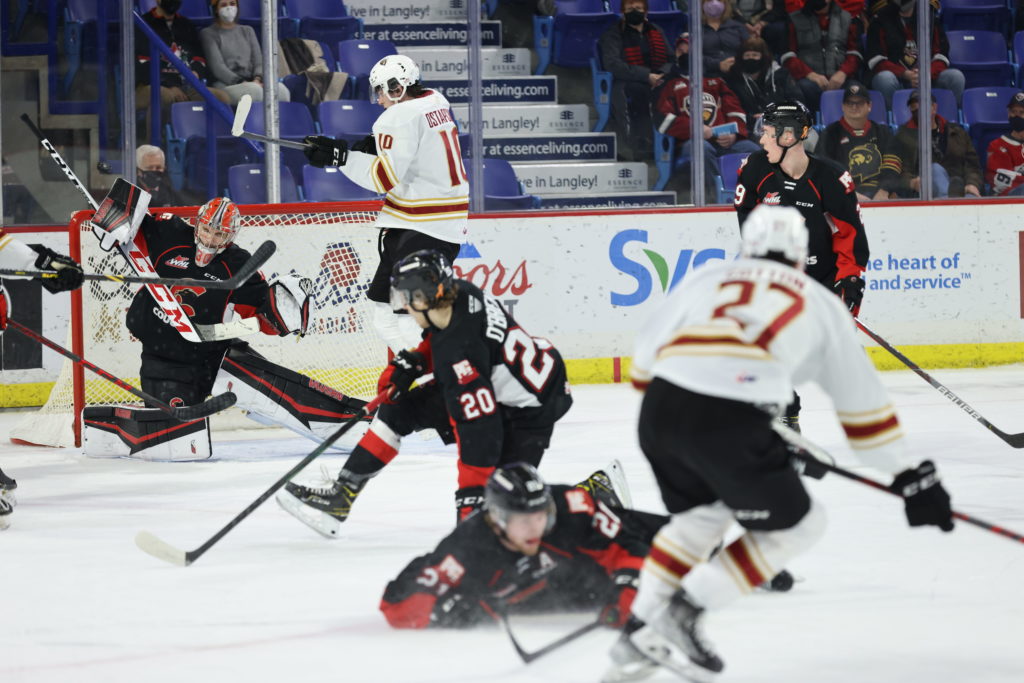 Saturday night at the Langley Events Centre the Vancouver Giants (15-17-2-0) dropped a 4-2 decision to the Prince George Cougars (15-17-1-1) in the back-half of a weekend double-header. Koehn Ziemmer led the way for Prince George with two goals while Connor Horning (1G, 1A) and Tanner Brown (2A) each had two points in response for the Giants who trailed the game 3-0, but stormed back to within a goal before time ultimately expired. Cougars netminder Tyler Brennan stopped 27 Giants shots while Jesper Vikman made 25 saves on the 28 Cougar shots fired his way.

PG – At 13:46 of the opening frame, Koehn Ziemmer took a feed off a faceoff victory, and snapped a low shot through a crowd and home. The lone helper came from Riley Heidt.

PG – 52 seconds later on a power play, Koehn Ziemmer struck again. This time he parked himself in the left-wing circle and one-timed a feed from Riley Heidt past the outreached stick of Jesper Vikman.

PG – Ethan Samson extended the Cougars lead to 3-0 with a power play marker at 9:20. Samson’s point shot made it’s way through traffic and home, and was set up by both Connor Bowie and Riley Heidt.

VAN – The Giants responded with a power play tally of their own at 13:35. Connor Horning parked himself in front of the Prince George goal and deflected a Tanner Brown point shot home for his seventh of the season. Jaden Lipinski also secured an assist on the opening goal of the evening for Vancouver.

VAN – Three minutes into the final frame, Justin Lies parked himself in the left-wing circle, and one-timed a Connor Horning cross-ice feed home for his sixth goal of the season, and his second in as many games. Tanner Brown earned the second assist.

PG – With 38 seconds to go in the game, Jonny Hooker ended all hopes of a Cougars comeback when he flung his ninth of the season into the empty net off a shot from center ice. Jonas Brøndberg had the lone assist.

Next Giants Game: A Friday road showdown with the Victoria Royals at 7:05 PM.