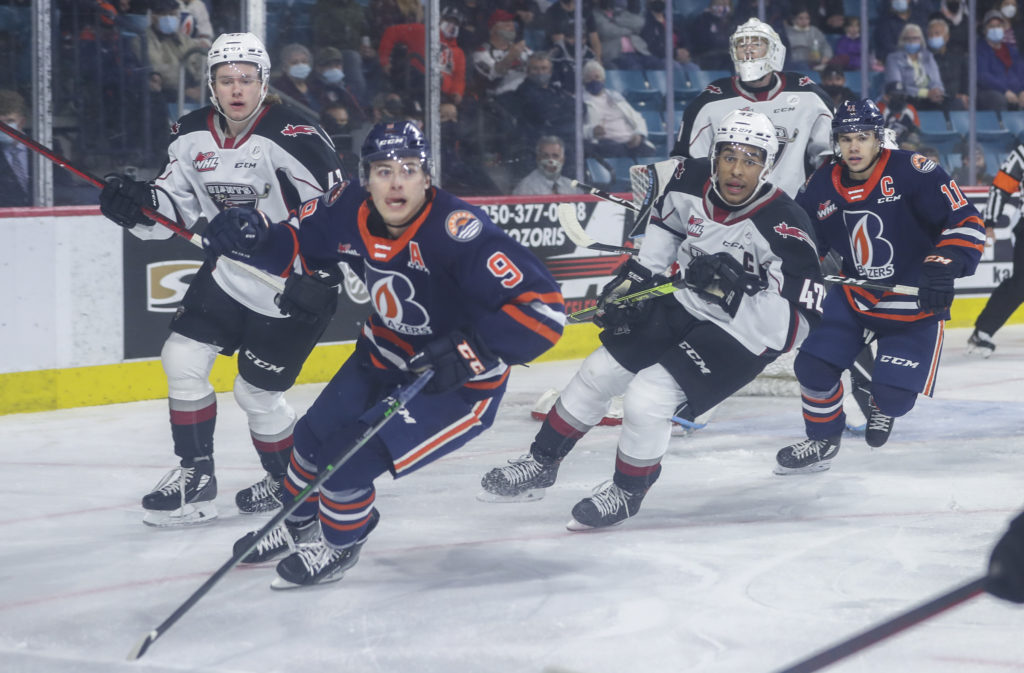 Friday night at the Sandman Centre in Kamloops, the Vancouver Giants (2-2) dropped a 7-4 decision to the B.C. Division leading Kamloops Blazers (6-1). Josh Pillar paced the Blazers attack with a goal and two assists while Logan Stankoven and Quinn Schmiemann each added two goals. Fabian Lysell (1G, 2A) responded with a three-point effort to lead all Giants. Adam Hall, Ty Thorpe and Nicco Camazzola also supplied goals for the Giants. Dylan Garand earned the win in goal for Kamloops with 25 saves. Will Gurski made 21 saves in his Vancouver Giants debut.

KAM – At 12:42 of the opening frame, Quinn Schmiemann notched his first of two goals on the evening for Kamloops on a power play. Schmiemann’s point shot from the left-wing was set up by Fraser Minten and Dylan Sydor.

KAM – 20 seconds later Marko Stacha (4) increased the Kamloops lead to 2-0 off a low shot from the left-wing circle. The lone helper came from Daylan Kuefler.

KAM – 28 seconds after that, Logan Stankoven (4) made it 3-0 Kamloops on a breakaway finish. Josh Pillar secured his first of three points on the night with an assist. It marked three goals in a span of 48 seconds for Kamloops.

VAN – 49 seconds into the period, Ty Thorpe put the Giants on the board when he backhanded home a Fabian Lysell rebound for his second goal of the season.

KAM – At 5:13, Josh Pillar restored the three-goal lead for Kamloops with an unassisted, highlight reel goal – His fourth of the season.

KAM – Quinn Schmiemann’s second goal of the night came off an odd-man rush at 8:05. Nick McCarry and Matthew Seminoff both earned the assists.

KAM – 1:13 into the third, Fraser Minten made it 6-1 Kamloops when his cross-crease pass deflected off a Giant and past Will Gurski. Connor Levis drew the helper on Minten’s fourth marker of the season.

VAN – Adam Hall kick-started the Giants comeback efforts at 2:55 when he batted home a Payton Mount rebound from just outside the Kamloops crease. Nicco Camazzola earned an assist on Hall’s team-leading fourth goal.

VAN – Then with 9:13 remaining, Fabian Lysell took a Justin Sourdif pass and snapped home his first career WHL goal off the rush from the right-wing circle to make the game 6-4, Mazden Leslie drew the second assist.

KAM – All hopes of a Giants comeback ended at 17:19 when Logan Stankoven potted his second of the night into an empty net off a breakaway. Josh Pillar set up the play, securing his third point of the game in the process.

Will Gurski: 21/27 saves for Vancouver

Next Giants Game: A Saturday home showdown with the Kelowna Rockets tomorrow at 7:00 PM.