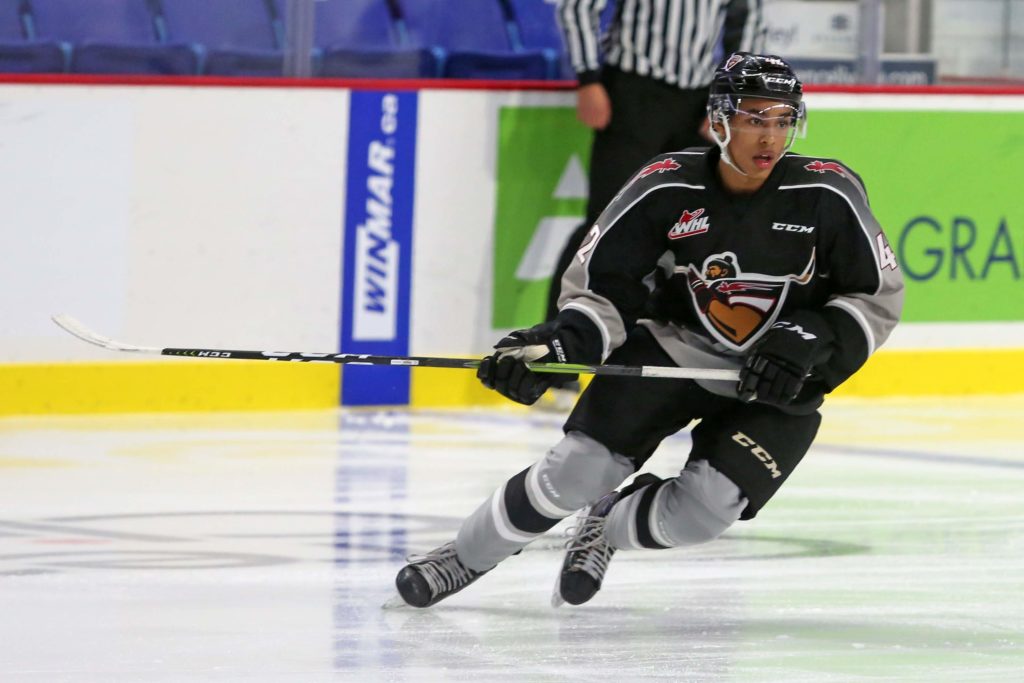 Wednesday night in Medicine Hat the Vancouver Giants (23-11-2-0) dropped a 4-3 decision to the Medicine Hat Tigers (21-15-2-1). Tigers captain James Hamblin led the Tigers with two goals and an assist. Bowen Byram had two assists in response for the Giants who received goals from Davis Koch, Justin Sourdif and Lukas Svejkovsky. Jordan Hollett earned the win in goal for the Tigers turning aside 29 of Vancouver’s 32 shots while David Tendeck stopped 32 of 36 fired from the Medicine Hat Tigers.

With the game still scoreless, Giants goaltender David Tendeck made a sensational lunging glove save off Daniel Baker to keep the game tied. Moments later though the Tigers made it 1-0 when James Hamblin potted his first of two on the night off an odd-man rush. Hamblin’s goal came at 15:13. Shots were 15-6 for the Tigers in the opening period.

A pair of goals 22 seconds apart helped vault the Giants ahead of the Tigers in the early stages of the second period. Davis Koch one-timed a Bowen Byram feed past Jordan Hollett at 1:07 to tie the game. Then Justin Sourdif roofed his eight of the season up and over the shoulder of Hollett at 1:29 to give the Giants the 2-1. Later in the period though, the Tigers struck twice in quick succession as well. Off a defensive zone turnover, James Hamblin skated in close before roofing his 23rd of the season over the left shoulder of David Tendeck off a backhand shot. 33 seconds later Elijah Brown one-timed a Dylan MacPherson pass from the left-wing point into an open net to help Medicine Hat regain the lead. Shots were 16-14 for the Tigers who led 3-2 after 40 minutes.

Hayden Ostir gave the Tigers a two-goal lead at 8:48 on a power play when he parked himself in front of the Giants net and deflected James Hamblin’s shot home for his eighth. Less than three minutes later Lukas Svejkovsky answered for the Giants with his third of the season which came off a Dylan Plouffe rebound. With under two minutes to go the Giants pulled their goaltender and put a lot of pressure on the Medicine Hat goal, but were unable to complete the comeback despite outshooting the Tigers 13-5 in the final period.

Next Giants Game: Friday in Lethbridge against the Hurricanes at 6 PM PT.