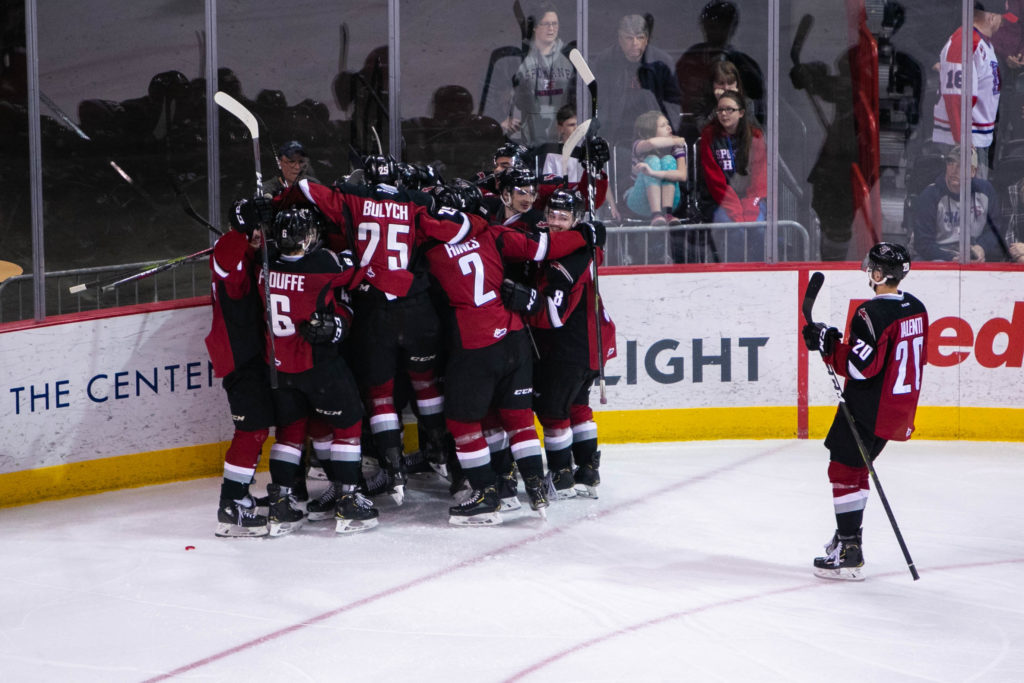 The Vancouver Giants are one win away from the Western Hockey League Championship series. Wednesday night in Spokane, WA the Giants earned a 4-3 come-from-behind overtime victory over the Spokane Chiefs. Dawson Holt, the WHL’s reigning Player of the Week ripped home his fifth of the playoffs at 7:07 of the first overtime, giving the Giants a 3-1 series lead. Jadon Joseph, Bowen Byram and Brayden Watts supplied the other goals for Vancouver while David Tendeck made 28 saves in goal. Adam Beckman had two goals in response for Spokane.

SPO – Adam Beckman (7) opened the scoring for the Chiefs at the 18:38 mark of the first period. His first of two goals on the night was assisted by Nolan Reid and Jaret Anderson-Dolan.

SPO – Adam Beckman wasn’t done. He notched his second of the game and eighth of the playoffs at 10:06 of the second period off a slick backhand shot that snuck past the blocker of David Tendeck. Ethan McIndoe had the lone helper on the play.

VAN – 4:26 into the third period the Giants got on the board when Jadon Joseph (7) parked himself in front of the Spokane goal and knocked a Tristen Nielsen rebound home. Davis Koch also assisted on the Giants opening marker of the game which came on a delayed Spokane penalty.

VAN – Bowen Byram (6) tied the game at 9:11 when his shot from the left-wing point on a Giants power play snuck through traffic and home. Milos Roman and Davis Koch earned assists.

VAN – 53 seconds later the Giants took the lead when Brayden Watts’ shot from the left-wingle circle ripped past Bailey Brkin. Watts’ fourth of the playoffs was assisted by Justin Sourdif and Milos Roman.

SPO – The Chiefs answered at 16:25 of the third when Riley Woods (7) banked a shot off a defender and across the line from the right side of the net.

VAN – Dawson Holt (5) ended the game at 7:07 of overtime when his shot from the right-wing circle off the rush beat Brkin blocker side .Holt’s OT winner was set up by Alex Kannok Leipert and Bowen Byram.

Spokane: 0/1 on the Power Play

Next Game: Friday night at 7:30 PM at the Langley Events Centre. A win for the Giants and they’ll advance to the Western Hockey League’s championship series.