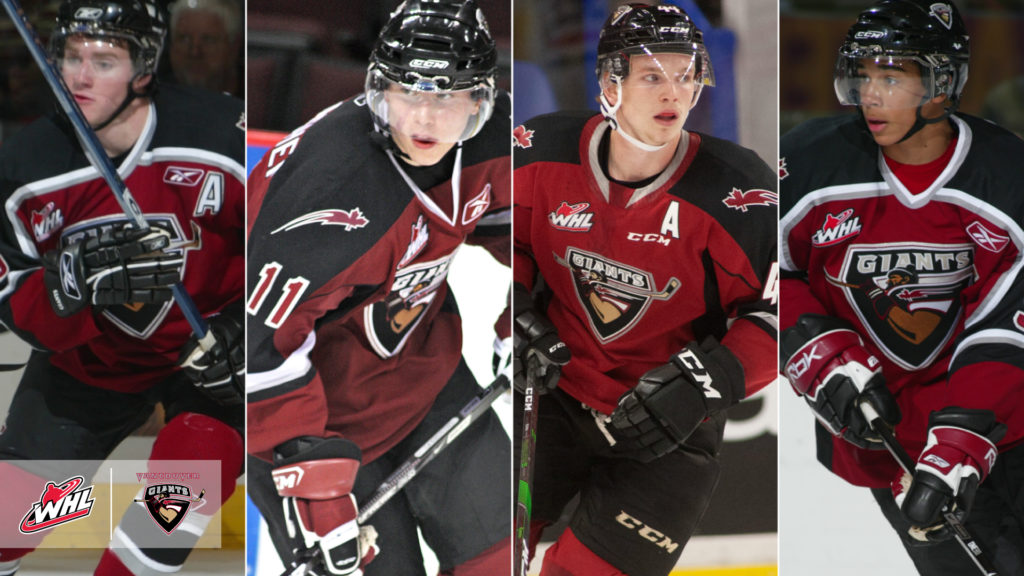 The Western Hockey League will be represented by six players from five WHL member Clubs on Canada’s National Junior Team at the 2020 IIHF World Junior Championship. In the lead up to the start of the tournament on Thursday, December 26 in the Czech Republic, the WHL will be taking a look through the lens of those five teams and some of their past contributions to Canadian entries at the tournament. Today’s profile focuses on the B.C. Division’s Vancouver Giants.

Despite just beginning play near the start of the millennium, the Vancouver Giants have already cultivated a strong tradition of success within the WHL as well as on the international stage. That tradition continues this year with defenceman Bowen Byram joining Canada’s roster for the 2020 IIHF World Junior Championship.

No stranger to the international stage, the 18-year-old from Cranbrook, B.C. was the third-overall selection at the 2016 WHL Bantam Draft and subsequently chosen fourth overall by the Colorado Avalanche at the 2019 NHL Draft. As part of last year’s regular season run with the Giants to capturing the top spot in the B.C. Division, Byram led all CHL defencemen with 26 goals and finished the year with 71 points (26G-45A) as part of a historically-dominant season. He also set a WHL record, scoring six of his nine game-winning goals in overtime.

In the 2019 WHL Playoffs, Byram set another record by becoming the first defenceman in WHL history to lead a single playoffs in scoring, posting 26 points (8G-18A) in 22 games as the Giants made it to Game 7 of the 2019 Rogers WHL Championship Series. Overall, Byram has totalled 117 points (35G-82A) in 165 WHL regular season games, including 11 power-play goals, one short-handed goal, and 11 game-winning goals.

The tournament will also add to Byram’s international experience, which has already featured a silver medal at the 2017 World Under-17 Hockey Challenge, a gold medal at the 2018 Hlinka Gretzky Cup, and an appearance at the 2018 IIHF Under-18 World Championship.

1. A year after being crowned as a WHL Champion, Cody Franson answered Hockey Canada’s call to play for them at the tournament in Leksand and Mora, Sweden.

The 2007 edition of the tournament saw Canada take aim for the 13th title at the event while also looking for the three-peat as well. Recording a pair of assists at the event, Franson aided Canada on both the offensive and defensive sides of the puck.

Winning gold was part of another special year for Franson and the Giants as they later claimed the Memorial Cup on home ice.

2. Also joining Franson at that year’s tournament was Kenndal McArdle, who had come over in a trade from the Moose Jaw Warriors that season.

While he was held pointless through six games, McArdle still brought a strong presence to Canada’s roster with his 6-foot-0, 203-pound frame.

His offensive skills were well exhibited for the Giants as he posted 20 points (11G-9A) in 22 games during the 2007 WHL Playoffs, then added four points (2G-2A) in five games as the Giants hosted and won that year’s edition of Memorial Cup.

3. Winning a Memorial Cup in 2007 with the Giants, Evander Kane’s chance to play for Canada at the World Juniors came during the 2008-09 season when he represented the Giants at the tournament in Ottawa, Ont.

On a stacked Canadian squad, Kane thrived offensively with six points (2G-4A) in six games as Canada won their fifth-consecutive goal medal at the tournament.

4. When the World Juniors came to Alberta in 2012, a pair of Vancouver Giants helped lead Canada’s entry to the tournament. On the ice, Brendan Gallagher was one of several WHL players to find success, posting six points (3G-3A) through six games at the tournament, though Canada would ultimately settle for the bronze medal.

The season was still a positive one for Gallagher, who would be named to the Western Conference All-Star Team for a second-consecutive season later in 2012.

5. The second member of the Giants on Canada’s squad in 2012 was the legendary Don Hay. Throughout his coaching career, Hay has twice had the chance to coach Canada’s National Junior Team, earning a medal both times in the province of Alberta.

As coach of the Kamloops Blazers in the early 1990s, Hay had his first opportunity at the 1995 World Juniors, coaching Canada to a perfect 7-0-0-0 record where they outscored their opponents 49-22. His next opportunity came in 2012 as the tournament returned to Alberta. Heading up the Giants’ coaching staff at the time, he helped Canada earn another podium spot by collecting the aforementioned bronze medal.