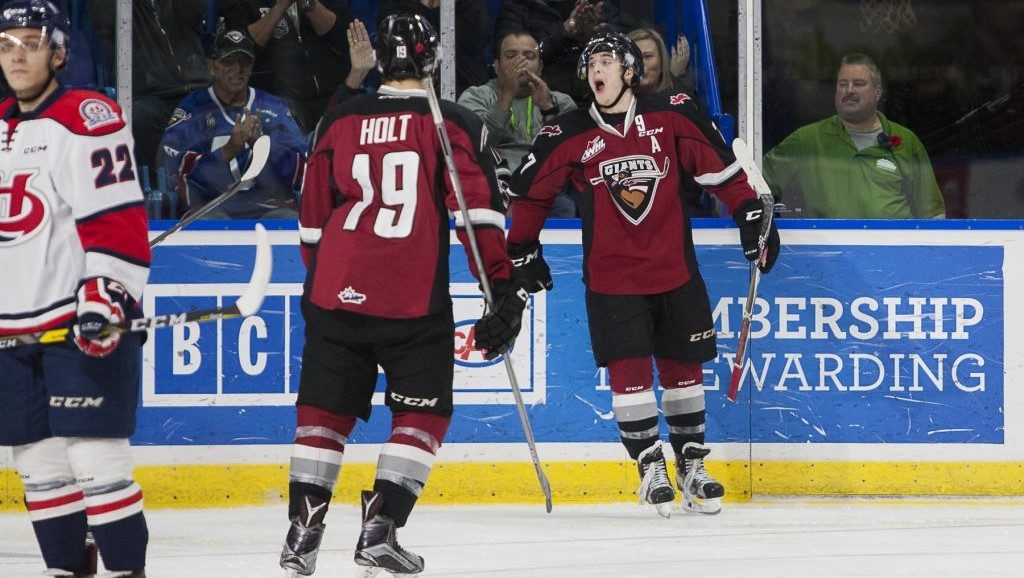 The Vancouver Giants got two-goal efforts from Radovan Bondra and Ty Ronning en route to a 7-3 win over the Lethbridge Hurricanes on Saturday night at the Langley Events Centre. Tyler Benson, Jack Flaman and Thomas Foster also had goals for the G-Men in the victory. David Tendeck made 19 saves for the first win of his WHL career.

The teams traded goals in the first period with Giorgio Estephan drawing first blood for Lethbridge before Flaman equalized for Vancouver, scoring his eighth of the season on a rebound off the end wall.

Benson gave the Giants their first lead of the night at 6:32 of the second period, beating Hurricanes net minder Ryan Gilchrist on a power play. Brayden Burke made it 2-2 with a goal on a Lethbridge man advantage, but the Giants rattled off four unanswered goals to take control of the game. Bondra scored on a sharp-angle shot from the right wing before Ronning hammered home a rebound to put Vancouver ahead 4-2 after 40 minutes.

Ronning scored again on another rebound early in the third period, and Bondra was setup beautifully by James Malm on a Vancouver power play for his second goal of the evening. Former Giant Brennan Menell cut into the lead with a PP goal of his own later in the period, but Foster responded quickly for Vancouver, deflecting a Darian Skeoch point shot past Gilchrist.

The Giants set a season-high for goals in a game and margin of victory. Vancouver went 2-for-3 on the power play and out shot the Hurricanes 32-22.

Ronning’s second marker was the Insurance Goal of the Game.

The G-Men return to action on Thursday at the Langley Events Centre for White Spot Legends Night when they host the Prince George Cougars. Vancouver will honour late co-owner Pat Quinn ahead of his induction into the Hockey Hall of Fame. For tickets, click here or call 604.4.GIANTS (604.444.2687).