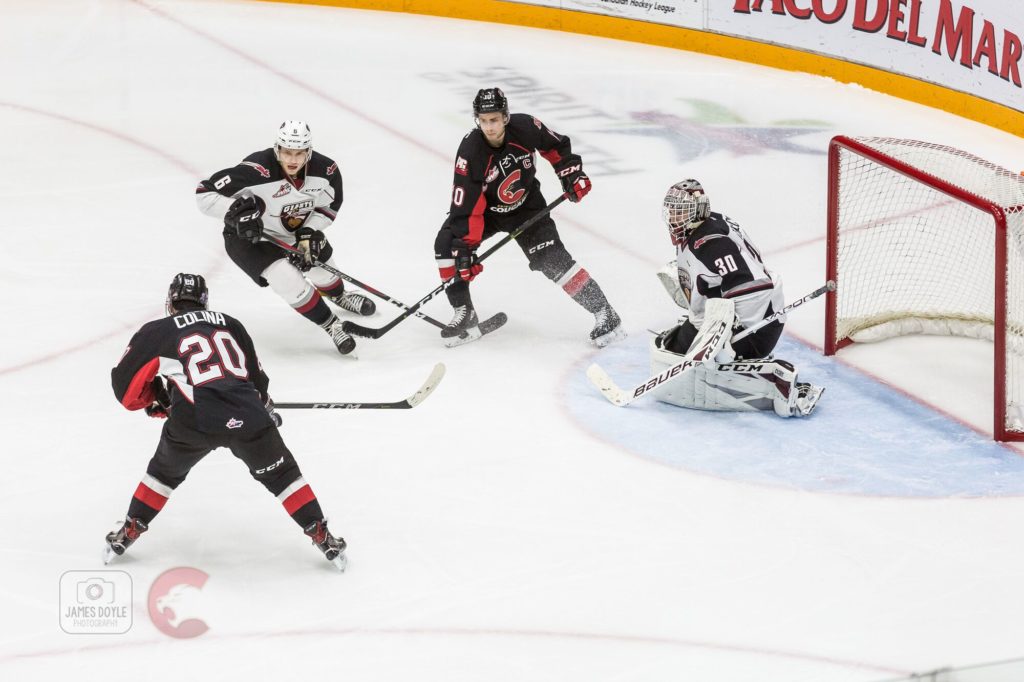 The Vancouver Giants improved their road record to 3-0 and their season record to 5-1 Friday with a 3-0 victory over the Prince George Cougars at the CN Centre. Owen Hardy, Justin Sourdif and Lukas Svejkovsky all scored in a 3:53 span of the third period to help secure the victory for the Giants. David Tendeck was solid in goal stopping all 24 shots fired his way to earn his fourth career WHL shutout. For a third time in four starts, Tendeck was named the game’s first star. Taylor Gauthier stopped 22 of the 25 shots at the other side for the Cougars who are now 2-3-0-1.

The first 40 minutes of the game yielded no scoring. In the first period the Giants outshot the Cougars 10-5, but couldn’t muster much in the way of quality chances.

Momentum favored the Cougars in period two as they outshot the Giants 13-5. David Tendeck made a terrific save off a Josh Maser redirection in the final minute of the middle frame to keep the score knotted at 0-0.

Early in the third period the Cougars had a two-on-one rush thwarted by a diving defensive block from newly acquired defenceman Ty Ettinger. Seconds later the Giants grabbed the game’s first goal when Owen Hardy’s shot from the left-wing circle found its way past the left arm of Taylor Gauthier. Hardy’s second goal of the season was assisted by James Malm who extended his point-streak to four games.

Two minutes and 13 seconds later rookie Justin Sourdif extended the Giants lead when he crashed the net and banged home a Milos Roman rebound from in close. Then a minute and 40 seconds later the Giants added some insurance when Lukas Svejkovsky notched his first career WHL goal off an unassisted power play marker.

From there, the Giants held on to secure the 3-0 victory and improved their record overall record to 5-1 through six games. Vancouver’s power play went one-for-three and the penalty kill was two-for-two.

The two teams will meet again tomorrow night at 7:00 PM as the Giants look to secure a sweep of their three-game road trip through the B.C. Division.