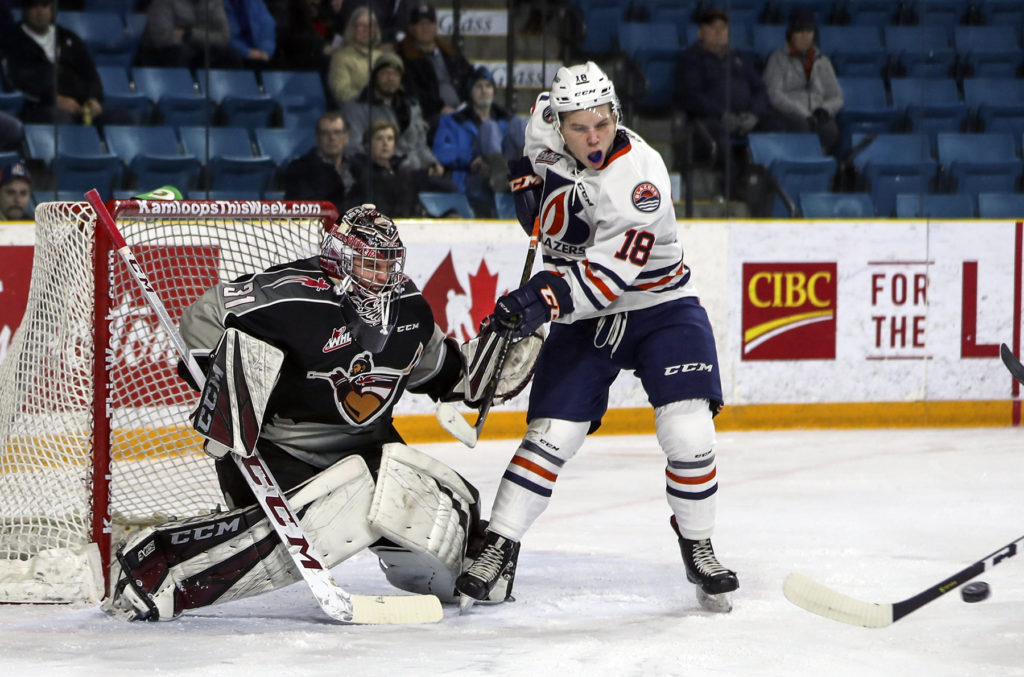 With five games remaining in their regular season, the Vancouver Giants are once again tied for first place in the Western Conference standings. Wednesday night in Kamloops the Giants (45-14-2-2) skated to a 5-0 victory over the Kamloops Blazers (23-32-5-2). Justin Sourdif and Bowen Byram each recorded franchise milestones thanks to their third period goals. Sourdif became just the third Giant to reach the 20-goal mark during his 16-year-old season, while Bowen Byram set a new single season record for goals by a Giants defencemen when he notched his 25th. Five different Giants recorded multi-point games as they finished 8-0 for the season against Kamloops.

VAN – Jadon Joseph (19) put the Giants ahead 1-0 when he converted off a wrap-around just 34 seconds into the second period. Lukas Svejkovsky and Tristen Nielsen earned assists.

*Kamloops Blazers goaltender Dylan Ferguson left the game at 1:37 of the second period with a lower body injury and was replaced by Dylan Garand.

VAN – Davis Koch made it 2-0 on a power play at 3:15 when his shot from the left-wing circle beat Garand to the stick side. Bowen Byram and Dylan Plouffe assisted on the play.

VAN – Justin Sourdif (20) increased the Giants lead to 3-0 at 9:45 when he one-timed home a Davis Koch feed from the slot. With that goal, Sourdif became just the third Giant in the history of the franchise to surpass the 20-goal mark in his 16-year-old season.

VAN – Bowen Byram (25) notched his franchise milestone at 13:03 when his shot from the right-wing circle ripped past Dylan Garand. With his goal, Byram surpassed Kevin Connauton to become the Vancouver Giants single season goal-scoring leader for a defenceman. Dylan Plouffe and Milos Roman assisted on the historic marker.

We got ourselves a New Leader in Goals by a Defenceman. Congratulations @BowenByram on your 25th Goal of the Season! #NHLDraft pic.twitter.com/Ge0JWfMEFD

VAN – Jadon Joseph rounded out the game’s scoring for the Giants when he knocked home his 20th of the season off a Jared Dmytriw rebound at 16:47. Joseph’s goal also came via the power play.

Vancouver: 3/5 on the Power Play

Kamloops: 0/5 on the Power Play

Next Giants Game: A road battle with Spokane on Friday night at 7:05 PM.