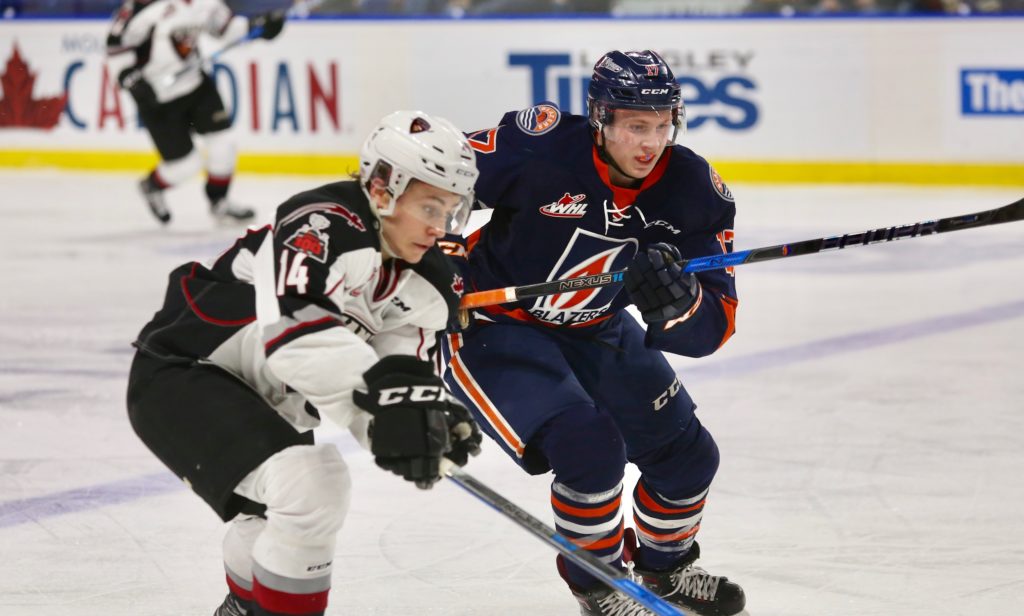 Monday night at the Langley Events Centre the Vancouver Giants earned a hard fought 2-0 victory over the visiting Kamloops Blazers. Jared Dmytriw’s power play goal at 13:50 of the second period stood as the game winner and Tyler Benson added some insurance at 19:59 of the third into an empty net. David Tendeck turned aside all 24 shots fired his way to earn his 23rd victory of the season, and his third shutout. Dylan Ferguson stopped 24 of the 25 shots fired his way in response for Kamloops.

Despite not facing each other since November 17th, it didn’t take long to rekindle the rivalry between these two B.C. Division foes. The first period was fast, physical and had no shortage of scrums after whistles. David Tendeck faced 10 shots and stopped them all while Dylan Ferguson went 11-for-11 for Kamloops.

Period two featured more of the same as neither goaltender relented. The Giants did a terrific job in front of Tendeck blocking shots and not allowing the Blazers to use their size to their advantage. Meanwhile the Blazers held their ground too, but got into some second period penalty trouble that eventually costed them.

With time winding down in the period and the Giants on their fourth unanswered power play, Jared Dmytriw put the home side on the board when he slid home his 14th of the season off a low shot from the left circle. That goal stood as the only one through 40 minutes and the Giants took a 1-0 lead into the final frame.

Kamloops outshot the Giants 11-7 in the final period but David Tendeck and his teammates dug their heels in and did not surrender a tying goal. His best save came off a Luc Smith wrap-around chance in the later stages of the third when he dove to his right and stopped his forehand chance with his glove.

Giants captain Tyler Benson ended all hopes of a Kamloops comeback when he potted his 21st of the season into an empty-net, one second before time had expired in the third. The final shots were 26-24 for the Giants who snapped a three-game losing streak with their 32nd victory of the season. The Giants are now 3-2 in their season series with Kamloops and are 2-1 against them at the LEC. The G-Men went one-for-four on the power play and went the entire 60 minutes without a single minor penalty.

With the win the Giants record now sits at 32-21-5-3. Their 72 points puts them three shy of Victoria for second in the B.C. Division and they now lead the fourth placed Blazers by 13. The Giants hold two games in hand on Victoria and could inch even closer to second place tomorrow when they take the ice in Seattle against the Thunderbirds at 7:00 PM.