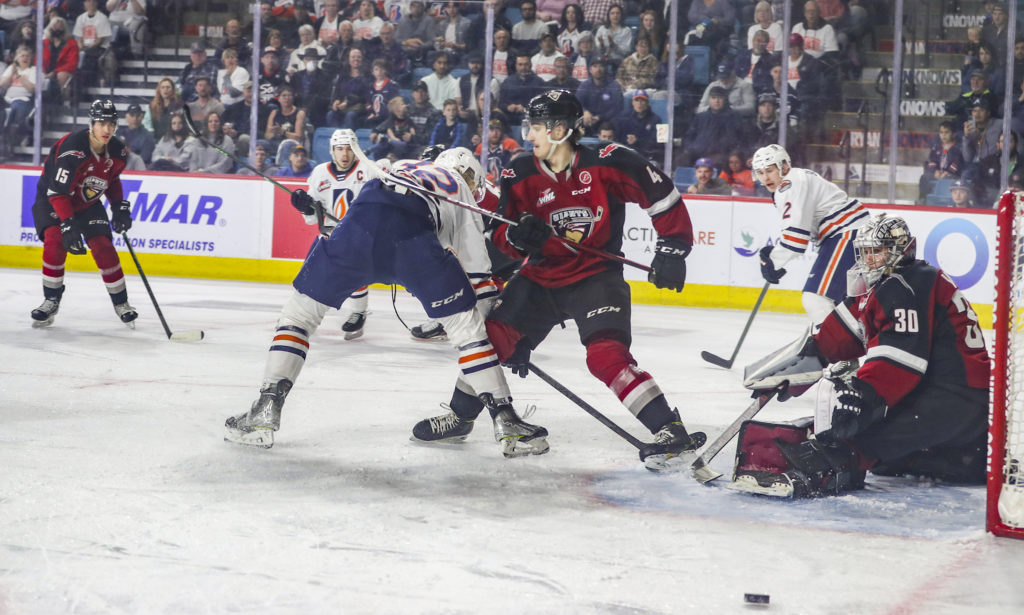 There is no quit in the 2022 playoff version of the Vancouver Giants. Friday night at the Sandman Centre in Kamloops, the Vancouver Giants erased a 2-1 third period deficit with four unanswered goals and kept their season alive in the process. Zack Ostapchuk had two goals and two assists for the Giants in a 5-2 victory over the Kamloops Blazers in Game 5. Adam Hall added three points (2G, 1A) and Jesper Vikman turned aside 35 Kamloops shots to earn the victory. Matthew Seminoff and Luke Toporowski responded with goals for Kamloops.

GIANTS FORCE A GAME 6 AFTER A 5-2 WIN FRIDAY

KAM – 4:27 into the opening period, Luke Toporowski scored off a two-on-one rush with Logan Stanoven.

VAN – The Giants responded at 9:09 when Adam Hall (9) finished off a wrap around that was set up by Zack Ostapchuk.

KAM – The Blazers took their second lead of the game at 10:43 of the middle frame when Matthew Seminoff (3) pounced on a centering feed and snuck a low shot past Jesper Vikman’s left pad. Fraser Minten and Viktor Persson both helped set up the play.

VAN – Just 1:33 into the third period the Vancouver Giants tied the score once again when Ty Thorpe swatted home a Tom Cadieux rebound off a point shot. Cole Shepard collected the second assist on Thorpe’s third of the playoffs.

VAN – 59 seconds later the Giants made it 3-2 when Zack Ostapchuk finished off a centering feed from Evan Toth off the left wing. Fabian Lysell drew the second assist on Ostapchuk’s sixth of the playoffs.

VAN – With 18:22 gone in the third, Adam Hall (10) extended the lead to 4-2 when he scored into an empty net on a power play. For the Giants it was only their second power play of the game and it came off a too-many-men penalty for Kamloops that came late in regulation.

VAN – Zack Ostapchuk (7) ended all hopes of a Kamloops comeback at 18:38 when he also scored into an empty net off a shot from center. Fabian Lysell and Adam Hall both assisted.