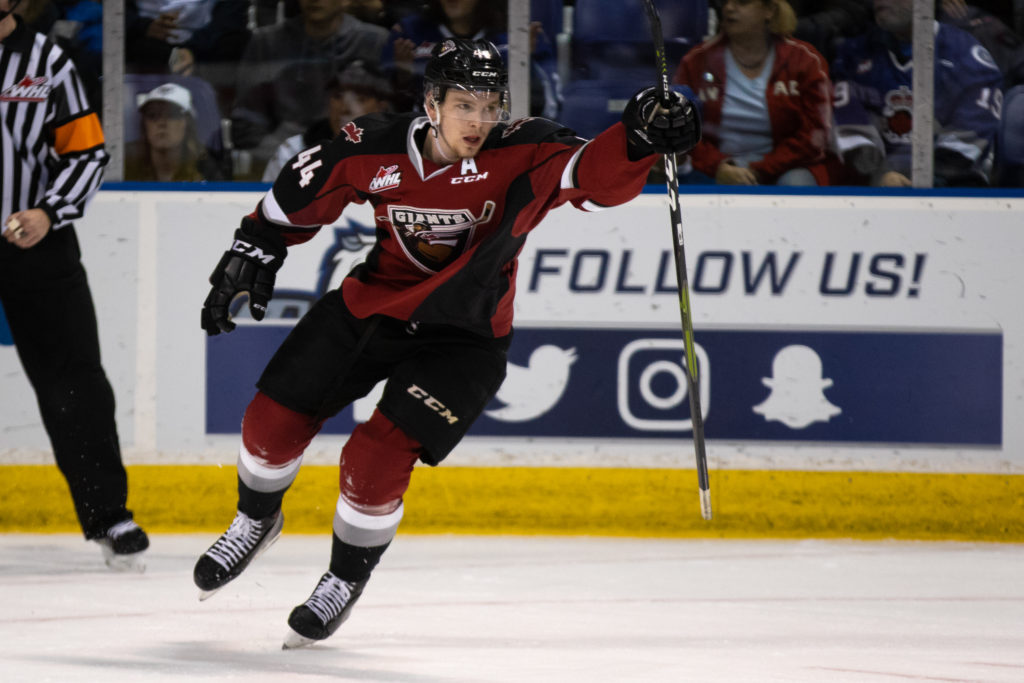 The Vancouver Giants are off to the WHL’s Western Conference final! Thursday night in Victoria the Giants completed a series sweep of the Victoria Royals thanks to a 6-1 victory. Captain Jared Dmytriw led the Giants with a goal and two assists while Bowen Byram, Lukas Svejkovsky, Owen Hardy and Dallas Hines also registered goals. David Tendeck stopped 17 of the 18 shots fired his way in the Giants net. D-Jay Jerome had the lone goal for the Royals while Griffen Outhouse stopped 27 shots for Victoria in his final WHL game.

VAN – Lukas Svejkovsky (3) got the Giants offense started at 10:04 when he deflected a Seth Bafaro point shot past Griffen Outhouse. Davis Koch also assisted on the play.

VAN – Bowen Byram (4) then got in on the act at 16:19 when he ripped a shot under the arm of Griffen Outhouse and home from the right-wing circle. Brayden Watts and Justin Sourdif earned assists on the eventual game-winning goal.

VAN – 18 seconds later Dallas Hines extended the Giants lead to 3-0 when he potted his third goal of the playoffs. Jadon Joseph and Milos Roman drew the assists.

VAN – Owen Hardy (3) extended Vancouver’s lead to 4-0 at 9:39 off the rush when he re-directed home a Jared Dmytriw feed from the left-wing. Dawson Holt notched the second assist.

VIC – D-Jay Jerome recorded the lone goal of the game for Victoria at 11:58. His second goal of the series came courtesy of Logan Doust and Jameson Murray.

VAN – Brayden Watts made it 5-0 Vancouver at 8:03 when his shot from the high-slot had just enough zip on it to cross the goal line. Jared Dmytriw recorded the lone assist on the play to notch his second point on the night.

VAN – Jared Dmytriw capped off a terrific series with a goal at 12:47 on a power play. His fourth goal of the playoffs was assisted by both Tristen Nielsen and Lukas Svejkovsky.

Victoria: 0/1 on the Power Play

GET TICKETS FOR GAME 1 HERE

GET TICKETS FOR GAME 2 HERE