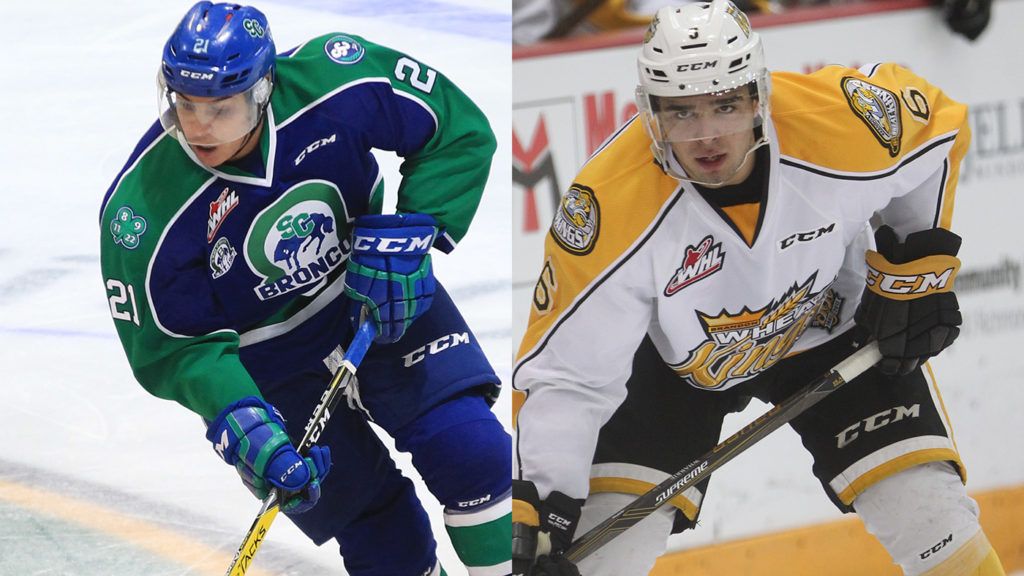 The Vancouver Giants announced a pair of trades on Tuesday. The deals were made prior to the Western Hockey League trade deadline. The Giants have acquired 1997-born defenceman Jordan Wharrie and a second round pick in the 2019 WHL Bantam Draft from the Brandon Wheat Kings for 1996-born import blue liner Dmitry Osipov. The G-Men also sent a conditional ninth round pick in the 2017 Bantam Draft to the Swift Current Broncos in exchange for 1996-born forward Calvin Spencer.

“Dmitry exemplifies what a Vancouver Giant is. He’s been a warrior and done everything we’ve asked of him both on and off the ice. We’ve watched him grow as a person and gain command of the English language, and we wish him continued success for the rest of this year and in the future,” said General Manager Glen Hanlon. “With these moves, we bring some experience into our lineup in Jordan and Calvin. Our approach to the last week was to bring in young talent. Of course, whenever you do that, you have to pay a price, and these last two trades will help us bring some balance between youth and experience back to our current roster.”

Wharrie, a Port Moody native, has three goals and seven assists in 41 games with the Wheat Kings this season. The 19-year-old rearguard is also a former Victoria Royal and Everett Silvertip, amassing 132 career WHL games. He was a fifth round pick of the Silvertips in the 2012 WHL Bantam Draft.

Spencer has scored 10 goals and six assists in 36 games with the Broncos this season. The 20-year-old winger has played in 200 WHL games, split between Swift Current and the Seattle Thunderbirds. Spencer is the half brother of Dustin Byfuglien of the Winnipeg Jets.

Osipov was drafted by the Giants with the first overall pick in the 2013 CHL Import Draft and went on to play 239 games in a Vancouver uniform – more than any other import player in the club’s history. The hulking Russian blue liner has 11 points in 42 games this season.