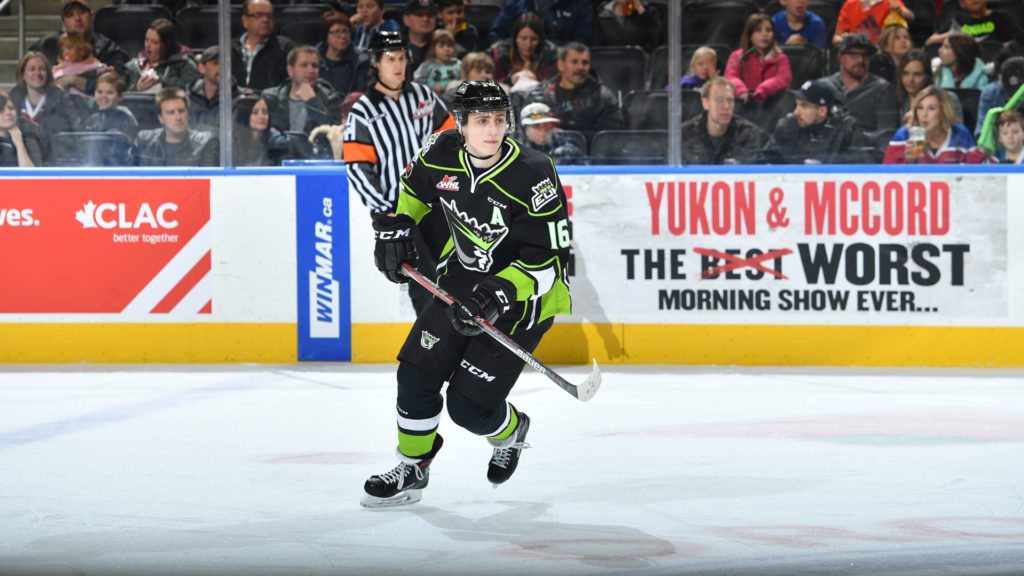 Originally selected by the Edmonton Oil Kings in the second round (42nd overall) in the 2013 WHL Bantam Draft, Koch (6’0”, 165 pounds) has suited up in 225 career WHL regular season games, all with the Oil Kings. During that span he has produced 59 goals, 99 assists (158 points) along with 34 penalty minutes. In 40 games this season with the Oil Kings he recorded 18 goals along with 21 assists for 39 points. His best WHL season (so far) took place in 2016-17 where he notched 21 goals and 49 assists for 70 points in 72 games played, which led his team in scoring. Koch, who was named an alternate captain of the Oil Kings at the start of the 2017-18 season, also has 11 games of WHL playoff experience on his resume.

“Davis Koch is a dynamic player, a game-changer, and a proven scorer in the WHL and his leadership and experience will be a welcomed addition to our organization,” said Giants General Manager, Glen Hanlon. “Heading into the trade deadline we made it our goal to add as much character, leadership and experience as possible, and Davis Koch checks all of those boxes for us. He’s very excited about returning to the Lower Mainland and playing hockey in front of friends and family on a nightly basis.”

Brendan Semchuk was drafted by the Giants 10th overall in the 2014 WHL Bantam Draft. The product of Kamloops, B.C. has registered 17 goals and 24 assists for 41 career points in 127 games spanning the last three seasons with the Giants.

Todd Scott was a 10th-round pick of the Giants in the 2015 WHL Bantam Draft. He compiled a record of 8-7-3-1 in 20 appearances with the Giants in 2017-18. He’s appeared on the two most-recent NHL Central Scouting ‘Players to Watch’ lists.

Glen Hanlon adds, “We want to thank Brendan and Todd for their contributions to our hockey club. We wish them the very best as they continue their hockey careers with a first-class organization like the Edmonton Oil Kings.”

The WHL Trade Deadline is at 2:00 PM local time today.

Tonight the Vancouver Giants return to action when they wrap up a five-game, 10-day road trip in Prince George against the Cougars. Puck drops at 7:00 PM from CN Centre.