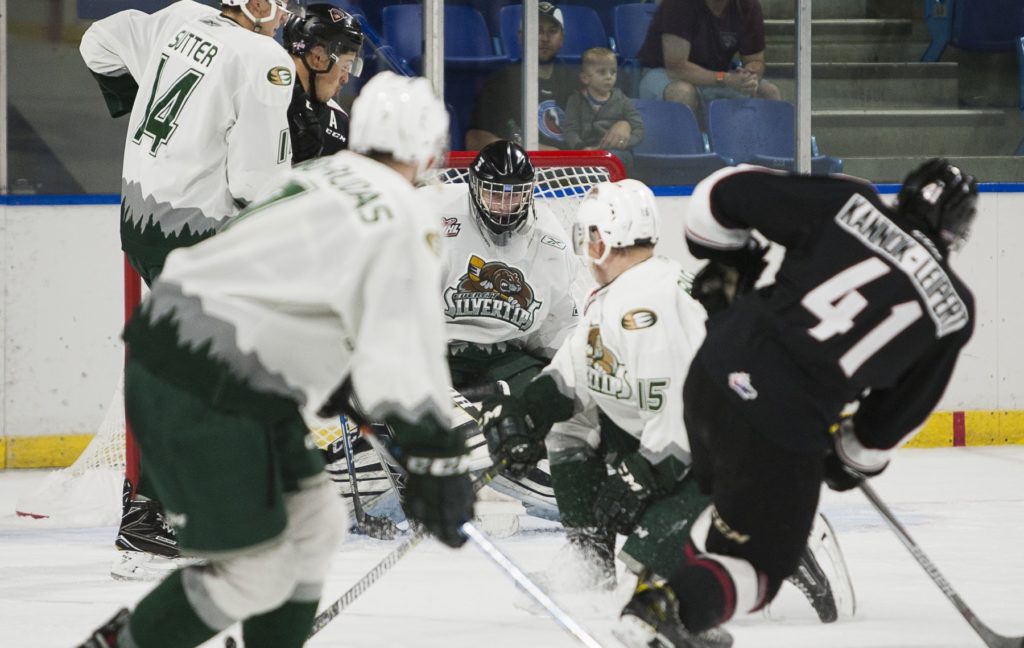 For a second straight game a young defenceman played the role of hero for the Vancouver Giants in a dramatic preseason victory. Sunday night in Langley the Giants erased a 4-2 third period deficit and stunned the Everett Silvertips with a 5-4 victory. Aidan Barfoot tied the game at 15:47 of the third and Alex Kannok Leipert struck with 7.3 seconds left on the clock to secure the Giants fourth straight victory in the preseason and their fifth overall. Orrin Centazzo responded with three goals for Everett while his linemate Martin Fasko-Rudas had a goal and three assists.

Giants starter Todd Scott came up big early denying Martin Fasko-Rudas on a breakaway. That save was his biggest of the seven he made in period one. Scott would end up playing the entire game for Vancouver and finished with 34 saves on 38 shots faced. He finished the preseason with a 3-0 record.

Each team would score once in the opening frame. Martin Fasko-Rudas opened the scoring for Everett at the 10:45 mark when his shot from the left circle snuck past Scott. But the Giants countered at 18:43 when Austin King-Cunningham’s quick low shot from the left circle handcuffed Everett starter Danton Belluk. For King-Cunningham it was his first of the preseason and was assisted by Jack Flaman. Shots were 9-8 after one favoring Vancouver.

31 seconds into the second period Orrin Centazzo knocked home a rebound from in close to get Everett back on top. But just over three minutes Owen Hardy responded for the G-Men with his third of the preseason which came off a deflection right as an Everett power play had expired. Milos Roman and Dylan Plouffe assisted.

Everett grabbed their third lead of the game at 7:14 and again it was Centazzo. This time he parked himself close to the net and one-timed home a Fasko-Rudas pass from behind the Giants goal for his second of the period. That helper from Fasko-Rudas was his third point of the evening.

Shots were 27-19 favoring Everett after two.

Centazzo completed his hat-trick 31 seconds into the third period off a backhand deke in close. Fasko-Rudas notched his fourth point of the game with an assist on the play.

Jason McKee’s crew didn’t quit though. James Malm started the comeback bid at 8:19 of the third when he out waited everybody before snapping home his fourth of the preseason. Then at 15:47 rookie Aidan Barfoot found an opening in front of the Everett net and one-timed home a pass from Alex Kannok Leipert to even the game at four.

The final dagger came with just seven seconds remaining in the third. Milos Roman dashed down the left wing, and then slid a perfect pass to defenceman Alex Kannok Leipert trailing the rush. From there the rookie defenceman took one stride and wired a shot through traffic and home for his first of the preseason. That dramatic goal would stand as the winner as the Giants captured their fourth straight victory and their fifth victory in six preseason outings.

Final shots were 38-28 for Everett. Neither team mustered a power play goal as the Giants went zero-for-six and the Silvertips were zero-for-two.

The Giants wrap up their preseason with a 5-1 record overall. They’ll kick off the regular season on Friday, September 22nd in Victoria against the Royals.