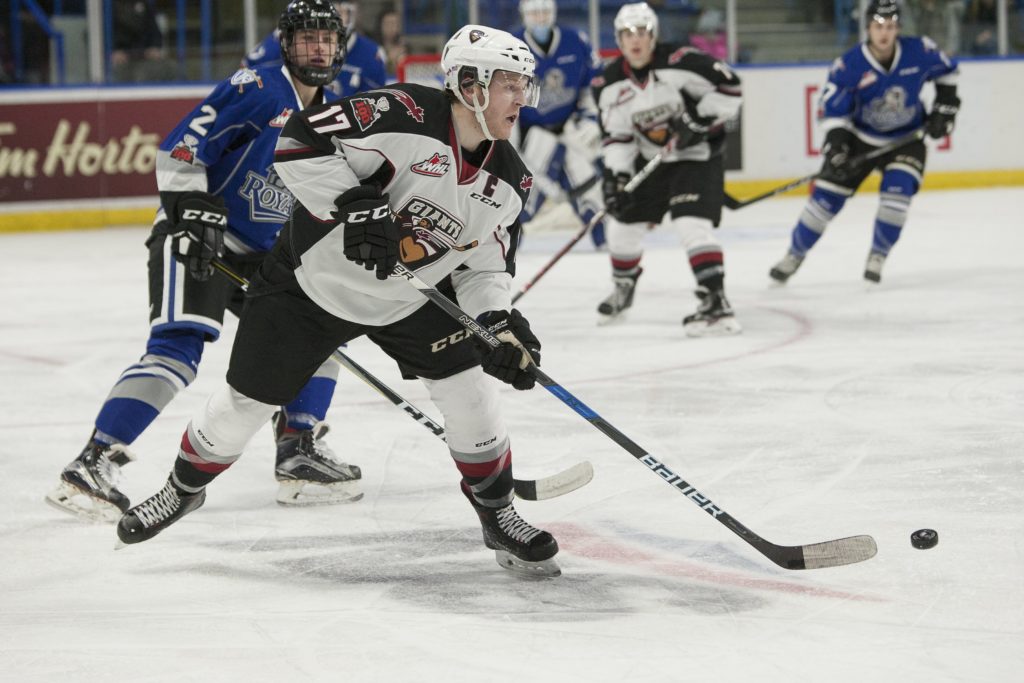 The long awaited NHL debut for Tyler Benson has arrived.

"Now that the time has come to be able to wear the jersey in a game, it's going to be special."

Benson on suiting up for his long-awaited @NHL debut in his hometown pic.twitter.com/xWAOivA9Dg

Tonight in Edmonton, AB former Giants captain makes his NHL debut with his hometown Edmonton Oilers when they take the ice against the San Jose Sharks at 6:30 PM. For Benson, tonight’s NHL debut has been years in the making and has featured a wide array of twists and turns. Here’s a rundown of some key dates/highlights of Tyler Benson’s hockey career to this point:

After a historic season playing for the South Side Athletic Club Southgate Lions, Benson, an Edmonton native was chosen first overall by the Giants in the 2013 WHL Bantam Draft. During the 2012-13 season he broke the AMBHL record for the most points in a season tallying 146 points (57 goals, 89 assists) in just 33 games played.

“I’m excited to be able to play my first Western Hockey League game as a Giant,” said Benson. “It’s going to be a good experience for me, and it’s exciting to know when I’m going to play so I can prepare for it.” – Tyler Benson on October 29, 2013.

Tyler Benson’s WHL debut resulted in a 5-2 victory for the Vancouver Giants over the Tri-City Americans in front of 7098 fans at the Pacific Coliseum. Benson did not score, but he finished with a +1 rating.

At 12:49 of the first period, with his team already leading 1-0, Tyler Benson notched his first career WHL goal on a gorgeous end-to-end rush. Clink the link above to witness Benson’s first of 61 career WHL regular season goals with the Giants.

“We’re extremely proud to name Tyler as Captain. He’s exactly what we look for in a leader. He’s one of our hardest working players every night, and he has won at all levels from minor hockey up through the Ivan Hlinka tournament with Team Canada this past summer.” – Scott Bonner on September 24, 2015.

Despite only appearing in 30 games during the 2015-16 Giants season, Benson was selected by his hometown Edmonton Oilers with the 32nd overall pick in the 2016 NHL Draft.

Everything was on the up-and-up for Tyler Benson. He had 40 points through 31 games for the Vancouver Giants and was rewarded with a three-year entry level contract with the Edmonton Oilers. Unfortunately for Benson, he’d only appear in two more games before injuries (once again) forced him to miss an extended period of time.

The Giants captain is good to go!@TylerBenson_17 will make his season debut tomorrow night against PG.

After several hard months of rehab, Tyler Benson was returned to the Vancouver Giants by the Edmonton Oilers. He made his 2017-18 debut at home against the Prince George Cougars. With his team trailing in the third period, Benson did all he could to spark his team and lead them to victory.

With the Giants trailing Game 6 of their first-round playoff series by a 3-2 score, Tyler Benson delivered one of the most dramatic goals in recent memory for the Vancouver Giants.

The 2018-19 AHL First and Second All-Star Teams have been announced. #AHLAwards

Tyler Benson’s first season of pro hockey couldn’t have gone much better. He led the AHL with 51 points and ultimately secured 66 points in 68 games with the Bakersfield Condors. For his efforts he was named a second-team AHL All-Star.