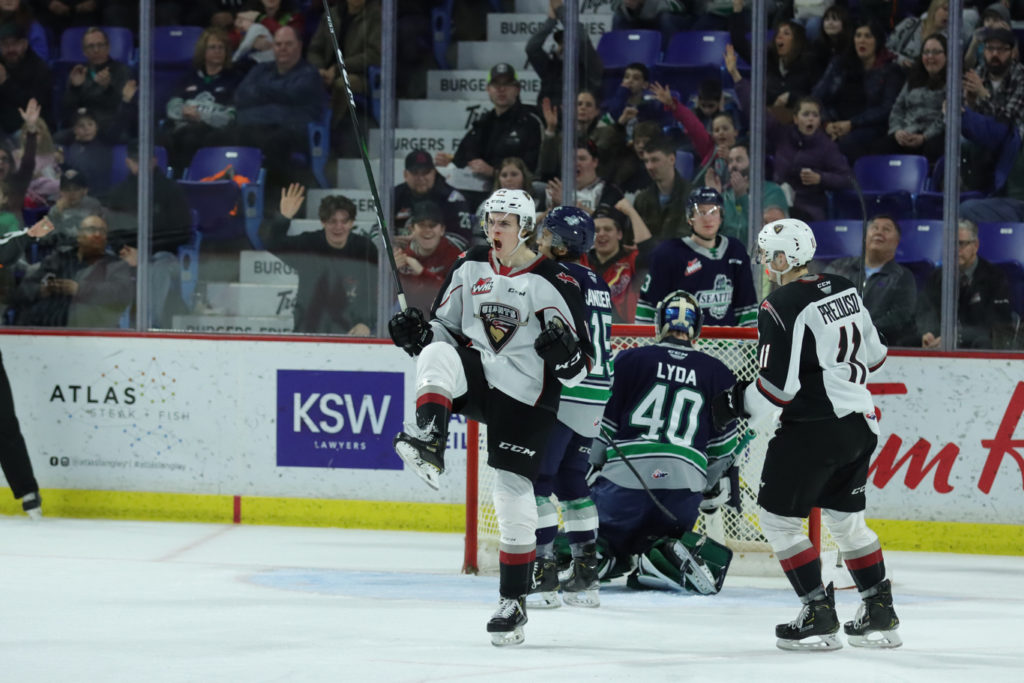 Monday afternoon in front of over 4300 strong at the Langley Events Centre, the Vancouver Giants (29-20-3-2) skated to their 10th straight victory – A 3-2 decision over the Seattle Thunderbirds (21-27-3-3). Eric Florchuk paced the Giants with a goal and two assists while Bowen Byram and Tristen Nielsen also scored. Trent Miner stopped 23 of the 25 Seattle shots fired his way. Seattle got their goals from Conner Roulette and Simon Kubicek. The win for Vancouver, coupled with an overtime loss for the Victoria Royals moves the Giants within a single point of second place in the B.C. Division standings.

GIANTS ARE 8-0 IN FEBRUARY

VAN – Bowen Byram (9) got the ball rolling offensively for the Giants at 13:13 with a power play goal. For Byram it extended his point streak to nine straight games, and his goal-streak to four games. Eric Florchuk and Milos Roman had the assists.

VAN – Tristen Nielsen (28) made it 2-0 on a power play goal at 17:06. For Nielsen, it marked the fifth straight game with a goal. Bowen Byram and Eric Florchuk both helped set it up.

SEA – Thunderbirds rookie Conner Roulette put Seattle on the board with his 17th of the season at 2:33. Roulette did well to shrug off a couple of Giants defenders before converting. Payton Mount had the lone assist.

VAN – Exactly seven minutes later at 9:33, Eric Florchuk padded the Giants lead to 3-1 when he knocked home a Michal Kvasnica pass from beside the Seattle goal. Tyler Preziuso earned the second assist on the play, giving Florchuk 19 goals on the season.

SEA – With 43 seconds left in the third, Simon Kubicek’s shot from the left point snuck through traffic and in, giving him seven goals on the season. Conner Roulette earned his second point of the game, with an assist.

Next Game: The Vancouver Giants look to make it 11 straight wins when they host the Seattle Thunderbirds on Friday, February 21st at 7:30 PM. GET TICKETS

“We played a solid game today. We took advantage of some power plays early and we could have had even more offense off of our breakaways. I liked the way we played defensively tonight. – Giants head coach Michael Dyck

“Up to this point we’ve just focused on a game-by-game approach. We’re no concerned with streaks we’re just concerned about building momentum for the playoffs.” – Michael Dyck