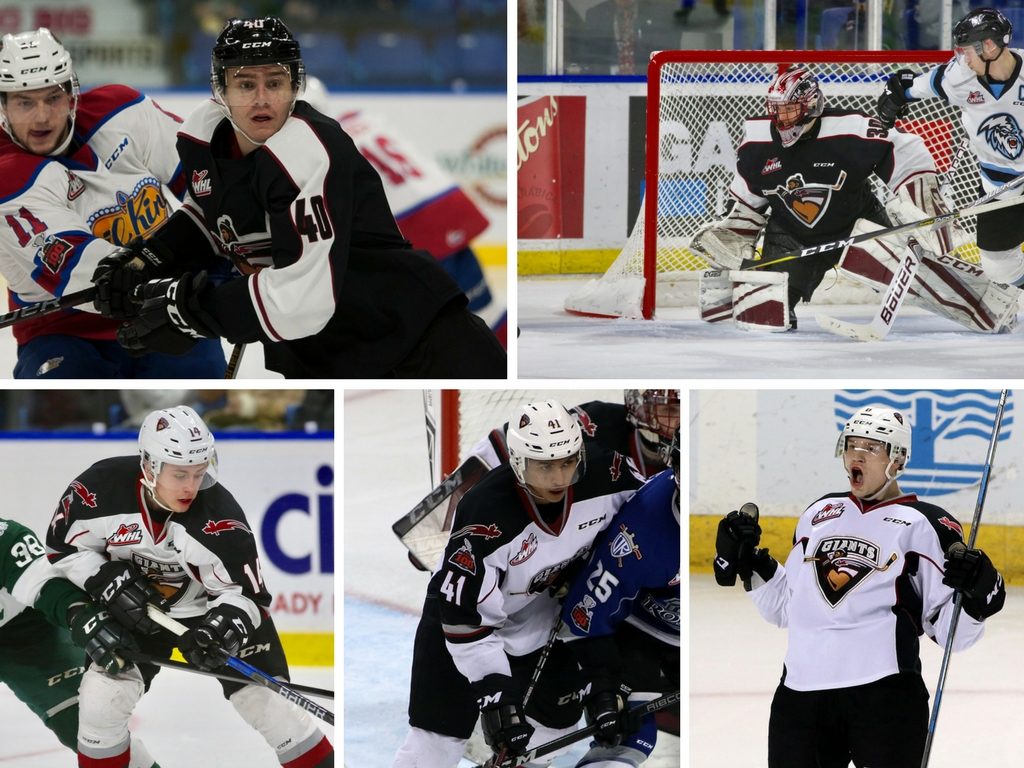 Slovakian forward Milos Roman is ranked #40 among North American skaters while fellow forward James Malm was next at #176. Up next were defencemen Alex Kannok Leipert at #190 and Dylan Plouffe at #208. Between the pipes, David Tendeck was the second-ranked WHL goaltender coming in at #8 on the North American goaltending list.

Originally selected sixth overall by the Giants in the 2017 CHL Import Draft, 1999-born forward Milos Roman has thrived in his first full season in the WHL. Through 34 games, Roman has produced eight goals along with 21 assists for 29 points to go with a +4 rating. Earlier this season he represented Slovakia (for the second time) at the World Juniors and was named to the 2018 CHL NHL/Top Prospect’s Game in Guelph, ON. Unfortunately Roman won’t play in Thursday’s Top Prospect’s Game due to injury.

18-year-old forward James Malm is on pace to set new season highs in goals, assists and points. The Langley, B.C. native is currently second in team scoring with 17 goals, 31 assists (48 points) and is tied for the team lead in plus-minus with a +12 rating. His nine game-winning goals are tops in the WHL. He was originally selected by the Giants in the second round (44th overall) in the 2014 WHL Bantam Draft.

Rookie defenceman Alex Kannok Leipert (born in 2000) has appeared in all but one game for the Giants in 2017-18. The Regina, SK native has two goals and 15 assists for 17 points along with a +5 rating and 46 penalty minutes. He was named the Saskatchewan Midget Hockey League’s Defenceman of the Year last season with the Regina Pat Canadians after he led his team to a league championship and a berth in the Telus Cup tournament. The Giants selected Kannok Leipert in the fourth round (79th overall) in the 2015 WHL Bantam Draft.

18-year-old defenceman Dylan Plouffe has already obliterated his previous season highs offensively. The Sherwood Park, AB product leads all Giants defencemen in both goals (8) and points (36) and is one of three Giants to suit up for all 47 games so far. His +12 rating is tied for the team lead. Plouffe was selected by the Giants in the second round (29th overall) in the 2014 WHL Bantam Draft.

Sophomore goaltender David Tendeck (born in 1999) has posted an overall record of 17-8-1-2 to go along with two shutouts, a 2.86 goals-against-average (third best in the WHL) and a .912 save percentage (fifth best in the WHL). He was named Goaltender of the Week in the WHL for the week ending December 17th and subsequently was named the Giants Player of the Month for December. Since December 1st, Tendeck is 11-2-1-1 in a span of 15 starts.

The Giants eight-game home stand continues Wednesday at the Langley Events Centre when they welcome Edmonton Oilers top prospect Kailer Yamamoto and the Spokane Chiefs to town for a 7:00 PM showdown.