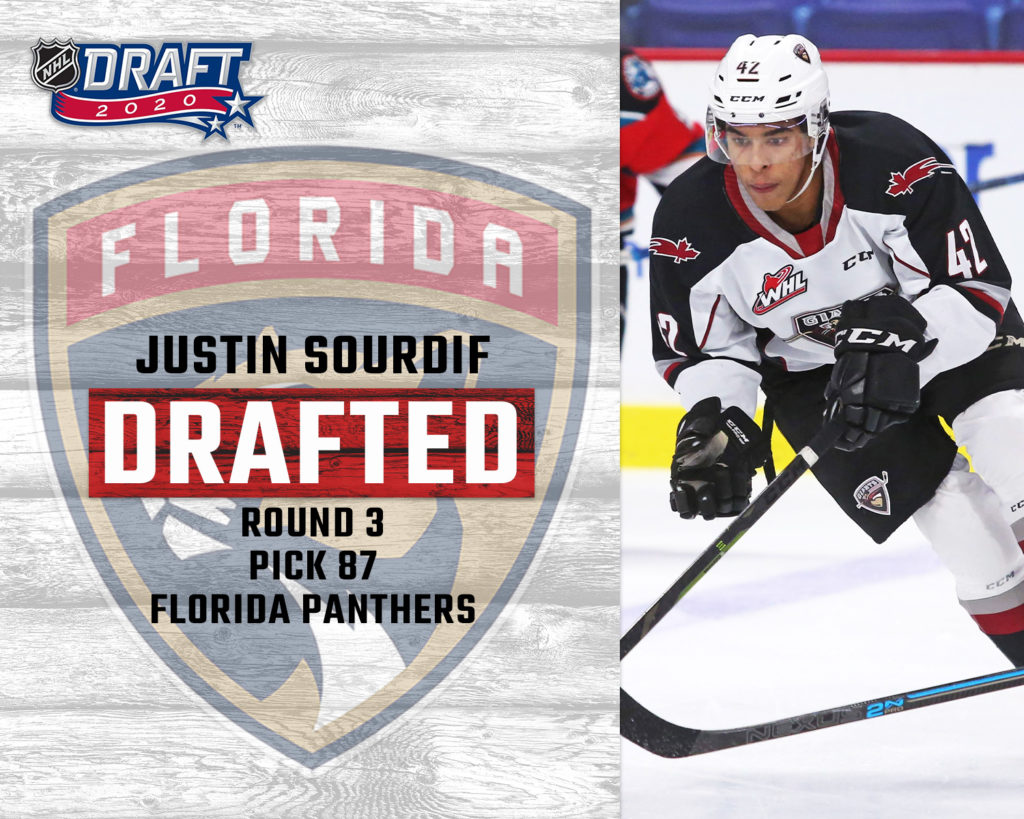 The Vancouver Giants are thrilled to announce that 2002-born forward Justin Sourdif (Surrey, B.C.) has been selected 87th overall (Round 3) by the Florida Panthers in the 2020 NHL Draft.

Couldn’t be happier to be a panther! Thank you @FlaPanthers for giving me the opportunity to realize my lifelong dream. I won’t disappoint…

Sourdif checks in at 5’11” and 173 pounds. He was originally selected third overall by the Giants in the 2017 WHL Bantam Draft. Since then he’s appeared in 125 career regular season games with the Giants and has compiled 49 goals and 51 assists for 100 points along with 75 penalty minutes and a +56 rating. Additionally, Sourdif has suited up in 24 playoff games with Vancouver.

“Justin has played a big part in our team’s success over the past two seasons, and we couldn’t be happier to see him and his family celebrate this accomplishment together today,” said Giants GM Barclay Parneta. “His work ethic and competitiveness are going to serve him well in the seasons to come and we’re excited to work alongside the Florida Panthers to help further his development.”

“Justin is one of our top plus-minus players who goes to the hard areas and plays very well in traffic,” adds Giants Head Coach Michael Dyck. “As he gets bigger and stronger, his upside will only improve.”

Last season Sourdif finished second on the Giants with 26 goals and third on the team with 54 points. In January he suited up in the 2020 CHL/NHL Top Prospects game, and recorded an assist for Team Red. A season prior, Sourdif led all Giants rookies with 23 goals, making him just the third Giant ever to surpass 20 goals during their 16-year-old season.

Internationally Sourdif has represented Canada twice. In the summer of 2019, Sourdif helped Canada secure a silver medal at the Hlinka Gretzky Cup. In 2018 Sourdif served as an alternate captain for Team Canada Red at the World Under-17 Hockey Challenge.

You can follow along with the remainder of the NHL draft right here.

“He’s a guy that can score goals at will. He’s going to go to camp with a chip on his shoulder, and will compete hard for his opportunities. I think he’s got a lot of potential to be a guy like Tyler Benson who by age 21 or 22 can be playing NHL games.” – Zach Hodder – WHL Manager, Player Development

“Justin has a wow factor to him. His talent stands out every night. Over the past three years I’ve become great friends with him and he never fails to put a smile on my face. He plays much bigger than his size, and he is not afraid to go to the hard areas. I believe he will have a lengthy career in hockey.” – Alex Kannok Leipert, Giants Captain

“Justin is a gifted player with a set of skills that come naturally to him. He can do things by himself on the ice.” – Tristen Nielsen, Vancouver Giants Forward

“He’s the kind of guy you want on your team late in a game. He doesn’t get overly stressed but is also very skilled and knows how to win.” – Trent Miner, Vancouver Giants Goaltender

“He’s dangerous offensively. He’s got soft hands and an accurate shot, and doesn’t shy away from physically play. He uses his athletic frame to power his way to the net.” – Marlon Martens – Play-By-Play Broadcaster, Victoria Royals