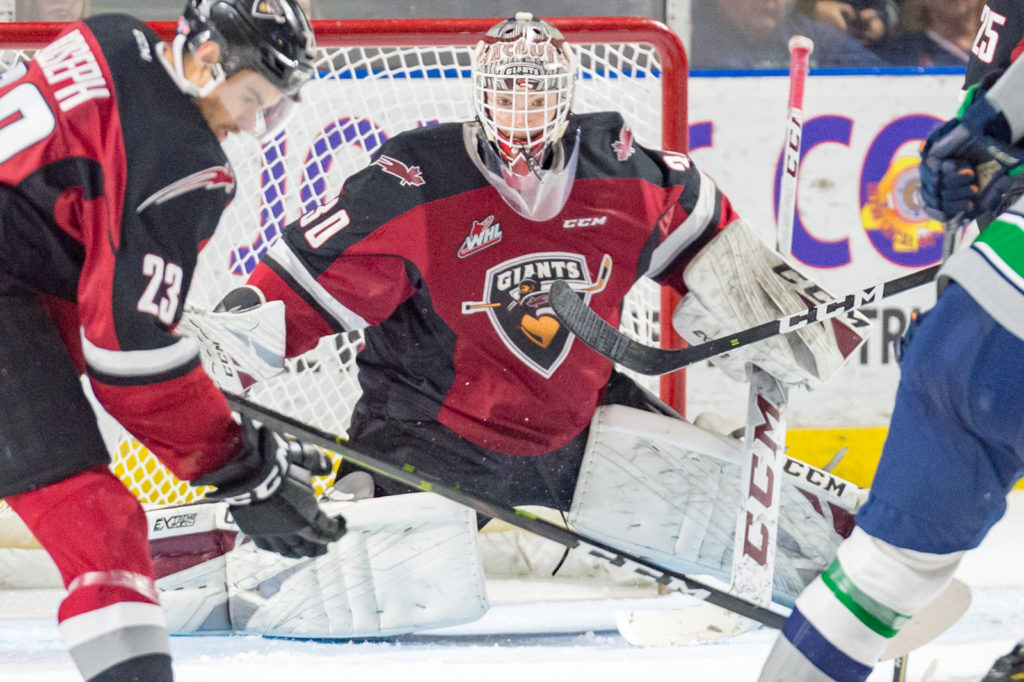 David Tendeck’s journey with the Vancouver Giants was an eventful one to say the least. Perhaps no player in recent memory with the Giants has lived such drastic highs and lows over the course of his tenure in junior hockey. But when you start to reflect on all that David Tendeck has accomplished in his WHL career, you see that the wins and saves are complimented so strongly by an incredible work ethic and a high level of character, both of which were evident from an early age.

May, 2014: David Tendeck is drafted by the Giants

In Round 6 of the 2014 WHL Bantam Draft, the Giants used their sixth round pick to select the North Vancouver native. Tendeck joined a draft class that featured Dawson Holt, Brendan Semchuk, Owen Hardy, Dylan Plouffe, James Malm and Bailey Dhaliwal. Seven of the 11 players selected by the Giants that year would end up playing with Vancouver. Here’s Giants Head Scout Terry Bonner on his early impressions of David Tendeck and how they evolved over time:

“I saw him play a lot with the North Shore Winter Club. He was very poised for such a young guy. His work ethic and his confidence were two things I noticed right away. When I spoke to his coaches, they told me that he was great in the room, he listened, and he wanted to be a goalie. I remember that I pushed really hard to take him. And then next December he was unbelievable at the Mac’s Tournament. He stood on his head. That’s where he really grew on me. The more I watched him, the more I had no doubt that down the road he was going to be a good goalie. His work ethic was second to none and he always had a great ability to bounce back when things weren’t necessarily going well. He has a really strong mental makeup. Things don’t bother him. He just wants to stop the puck.

On September 1st, 2015 the Giants signed both David Tendeck and Alex Kannok Leipert to Standard WHL Player Agreements. Yes in the same announcement the Giants signed their future captain and a goaltender that would eventually go on to become the Giants all-time saves leader. That announcement on September 1st in hindsight might have been one of the more noteworthy ‘under the radar’ signings in recent WHL memory. At the time, Jason Ripplinger was the Giants Director of Player Personnel. Here’s his take on Tendeck:

“He reminded me a lot of Josh Harding because of his stature. He was always calm. Nothing rattled him. That and he was always humble and always positive. That’s why he became the goalie that he is right now. Once we had drafted him, every time we saw him play, he played well. It helped that he came from an awesome family. We knew early on that he was a goalie that we wanted to sign. We felt that David was a bigger goalie that we could sign and be patient with. I think a lot of us felt that it was just a matter of time before he could take the ball and run with it.”

It was early November of 2016 and the Vancouver Giants had a home tilt with the Lethbridge Hurricanes at the Langley Events Centre. David Tendeck got plenty of run support from his teammates as the Giants skated to a 7-3 victory, giving Tendeck his first of 72 career regular season WHL wins.

A month prior the Vancouver Giants had made some moves at the 2017 Trade Deadline to get younger. The G-Men were already starting to evaluate their roster with an eye on next season, and in early February David Tendeck got tapped on the back for a road tilt against the B.C. Division leading Prince George Cougars. Tendeck turned aside 38 shots from the Cougars en route to a first-star performance in a 3-2 victory for the Giants in a shootout. Assistant GM Peter Toigo remembers that game clearly:

“We had a bunch of signed goalies at that point in time and as that season was winding down we had to figure out what we had. That game in Prince George definitely emphasized to us that we had ‘something’ with David Tendeck.”

Two days before the 2017-18 season was set to begin, the Vancouver Giants traded popular veteran goaltender Ryan Kubic to the Saskatoon Blades. At the time of the deal, Tendeck had just 24 games (and five wins) of WHL experience under his belt. But after an impressive summer and a strong training camp, the Giants felt that David Tendeck was just starting to come into his own. It took a few months, but their trust would end up paying off in a major way according to Peter Toigo:

“Both David Tendeck and Todd Scott had strong training camps that year. It came down to a leap of faith and an opportunity. And to David’s credit he completely seized the opportunity.”

David Tendeck’s first WHL shutout was a memorable one indeed. The 2017-18 Portland Winterhawks boasted a roster that featured future NHL’ers Cody Glass, Kiefer Bellows, Henri Jokiharju and Joachim Blichfeld, yet on December 8th in Portland Tendeck stopped all 38 shots he faced en route to an impressive 1-0 victory for the Giants.

On a night that will be largely remembered for Ty Ronning’s historic 49th goal, David Tendeck’s 49 saves that night helped a battered, injured Giants team force overtime against the Seattle Thunderbirds.

David Tendeck had turned a 25-16-3-2 record and an all-star season with the Vancouver Giants into a one-in-a-lifetime moment. In Round 6 of the 2018 NHL Draft, the Arizona Coyotes selected David Tendeck to their organization.

On November 8th, 2018 with all of Canada watching, David Tendeck earned Player of the Game Honours for Team WHL against Russia in game that just so happened to be played at the Langley Events Centre.

RECAP: David Tendeck earned Player of the Game honors for @TheWHL Tuesday in a hard-fought 3-1 loss against Team Russia in Game 2 of the 2018 @cibc Canada Russia Series at the @LangleyEvents!

In Rounds 1 and 2 of the 2019 WHL Playoffs, David Tendeck and his younger counterpart Trent Miner split play evenly in the first two rounds as the Giants would go on to defeat both the Seattle Thunderbirds and Victoria Royals. Once Round 3 arrived, Tendeck took over the crease permanently and started every game for the Giants on their way to Game 7 of the WHL finals.

On May 10th, 2019 the Giants needed a victory to keep their season alive. David Tendeck made 37 saves in front of 5000-plus at the Langley Events Centre, ensuring that the Giants would take the series back to Prince Albert for Games 6 and 7.

A full deep dive of this game can be found here, but in short: David Tendeck made 40 saves and was masterful in leading the Giants to a 3-2 road victory in Kamloops amidst some crazy travel circumstances.

Yesterday it became official: David Tendeck had signed with the Arizona Coyotes.

Since January 2018, David Tendeck and Trent Miner have shared the Vancouver Giants goal crease. Much has been made of the fact that while both goaltenders found remarkable success individually, it never came at the expense of the team and their friendship together.

Here’s Trent Miner on his early impressions of David Tendeck and how things changed with time:

“He was a quiet guy. But he was a leader at camp during his 18-year-old season. He showed us the proper way to do things. He got a little more vocal at 19, but was always a quiet leader. He was always doing the right thing. Watching him work every day gave me the right idea of how to do things. I was able to learn a lot from him both on and off the ice. There wasn’t anybody during my time with the Giants who didn’t greatly appreciate having David Tendeck in our room. Everyone listened when he spoke and everybody trusted him no matter what.”

Trent Miner on what made he and David Tendeck such great friends:

“We are very opposite personalities. Dave is quiet and when we hanging out I’m usually the one yapping and he’s the one listening. But he’s taught me a lot about music and I think we’ve always just both been very open-minded with each other’s interests. We were always learning from each other and improving to both get better. As friends we’ve always been two different personalities that have figured out what we liked the best about each other.”

Miner on the competitive balance and never letting it negatively effect the team:

“Dave and I always had a competitiveness against each other, especially in practice. But it was always a “I’m going to help you do what you can do to be ready to win.” It was never one or the other with us. Whenever you played the Giants you were playing both of us because we kept pushing each other to be at their very best.”

“I couldn’t have been happier. I was ecstatic for him. Nobody deserves it more than David. He’s always been a leader and has improved his game so much over the years. It just says so much about his character. I agree that he deserves it and I couldn’t be happier for him.”

The Giants wish to congratulate David Tendeck on signing his NHL contract with the Arizona Coyotes. A huge thanks as well to Terry Bonner, Peter Toigo, Jason Ripplinger and Trent Miner for contributing to this story.