David Tendeck: A Great Teammate and a Big Hole That’ll Be Hard To Replace 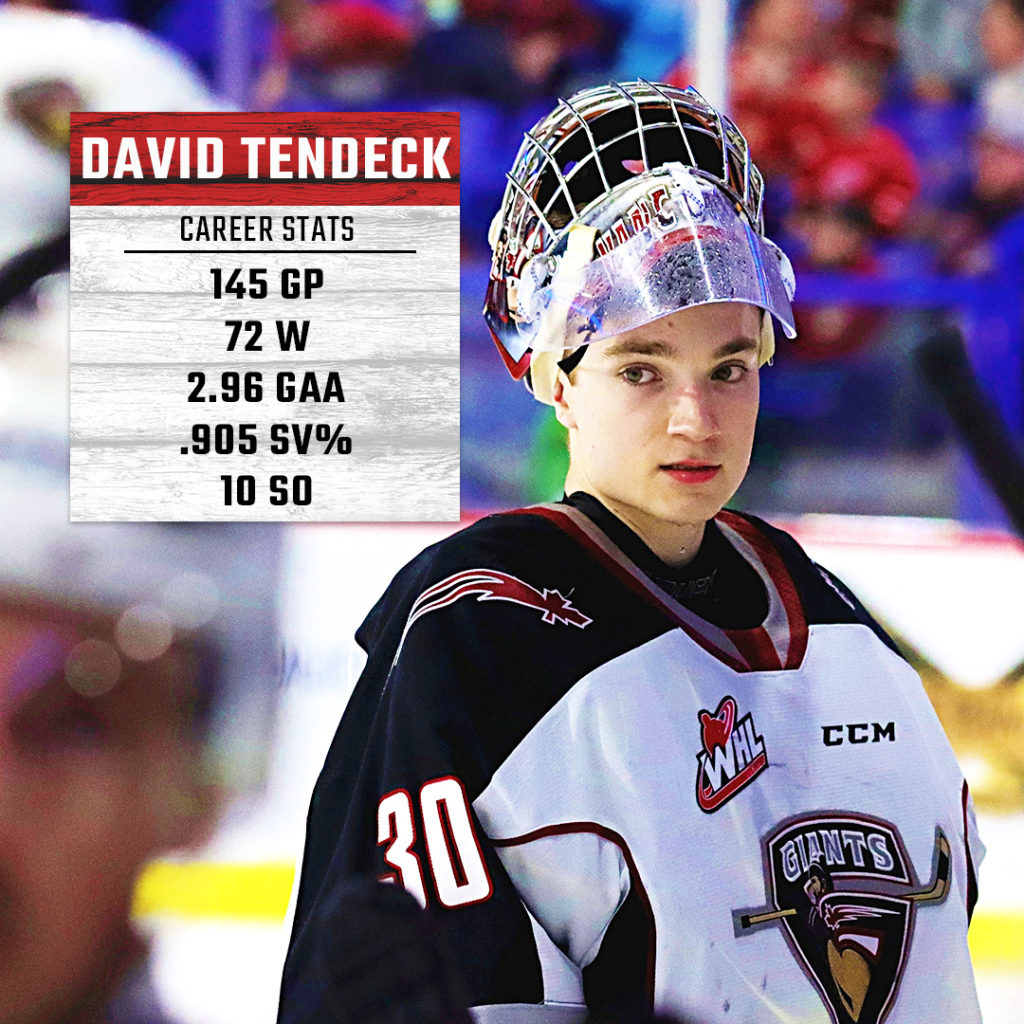 David Tendeck has seen it all during his four-year tenure with the Vancouver Giants. As a 17-year-old rookie in 2016-17, Tendeck won five games in 22 appearances as the Giants struggled to a 10th place finish in the Western Conference standings. A year later he was a WHL all-star and an NHL draftee.

Days before the 2017-18 season began the Vancouver Giants traded popular veteran goaltender Ryan Kubic to the Saskatoon Blades, essentially handing the goaltending keys to Tendeck. He rewarded the Giants for their faith with a 25-16-3-2 record, three shutouts and a .912 save percentage. That season he made 40-or-more saves five times. The Giants were 5-0 in those games. Tendeck led the Giants to their first playoff appearance in a span of four years, and was named a WHL Western Conference second-team all-star for his efforts. In June the Arizona Coyotes drafted David Tendeck in Round 6 making him the second Giants goaltender to ever be selected in the NHL Draft.

The @WHLGiants are set to counter with David Tendeck in net, the makings of an epic battle in net!#WHLChampionship pic.twitter.com/c3WlkwuAyk

In 35 appearances in 2019-20, Tendeck posted a record of 18-13-1-1. He finished his WHL career with 72 wins and 145 games played, ranking him second all-time for the Giants in both categories. He also leaves as the all-time saves leader in franchise history.

As evidenced on this penalty shot, David Tendeck’s got ice in his veins. pic.twitter.com/Xo3u27XrMD

David Tendeck’s on ice accomplishments won’t soon be forgotten, nor will his impact on off the ice.

“He was a rock back there for us. Everybody goes through ups and downs and through the past few seasons there weren’t too many downs, but when there were downs he handled them well. He handled them like a pro. He never looked for pity or never pointed any fingers or created drama. All he did was work hard and supported Trent and supported the team. He was probably our hardest worker in practice. He had an unbelievable work ethic and was a highly competitive kid. But he also had a quiet sense of humour.

Michael Dyck speaking about David Tendeck’s character and what lies ahead for him:

One thing I’ll miss about him is: You always knew when he was in the dressing room because he played the best music. Lots of classic rock. He always arrived early so that he could play it. I’m really going to miss him both on and off the ice. It was a pleasure to coach him and a pleasure to be around him. He’s one of the biggest reasons for our banners last year. Guys like that will always find ways to be successful and to me he was the best goaltender in the Western Hockey League and I really hope he can take his career next to another level with the Coyotes.

“You can’t replace a guy like David Tendeck. The best thing is that Trent Miner got to work with him and they became close. Trent had a great mentor in David Tendeck and we’ll certainly miss having him around the ice and the dressing room. A great teammate and certainly a big hole that is going to be hard to replace. Certainly for me I’m very happy that I got to work with him for two years.”

Lastly, some words from Vancouver Giants Goaltending Coach Paul Fricker who has worked closely with David Tendeck for the past five years:

“Talent aside,  David Tendeck is first and foremost a good person and teammate, a dedicated student of his position, and a quiet leader that led by example in games, practices, the gym, and away from the rink. The way Dave managed his time as a Giant is a “How too” example for any young athlete looking for a template to succeed. He trusted the process and thus developed himself  into one of the best goalies in the CHL. He leaves the Giants with an excellent body of work on his resume, respect from his coaches and teammates and gratitude from his goalie coach.”

The entire Vancouver Giants organization would like to extend a heartfelt thank you to David Tendeck for the positive impact and legacy that he leaves behind after parts of five seasons with the team. Good luck in both hockey and in life, and please don’t be a stranger!