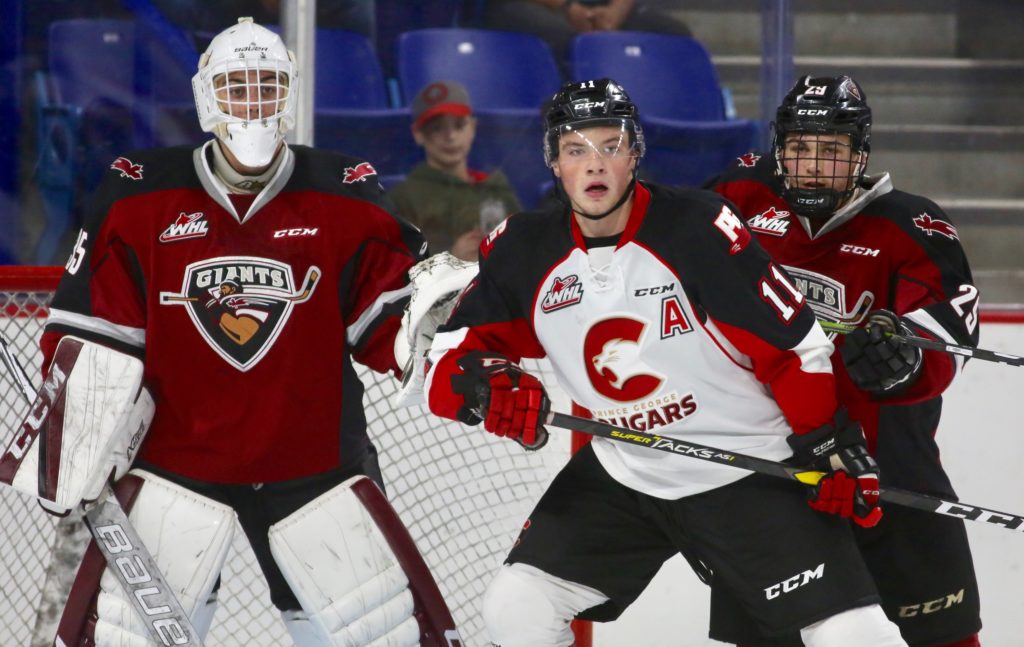 Saturday night at the Langley Events Centre the Vancouver Giants fell 7-3 to the Prince George Cougars. Max Kryski led the Cougars with two goals while Josh Curtis and Tyson Upper each chimed in with a goal and an assist. James Malm, Yannik Valenti and Tyler Ho countered with goals for Vancouver while Davis Koch added two assists.

Prince George jumped out to a 2-0 lead in the first period thanks to a pair of goals that came a minute and 40 seconds apart. Vladislav Mikhalchuk opened the scoring at 12:58 and then Max Kryski buried his first of two on the night at 14:38 to double the Cougars advantage. Despite trailing by two, the shots were 12-8 after one favoring Vancouver.

26 seconds into the second period the Giants got on the board when Yannik Valenti pounced on a rebound and knocked a backhand shot past Taylor Gauthier for his third goal of the weekend. Valenti’s goal was one of two power play tallies on the night for Vancouver.

The visitors stormed back with three unanswered goals. First it was Josh Curtis converting off a Tyson Upper pass at 8:54. Then at 15:37 Upper scored off a Josh Curtis feed to make it a 4-1 game. Ilijah Colina then snagged a shorthanded goal at 17:23 to make it a 5-1 game which is how the second period would end. Prince George outshot the Giants 18-8 in the second period.

Vancouver’s power play got them back in business just a minute and 14 seconds into the third period. James Malm whacked home a Davis Koch rebound for his second of the weekend to make the game 5-2. Tyler Ho then scored his first of the pre-season at the seven-minute mark to move the G-Men back within two. Unfortunately that’s as close as the Giants would get.

Cole Moberg erased all hopes of a Giants comeback when his low shot snuck through the legs of Drew Sim at 9:10 to make it a 6-3 game. Then Max Kryski finished the game’s scoring at 15:58 off the rush to make it 7-3.

Between the pipes, Taylor Gauther played the full game for the Cougars and went 28-for-31 while the tandem of Braedy Euerby and Drew Sim combined for 33 saves on 40 shots faced. Prince George finished one-for-six on the power play while Vancouver finished two-for-three.

Next up for the Giants: The Everett Silvertips tomorrow at 4 PM. That game will wrap up the three-day, four-team, five-game pre-season showcase tournament taking place at the Langley Events Centre.

– Rookie forward Yannik Valenti scored his third goal of the pre-season for the Giants and is now tied with Brayden Watts for the team’s pre-season goal-scoring lead.

– The Giants power play is now six-for-27 through five pre-season games and has a 27.2 percent success rate.

– With another goal tonight, James Malm now has two goals and two assists for four points in two pre-season games. His four pre-season points put him tops on the team in exhibition scoring.