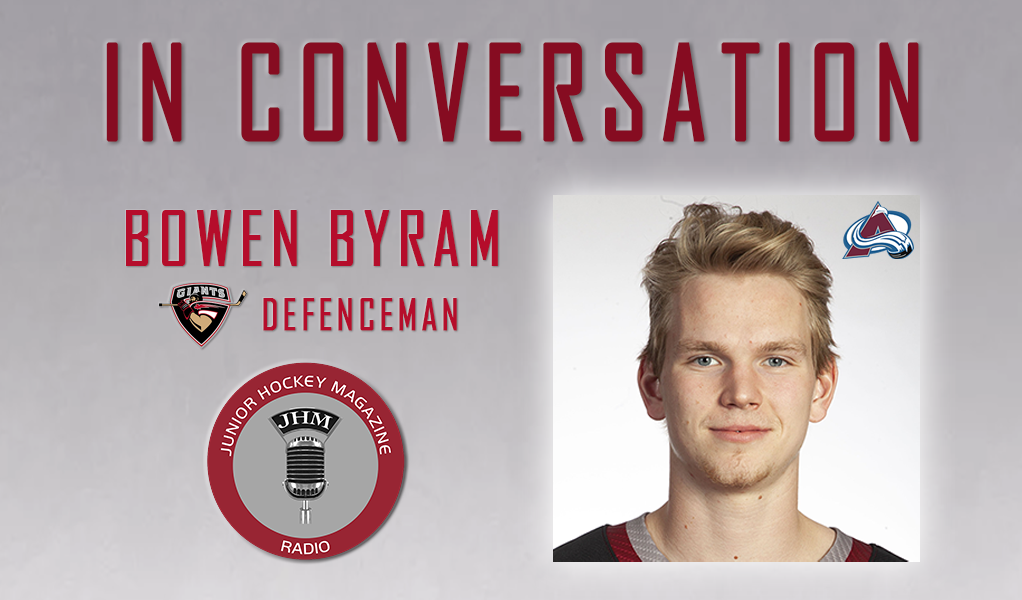 Selected fourth overall by Colorado, the Vancouver Giants defenceman recently spoke with Junior Hockey Magazine about his experience at Avalanche training camp, what he learned from the opportunity, how he plans to continue to improve his game, as well as the chance to represent Canada nationally at the 2020 IIHF World Junior Hockey Championship:

Junior Hockey Magazine: Give us a sense of what the experience was like of playing in preseason games with the Colorado Avalanche.

Bowen Byram: It was really cool being around a lot of good players. Nathan MacKinnon is one of the best in the world, Gabriel Landeskog, guys like that, so it was pretty surreal for me, honestly. I tried to be a sponge and soak everything in, and I tried to do my best to make the team. Obviously it didn’t work in my favour but I wasn’t ready to go so I wasn’t too crushed about being sent back to junior. All in all, I think I used the experience as a positive and a chance to get better at hockey.

JHM: What can you take from your experience knowing the step up maybe isn’t that far off age-wise from players like Cale Makar and Samuel Girard?

BB: It’s pretty cool to see those guys play, playing a big role, and doing so well. Cale and Sam are both really good players and really good guys off the ice, so to see them having early season success is definitely nice to see and it’s very good for the organization as well. There is a lot of things I can take from those two and a lot of guys on the team that I can implement into my game, my personality, my leadership qualities, etc. It was a really cool experience getting to know everybody on the team and just getting the chance to be around those types of players.

JHM: What was your experience like getting to meet and talk with Avalanche general manager Joe Sakic?

BB: He’s a super good guy. He always seems to be in a great mood no matter what happened the night before in the game, so it’s definitely kind of nice to have a GM like that who is pretty relaxed and laid back. He’s a super good guy and he knows the game really well. He’s definitely done a good job with the Avalanche so far and hopefully that will continue into the future.

JHM: What is it like when you hear somebody of Craig Button’s stature say you can become a No. 1 defenceman and challenge for the Norris Trophy?

BB: That’s pretty cool for sure. I’ve worked hard throughout the summers and hockey season to put myself in a good position. I feel like I did that last season and throughout the summer last year, so to get some accolades like that from such a well-known name is definitely pretty cool. At the end of the day, I haven’t really proven anything yet at the next level, and I still have stuff to prove at this level. I am just trying to get better every day, work hard, and be an example for younger guys on my team and other guys. It’s pretty cool to hear something like that but I think I still have a long way to go.

BB: I definitely think the offensive side of the game comes easiest to me, so I think I’d describe myself as an offensive guy, but I take a lot of pride on the defensive side of the puck as well. Obviously that’s something I need to improve on just like everybody has certain areas they need to get better at, but that’s something I definitely key in on, especially if I want to move on to the next level where there are bigger, stronger, more skilled, more smart players.

JHM: What was the experience like for you at the World Junior Summer Showcase?

BB: It was pretty cool. I think the nicest part was just seeing some buddies that you normally don’t get to see that often, whether they play in different leagues or on different teams. It’s always nice to get to know some new guys as well. Just competing with the best from around the country and being on the ice with the best around the world is always a super cool moment and definitely something that I take a lot of pride in. Obviously wearing the Maple Leaf is something that a lot of people dream of, and when I am fortunate enough to get the opportunity, I definitely try to make the most of it.

JHM: What were you experiences like as a kid watching the World Juniors? What would it be like for you to get that opportunity to play with Team Canada this Christmas?

BB: I remember always being tuned in to the tournament throughout the Christmas break at school. My family would always watch the big Canada games. My most memorable moment is probably when Jordan Eberle tied that goal to tie it up against the Russians. I remember everybody was going pretty nuts. I have a lot of fond memories of the World Juniors and now that I have a chance to push for a spot on the team it’s pretty surreal. I have to live in the moment. I have to play my game, be myself around the rink, around the guys, around the coaching staff, and do what I do. I am confident in what I do and in how I play, so I just have to perform up to par and push for a spot.