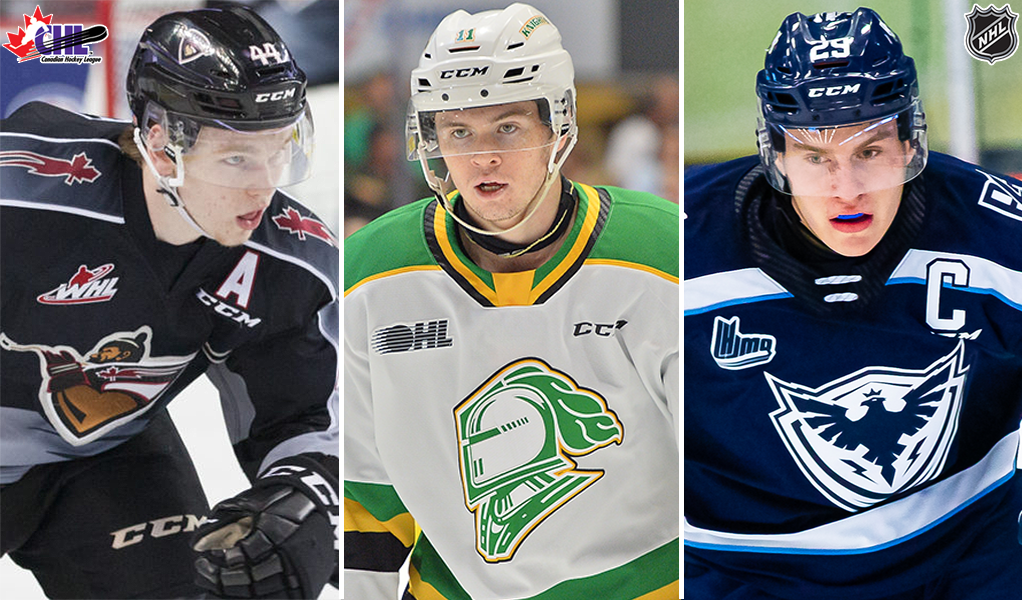 A group of 16 Canadian Hockey League stars could have their 2019-20 seasons extended with summer invitations to National Hockey League Training Camps as part of Phase 3 in the league’s Return to Play Plan.

Camps opened on Monday and will continue until July 26 when travel to one of two hub cities will begin Phase 4 and resumption of play with Stanley Cup Qualifiers starting August 1 in Edmonton and Toronto.

The 16 CHL players are spread out over 14 of the 24 competing NHL teams whose rosters are limited to 30 skaters plus goalies. Nine of the players are from Ontario Hockey League teams, five from the Western Hockey League, and two from the Quebec Major Junior Hockey League. The list includes eight forwards, six defencemen, and two goaltenders.

Suzuki was a first round pick of the Hurricanes in the 2019 NHL Draft and produced 58 points over 44 games this season including 35 in 23 appearances with the Spirit after a deadline trade with the Barrie Colts who chose him first overall in the 2017 OHL Priority Selection.

Regula signed with the Blackhawks in November after his rights were acquired in a trade with the Detroit Red Wings who chose him in the third round of the 2018 NHL Draft. The Knights co-captain finished sixth among OHL defencemen in scoring with 60 points in 56 games.

Byram was the first defenceman chosen in the 2019 NHL Draft going fourth overall to the Avalanche. The World Junior gold medalist finished tied for seventh among WHL rearguards with 52 points in 50 games this season.

Foudy has already played for the Blue Jackets this season picking up an assist over two games of an emergency recall in February. The 2018 first rounder and Knights co-captain matched a career-high with 68 points produced over 45 games this season while also winning World Junior gold for Canada.

Dellandrea’s 70 points in 47 games helped the Firebirds to a record breaking season while the captain finished his OHL tenure as a franchise leader in all-time points, goals, and assists. The World Junior gold medalist was a first round pick by the Stars in 2018.

Harley was the Stars first round pick in 2019 and finished seventh among OHL defencemen in scoring with 57 points in 59 games for the Steelheads.

Selected by the Oilers in the second round back in 2018, Rodrigue won 31 of his 39 appearances for the Wildcats this season posting six shutouts with a goals-against-average of 2.32 and save percentage of .918. He was Canada’s third goaltender at the 2020 World Junior Championship.

Addison tied Byram with 52 points in 50 games during his fourth season with the Hurricanes. The World Junior gold medalist was a second round pick by the Pittsburgh Penguins in 2018 but became a member of the Wild through a trade in February.

Tomasino was one of six CHL players to reach the century mark for points this season finishing fourth in OHL scoring with 40 goals and 60 assists in 62 games. The Predators first round pick in 2019 joined the Generals in January from the Niagara IceDogs and scored 43 points in his last 26 games.

Zamula was limited to just 28 games on the Hitmen blue line this season producing exactly a point-per-game in that time. The Flyers Free Agent signee competed for Russia at the World Junior championship and earned a silver medal.

Poulin set a career-high with 77 points in 46 games for the Phoenix who established franchise records as part of their first place QMJHL finish. The captain was a first round pick by the Penguins in 2019 and had a season highlighted by an eight-point performance with two goals and six assists on October 20.

Hofer backstopped Canada to gold and the Winterhawks to a first place finish in the WHL standings with 34 wins that tied for the league lead. The Blues fourth round pick in 2018 had four shutouts with a goals-against-average of 2.49 and save percentage of .915.

Tucker finished eighth in scoring among OHL defencemen with 56 points in 55 games including 27 in 27 since joining the Firebirds from the Colts. The Blues seventh round pick in 2018 exploded for seven points on February 17 with a two-goal and seven-assist performance against the Sarnia Sting.

Robertson led the league with 55 goals in just 46 games and finished 10th in OHL scoring with 86 total points for the Petes. The CHL’s Sportsman of the Year award recipient was a second round pick by the Maple Leafs in 2019.

Krebs was a first round pick by the Golden Knights in 2019 and returned from an off-season achilles injury in November to produce 60 points in 38 games as captain of the ICE.

McMichael finished third in OHL scoring with 102 points in 52 games for the Knights while also winning gold for Canada at the World Juniors. He was a first round pick by the Capitals in 2019.