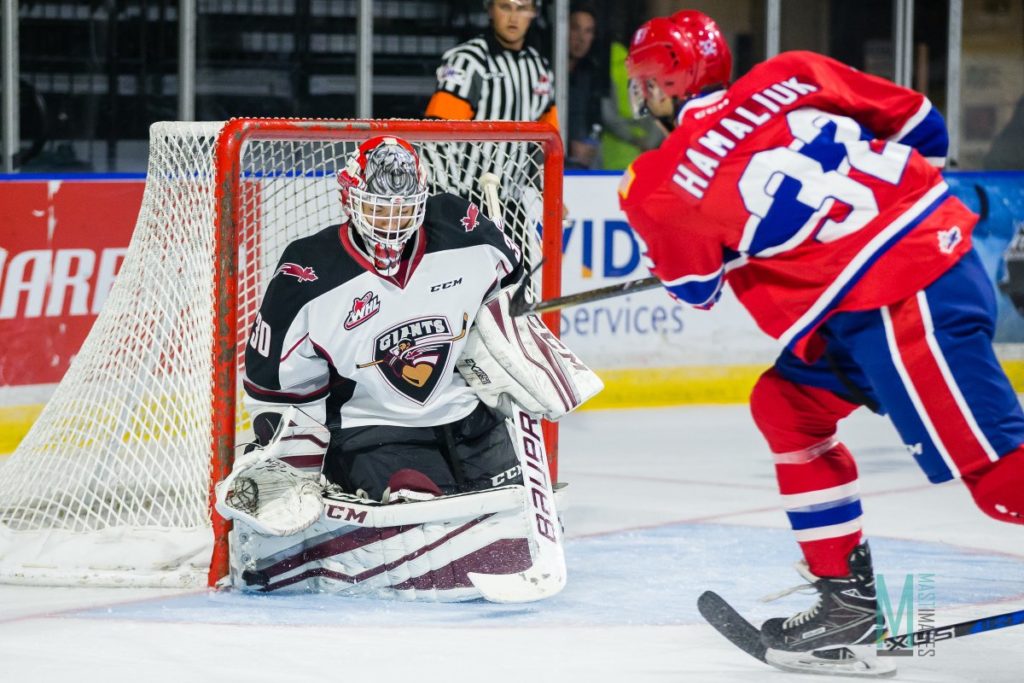 Saturday afternoon in Everett, WA the Vancouver Giants dropped a 3-1 decision to the Spokane Chiefs. Hayden Ostir scored twice in the second period for Spokane while Rykr Cole added a single past the mid-way point of the third to provide the Chiefs with some insurance. Darian Skeoch had the lone tally for the Giants which came early in the first on a power play. The Vancouver goaltending tandem of David Tendeck and Jacob Wassermann combined to stop 38 of the 41 shots fired their way while Donovan Buskey and Declan Hobbs went 28-for-29 for Spokane.

4:44 into the opening period the Giants found pay dirt on the power play. 20-year-old Darian Skeoch took a pass at the right point from James Malm, maneuvered to the middle and snuck a shot through a maze of bodies and past Donovan Buskey to stake the G-Men to a 1-0 lead.

The Chiefs, fresh off a 7-3 loss a night ago to Portland had a heavy veteran presence in their lineup and that experience showed. They outshot Vancouver 14-6 in the opening period, but some strong goaltending from David Tendeck helped the Giants maintain their lead which they took into the first intermission.

Hayden Ostir kick-started the Spokane offense at 2:53 of the second period with a power play marker. Ostir snuck into the slot and one-timed home a pass from Ethan McIndoe for his first of the preseason.

With the teams skating four-on-four the Chiefs would take the lead thanks to some more heroics from Ostir. The 18-year-old notched his second goal of the game off a quick shot from the slot. The play was set up by defenceman Ty Smith at 11:54. Spokane led 2-1 after 40 minutes and were outshooting the Giants 29-16.

Through the first 12 minutes of the third, the teams traded chances back and forth, but the gam would ultimately be put away at 12:55 when 20-year-old Rykr Cole snapped home his first of the preseason past Wassermann off an odd-man rush.

Spokane finished the game with 41 shots while the Giants countered with 29. On special teams the Giants finished one-for-six on the power play while the Chiefs ended up one-for-seven. Through two games the Giants power play is 2/12 (!6.6 percent) while their penalty kill is an impressive 14/16 (87.5 percent).