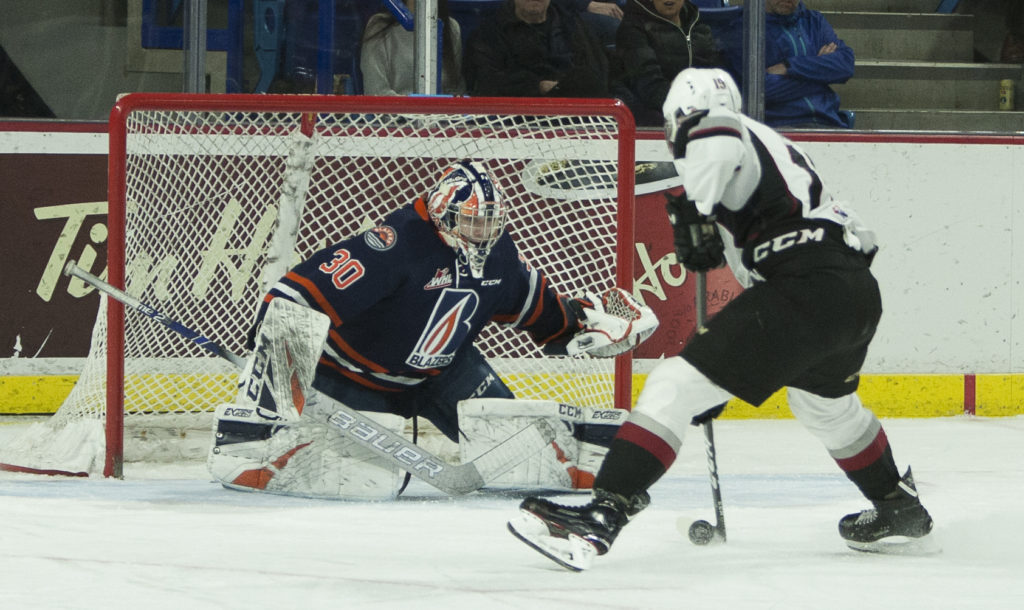 With six games remaining in their 2018-19 regular season, the Vancouver Giants find themselves tied for first place in the Western Conference standings. Sunday afternoon at the LEC in front of 4240-strong, the Giants secured a 5-4 overtime victory over the Kamloops Blazers. For a fifth time this season, 2019 NHL Draft prospect Bowen Byram scored an overtime winning goal to go along with his two assists during regulation. Calgary Flames prospect Milos Roman chimed in with two goals and two assists, giving him nine points in his past three games. Brodi Stuart scored twice in response for Kamloops while Luke Zazula added three assists. The win helped the Giants improve to 7-0 on the season against Kamloops.

VAN – Milos Roman (26) extended his point streak to nine games when he converted off a three-way passing play with Bowen Byram and Justin Sourdif.

KAM – With one minute remaining in the first, Brodi Stuart notched his first of two on the night on a five-on-three power play. Stuart’s 18th came off a Martin Lang rebound.

VAN – After being robbed by Blazers goaltender Dylan Garand on a breakaway in the first period, Tristen Nielsen (13) made good on his nexdt breakaway chance at 1:56. Jadon Joseph and Lukas Svejkovsky earned assists on Nielsen’s fifth goal of the season against Kamloops.

VAN – Dylan Plouffe put the Giants back ahead at 3:28 of the final frame on a power play when he snuck into the right-wing circle and snuck a shot past Garand on the glove side. Justin Sourdif and Milos Roman assisted on Plouffe’s sixth goal of the season.

KAM – Back came Kamloops at 7:42 when Brodi Stuart notched his second power play goal of the contest of a redirect in front of the Giants goal. Zane Franklin and Martin Lang assisted.

VAN – With just under three minutes to play (17:02), Milos Roman (27) gave the G-Men a 4-3 lead on their third power play chance of the game. Roman’s goal was assisted by both Bowen Byram and Davis Koch.

KAM – 59 seconds later Kamloops tied the game when captain Jermaine Loewen one-timed a Connor Zary pass home for his 24th goal of the season. That meant that overtime would be needed for a third time in seven meetings between the two clubs.

VAN – Just 29 seconds into overtime Bowen Byram delivered his league-leading fifth overtime winning goal when he raced wide on a Blazers defenceman down the left-wing side, skated into the left-wing circle and zapped his 24th goal of the season past Dylan Garand. Byram’s 24th goal ties him with Kevin Connauton for the single-season record for goals scored by a Giants defenceman. Jared Dmytriw and Milos Roman assisted on the OT winner.

Vancouver: 2/3 on the Power Play

Kamloops: 2/4 on the Power Play

Next Giants Game: Another tilt with Kamloops on Wednesday night back in Kamloops at 7:00 PM.