Byram Makes History In A 7-4 Giants Win Over Kamloops 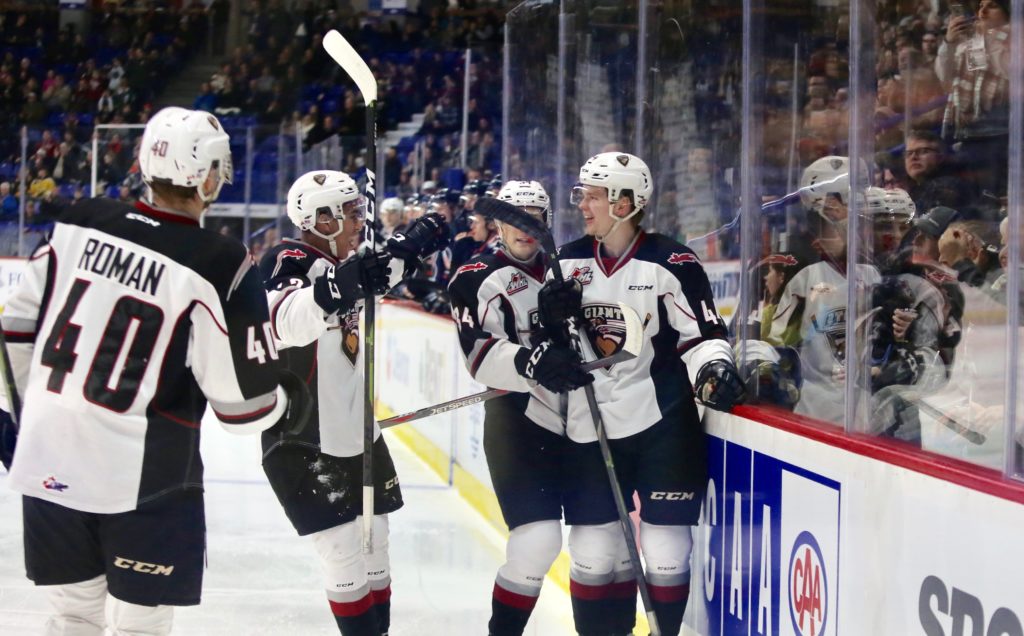 Saturday night in front of 4200-plus at the Langley Events Centre the Vancouver Giants (25-12-2-0) kicked off their 2019 home schedule with a 7-4 victory over the visiting Kamloops Blazers (15-22-2-1). Bowen Byram paced the Giants offense with two goals and three assists, setting a new single-game franchise record for points for a Giants defenceman. Milos Roman added a goal and three assists and Davis Koch and Tristen Nielsen each had a goal and two assists for Vancouver. Jermaine Loewen responded with two goals for Kamloops. Between the pipes, Trent Miner stopped 24 of Kamloops’ 28 shots while the tandem of Dylan Ferguson and Dylan Garand stopped 31 of 38 Vancouver shot opportunities. The win for the Giants coupled with Victoria’s loss in Everett moved the Giants seven points ahead of Victoria for first place in the B.C. Division standings. It was the second win in a row for the Giants altogether.

In @TheWHL action Saturday, @WHLGiants @BowenByram with a 5️⃣ 👉 night, lighting 🚨🚨and filling the 🗑 with 🍏🍏🍏. Top notch prospect for #2019NHLDraft

KAM – Travis Walton redirected home a feed from Kobe Mohr at 17:02 to move Kamloops back within one.

VAN: – Justin Sourdif (10) whacked home a Milos Roman rebound 46 seconds into the period to make it a 4-2 game for Vancouver. Bowen Byram had the second assist.

VAN: Tristen Nielsen (5) ripped home his fifth goal of the season through traffic at 2:15, spelling the end of the night for Kamloops starter Dylan Ferguson.

VAN: Brayden Watts (10) made it 6-2 when he beat Dylan Garand glove-side from the left-wing circle. Bowen Byram and Milos Roman assisted.

VAN: Davis Koch (12) extended the Giants lead to 7-2 when he tipped home a Tristen Nielsen feed at 16:16. Bowen Byram had the second assist, setting a new Giants record in the process.

KAM: Kobe Mohr (5) beat Trent Miner with a snap shot from the left-wing circle on a power play at 6:35.

KAM: Blazers captain Jermaine Loewen (14) notched his second of the night on a wrap-around at 11:31 to round out the game’s scoring.

Next Giants Game: Tomorrow at 4 PM against the Victoria Royals at the LEC.