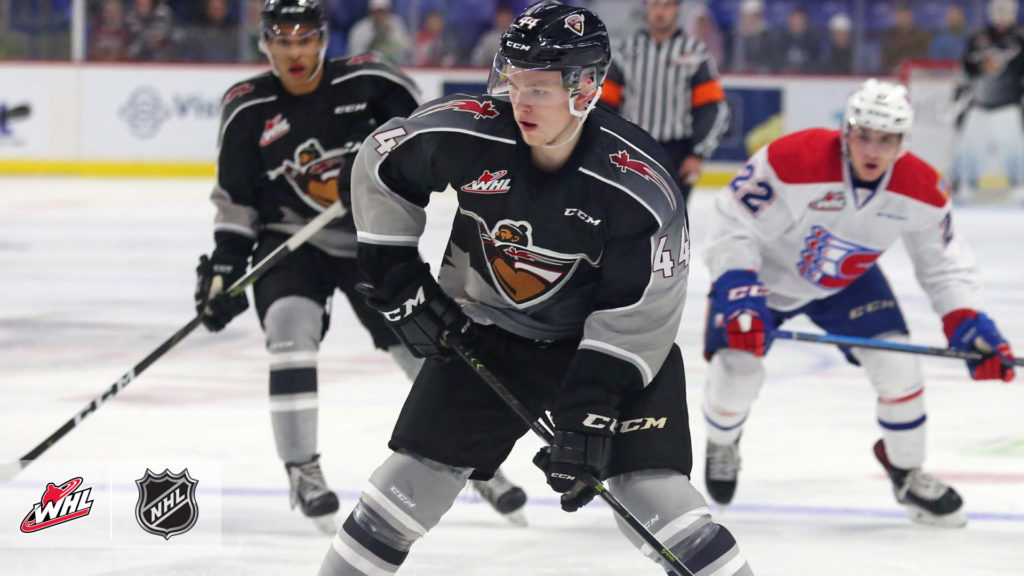 Vancouver Giants defenceman Bowen Byram has signed a three-year, entry-level contract with the NHL’s Colorado Avalanche. The Avs announced the signing Friday morning. Byram was selected by the Avalanche with the fourth-overall pick in the 2019 NHL Draft on June 21 in Vancouver.

“I had a really good feeling about [the Avalanche] from the start, so when they called my name, it was pretty cool,” Byram said following the 2019 NHL Draft in Vancouver.

“I was hoping it was going to be Colorado – it’s very similar to my hometown.”

An 18-year-old product of Cranbrook, B.C., Byram was NHL Central Scouting’s top-ranked defenceman and second-ranked North American skater ahead of the 2019 NHL Draft following an outstanding year in the Western Hockey League, in which he finished third in overall scoring among defencemen with 71 points (26G-45A) in 67 regular season games. Byram’s 26 goals were tops among all WHL blueliners.

The 2019 WHL Playoffs saw Byram lead the Giants to Game 7 of the WHL Championship Series, ultimately falling short to the Prince Albert Raiders in overtime. With 26 points (8G-18A) to his credit through 22 games, Byram led the WHL in playoff scoring in 2019 – an impressive feat for a defenceman who was only 17 years old at the time.

Byram enjoyed a number of highlights throughout the 2018-19 WHL season, including setting a Vancouver Giants franchise record when he became the first defenceman in team history to record five points in one game. On Saturday, January 12, the smooth-skating blueliner tallied two goals and three assists in a 7-4 win over the Kamloops Blazers to set the mark, surpassing the previous record co-owned by Jon Blum, Cody Franson, Paul Albers and Neil Manning.

On Saturday, March 9, Byram continued his assault on the record books, this time taking red pen to the WHL Official Guide. In a 4-3 overtime triumph over the Tri-City Americans, Byram notched the game-winner – his sixth overtime goal of the 2018-19 season – setting a new WHL record for most overtime goals by a player in one campaign. Previously, the record of five overtime goals in a season was held by Eric Fehr of the Brandon Wheat Kings (2004-05) and Deven Sideroff of the Kamloops Blazers (2016-17).

At the 2019 WHL Awards in Red Deer, Byram was named to the WHL’s Western Conference First All-Star team, further recognition of his incredible campaign. Finally, he was named recipient of the Sherwin-Williams Canadian Hockey League Top Prospect Award at the 2019 CHL Awards in Halifax, N.S.

Now, the next challenge for Byram will be making the Colorado Avalanche. His first shot at that will come in training camp this fall.

“I definitely have my work cut out for me [to make the NHL] but I am confident in myself, confident in my abilities,” Byram said. “I know I have to get better, too. It is going to be a challenge, but I am ready for it.

Byram has also represented Canada on the international stage, having skated at the 2017 World Under-17 Hockey Challenging, tallying five points (1G-4A) in six contests and helping Canada claim a silver medal. In 2018, he skated for Canada at the 2018 Hlinka Gretzky Cup, notching four points (1G-3A) in five games as Canada put forth a gold-medal performance. He also represented Team WHL at the 2018 CIBC Canada Russia Series, skating in both games, before then participating in the 2019 CHL/NHL Top Prospects Game in Red Deer.

We have signed Bowen Byram to an entry-level contract.#GoAvsGo https://t.co/08U2nmiEjg