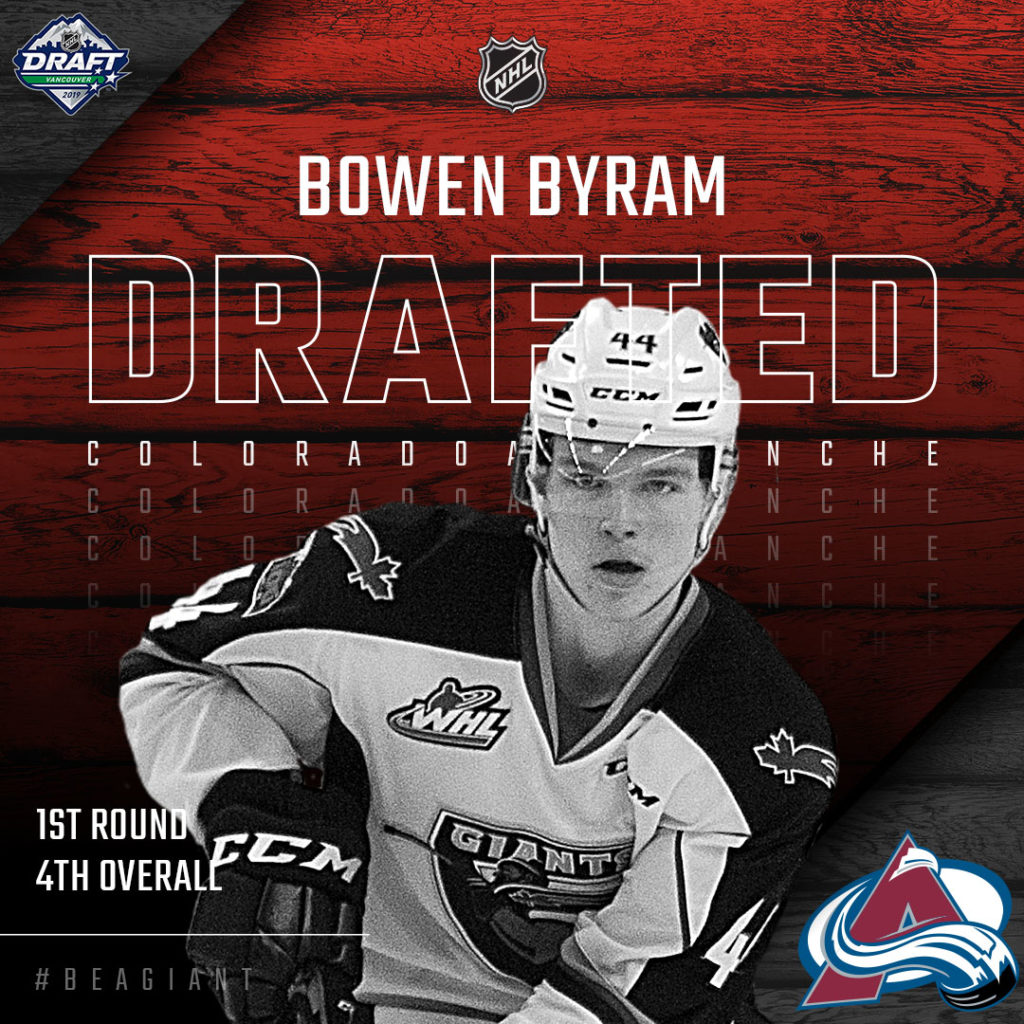 The Vancouver Giants are proud to announce that 2001-born defenceman Bowen Byram (Cranbrook, B.C.) has been selected fourth overall by the Colorado Avalanche in the first round of the 2019 NHL Draft.

In 2018-19, Byram set a new single season franchise record for goals by a defencemen with 26, which also led all WHL defencemen. He finished second on the team and third in the WHL (among defencemen) with 71 points. Additionally he set a new single season WHL record with six overtime winning goals. He then recorded 26 points in 22 playoff games, becoming the first defenceman in WHL history to lead the playoffs in scoring. In 138 career WHL games with the Giants, Byram has notched 32 goals and 66 assists for 98 points. He received the 2019 CHL Top Prospect Award after being named a first-team WHL Western Conference All-Star for 2019. In 2018 he was the WHL’s Western Conference Rookie of the Year nominee.

Internationally Byram’s resume is impressive. He has represented Canada on three occasions. In 2017 he captured a Silver Medal at the World Under-17 Hockey Challenge. In 2018 he helped Canada secure a Gold Medal at the Hlinka-Gretzky Cup. He also suited up for Canada at the World Under-18’s. Earlier this week Byram was one of 43 players and 12 WHL’ers invited to attend Hockey Canada’s National Team Summer Development Camp which runs July 27 – August 4 in Plymouth, MI.

“On behalf of the entire Vancouver Giants organization, we are all very proud of Bowen and are happy for his entire family that they get to celebrate this accomplishment together in his home WHL city,” said Giants General Manager Barclay Parneta.

Vancouver Giants Head Coach Michael Dyck adds, “Bowen is an elite player, a leader, and a relentless worker who always put the team ahead of himself. He played a big part in our success this past season.”

From the LEC with @WHLGiants to the NHL with @Avalanche, Bowen Byram has been selected 4th overall at the 2019 NHL Entry Draft. Congratulations, Bowen. #NHLDraft19 pic.twitter.com/mVDMAIOger

The first-round of the 2019 NHL Draft continues this evening from Rogers Arena in Vancouver. You can follow along here. Rounds 2 – 7 of the NHL Draft will take place tomorrow beginning at 10:00 AM.

You can't help but smile seeing Bowen Byram mom's reaction after he was drafted 😍#NHLDraft pic.twitter.com/E3DnJuguJ2

“Whichever team Bo goes to is not only getting an elite player but a great person. I could not be happier for him. He has worked so incredibly hard to get to this point. He will be a hockey player for a very long time.” – Alex Kannok Leipert (Vancouver Giants teammate)

“The bigger the game, the bigger he plays. His vision, skating ability and composure are traits that hockey teams regularly seek in young defensemen—yet seldom find. A true stud.” – Jawn Jang (Sportsnet 650 Vancouver)

“I saw Bowen Byram for the first time late in the season after he’d been hyped as a top draft prospect. Often it’s hard for players to live up to such lofty expectations, but in Bowen’s case he was everything I’d been told he’d be — and then some — as he was clearly the best player on the ice.” – Jeff Paterson (TSN 1040 Vancouver)

“Bowen Byram is a dynamic and exciting player to watch and cover. The defenseman who can seemingly do it all. Responsible in his own end but with the skill to push the pace and become a dangerous offensive threat. Opponents have to be aware of where he is at all times. He looks NHL ready.” – Andy Eide (ESPN 710 Seattle)

“The first time I saw Bowen Byram play I knew he was going to be a special junior and a sure-fire NHL’er. Even as a 16-year-old he played with a poise and confidence that belied his age.” – Les Lasaruk (The Voice of the WHL’s Saskatoon Blades)

@BowenByram congratulations cowboy. All the hard work and determination paying off. I’ve seen it with my own eyes. Even at 16 you were one of the hardest working guys on and off the ice. #NHLDRAFT
Proud of you bro. ❤️ pic.twitter.com/ZTPiJDI0tQ